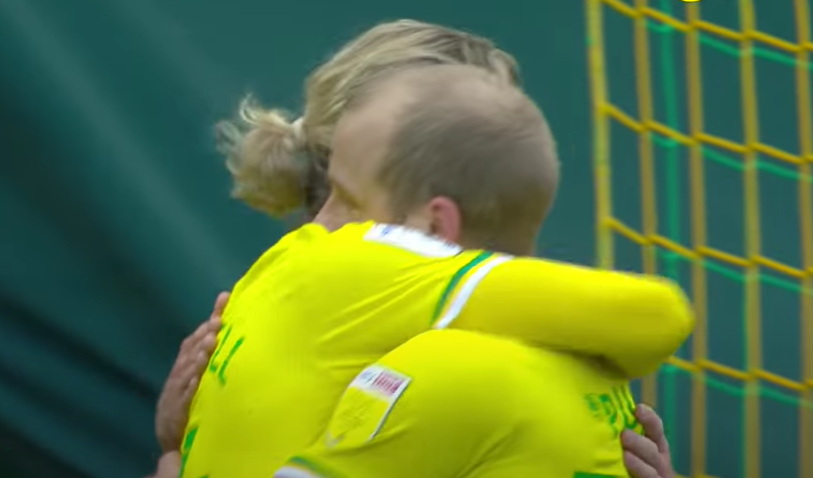 There was a comment from Ben Gibson in the week, posted on Instagram in the aftermath of the Brentford win, that summed up perfectly the mindset in the City camp right now.

“We have to win at the weekend so it isn’t wasted.”

That this conversation had been had was confirmed after yesterday’s game by Max Aarons: “We discussed after beating Brentford that there’s no point us winning that game and then taking our foot off the gas for, with all due respect to Luton, a team that’s lower down the table.”

And therein lies one of the greatest triumphs of Team Farke over the last eight months.

It’s only 224 days since we exhaled a huge collective sigh of relief after losing “only 5-0” to Manchester City on the final day of last season. Many feared the worst and that records would tumble as one of the worst Premier League campaigns in history drew to a sorry close.

Wikipedia has its own unique way of reminding us (as if we need it) how good or bad things have been; green being good, pink being bad. For example:

One can only imagine the mindset at Colney as that run unfolded and as it became obvious where it was leading us. To have worked so hard to achieve promotion and to then see it implode in such disheartening fashion must have been the ultimate test of ‘not too high, not too low”.

And to compound it, Stuart Webber and Daniel Farke then had just 48 days to reinvigorate a squad that was on its knees in readiness for a Championship campaign that, whether they liked it or not, would come loaded with expectation.

That they achieved this and some, to the point where, with the pressure gauge on 11, the team hits the home straight with a seven-game winning run, is a remarkable achievement.

And so, for all the technical excellence of this group, for all the silky, fluid football, for all the improved defensive organisation, it’s their ability to have turned around a losing mentality to one that’s the polar opposite that most astounds. Or, as Wikipedia puts it…

(Even more remarkable than the seven straight wins is that the Swansea defeat didn’t involve the Welsh Wizards getting and scoring a very dubious 96th-minute penalty.)

The latest of those wins, coming off the back of said midweek win over Brentford, was City’s eighth game in the space of 29 days – a hectic schedule in anyone’s book, let alone a team fending off a chasing pack who have been relentless in their pursuit.

I’m not totally au fait with the Colney mindfulness regime but whatever it is and whoever is responsible for refreshing and clearing the minds should be included in Delia’s birthday honours list.

It helps of course if you have the most technically able squad in the division but plenty of quality squads have buckled under the weight of Championship expectation and the relentless of the fixture list.

And besides, you could argue that Watford and Bournemouth should have squads of equivalent quality given they both made better attempts at survival last season and were both able to hold on to key personnel.

But, the respective gaps are 10 points and 20 points.

There is obviously work still to be done before the planning for next season can go full tilt but five clean sheets in the last seven games don’t hint of an imminent implosion. Quite the opposite.

Instead, I’m mildly intrigued as to how good this team can be in Championship terms and if it can tumble a few records in the right direction this time.

After 35 games of the 2017-18season, the much-vaunted and very expensively assembled Wolves team that included (and still does) a fair sprinkling of Portuguese internationals, had a record thus…

Remember how great we thought they were? How relentless and unstoppable? Well…

Okay, so we’re not scoring with the gay abandon of Jorge Mendes’ men but neither have we the financial might behind us that Wolves have used to turn themselves into Premier League regulars.

We may lack the swash and buckle of Wolves 2017-18 or even the Norwich City of 2018-19 but there’s a confidence and surety about this group that’s infectious and which will stand them in good stead for what lies ahead in the next few weeks and months.

And looking slightly further ahead if I dare… there are a couple of quotes from Farke that are worth remembering, made back in July 2020 when he was attempting, eloquently as ever, to explain why 2019-20 had gone so badly:

“In general, the teams that are promoted because of a solid defence find it easier to adapt to a higher level because they’re still solid and when they are then able to add quality in the offence, they have a good chance to stay in the league in the first season. They have more problems the year after, because, with no offensive plan, they struggle to take the next step.

“Teams who are promoted with a brilliant offensive plan and a possession-based side find it difficult to be successful in the first season because on a higher level they’re not that outstanding anymore. They have to do what’s not that much in the DNA of the players. It’s more about defending to be solid.”

So, while the possession-based part of that conundrum remains, if we go up it will be under the guise of one of those teams Daniel refers to that has a solid defence. And that, in his eyes, makes the transition from the best side in the Championship to Premier League survivors that little bit more do-able.

Also, his take on (without mentioning them by name) Sheffield United, was spot on.

As ever, only time will tell.

What we do know though is if it happens, there is no way next season will be as much fun or as joyous as this one, even though only a few of us have been there to see a live glimpse of it. And it still irks that there is a real likelihood that a packed Carrow Road will never get its chance to show its appreciation to Oliver Skipp for his contribution to this campaign.

But, in the here and now, seven-game winning runs don’t come along too often and neither do ten-point leads at the top of a division. In fact, in the history of Norwich City FC, I’m not sure it’s ever been this good.

So, soak it up. Savour the moment. Amid the gloom, our football club has produced something special.