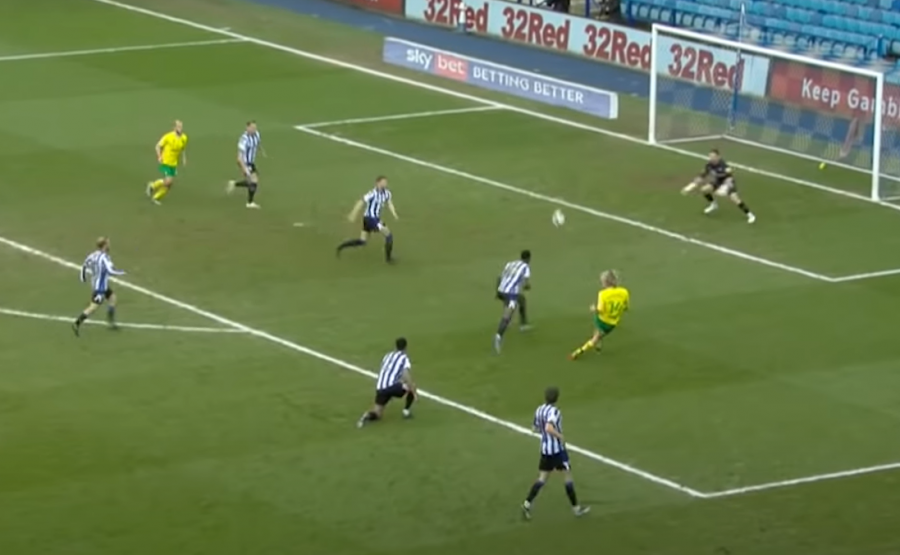 I woke up early on Saturday morning to put the laptop on and discover: Blackburn 0, Brentford 1.

Later in the day my mood didn’t improve as I sucked up Luton 0, Swansea 1. And then a Welsh side I possessed high hopes of on the day conceded late in stoppage time to make it Cardiff 1, Watford 2.

Okay City, we’ve got some work to do now as a famous cartoon Great Dane was often told by Shaggy.

At around 1300 yesterday my thoughts, dismal as they were, had moved along apace as the good old Sky half-time *freeze frame* suggested Sheffield Wednesday 1 [Rhodes, 7] Norwich City 0.

Tell me something I don’t know, hey?

Darren Moore had set up Wednesday to frustrate us and we were falling for it. A poorly cleared free-kick ended up at the feet of Jordan Rhodes who finished with aplomb, and after he and Tim Krul had remonstrated with the assistant referee in their own differing ways the goal [quite rightly] stood.

Rhodes didn’t celebrate over-elaborately but he knew what he’d done. I can’t say he felt guilty because I don’t know what was going through his mind but I think the same as many City-minded folks, as in he will always be one of us.

The Hillsborough pitch was a bit sticky and bobbly and let’s be fair we created very little in the first half. Could the omnipotent, all-seeing Norwich City slip on the *banana skin* much-vaunted pre-match by MFW friend and Archant football writer Connor Southwell be avoided?

Yes, it sodding well could and with such style. I am still in awe of our second 45+ performance as I write.

All too predictably for manager Moore, his side slowly but surely ran out of gas. They couldn’t keep up their awesome press from the first half and with a combination of fitness and method, we began to wear them down.

We were knocking at the door and went straight through it with two of the finest finishes in the same game I have ever seen from the boys in Yellow in over 33 years of holding a season ticket.

Firstly some fine work from Max Aarons and Emi Buendia allowed Ollie Skipp to play in Teemu Pukki who fired a Finnish rocket past fit-again Wednesday keeper Kieran Westwood, who stood no chance with a rising drive into the top corner.

MFW regular 1×2 will have loved that one.

As the blue and white heads dropped we asserted ourselves all over the pitch and there was an air of inevitability about the second, winning, goal if not quite the exceptional circumstances that surrounded it.

An absolutely brilliant tackle by Buendia on Josh Windass saw Todd Cantwell race onto the through ball. He was half-tackled but had a split-second to fire into the same corner as Pukki had earlier with his left foot.

Probably the finest goal I’ve ever seen from Todd and most likely the best that I shall ever see from the Dereham Deco.

From that moment, Wednesday’s game was literally up and they knew it. The horrible cliché of game management came into play and we carried it out superbly as the Owls didn’t get a sniff.

“We had to show a lot of character today after not starting the game as bright as we’d like to. You’re not always going to play brilliantly for every minute, so I think the second-half reaction was a real credit to everyone out there.

“I think they started well; it wasn’t just us not being able to get started. They were compact, them getting an early goal didn’t help, but I think the second half it was just the most important bit of showing character and a bit of heart to build on the foundations of pressing high. Ultimately, we managed to turn the game around.”

So let us take stock for a while. Daniel Farke’s official stance is that we have our place in the play-offs secure. Haha, Daniel

What it really means is that we are on a mighty 79 points with ten games to go. If you wish to believe Mario Vrancic we only need two more wins for promotion and I’m sure he reckons we’ll collect them against Forest and Blackburn.

For me, I’d like four or five more to put us around the 94 point mark, which should gain us the Championship trophy as well as promotion, which from my point of view is a subject for another article on another day.

And if it’s escaped anybody’s attention we’ve won eight on the straight and currently have the best goal difference in the Championship.

Who cares about miserable Saturdays with a Norwich City Sunday to follow?

Regular readers will know the type of music I’m into, but without this guy most of our favourite styles wouldn’t have existed and the lyrics seem so appropriate in this moment: