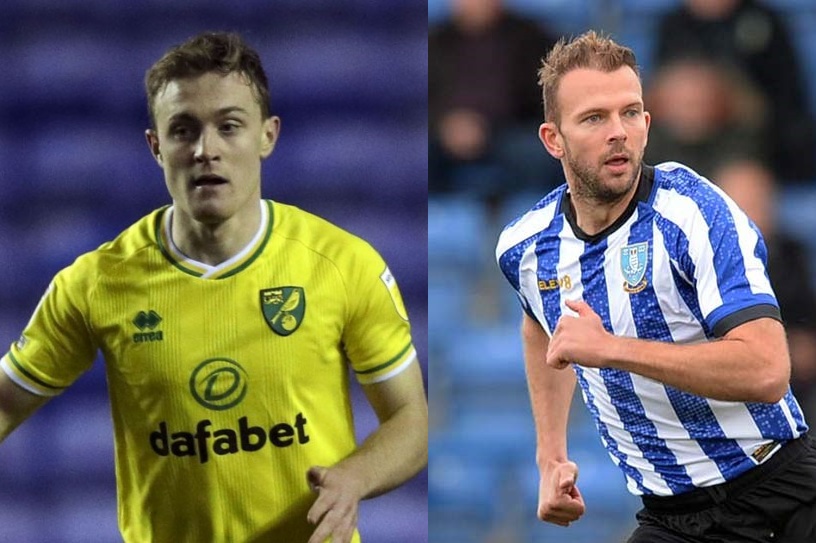 City came through a stern test to record an eighth win in a row at Hillsborough. So, how did the Owls provide such a problem and what did Daniel Farke do to combat it?

The key aspect in the first half was Wednesday’s aggressive press, a problem the Canaries have regularly faced this season. Darren Moore’s side, at their best from the start due to the energy they had, collapsed into a 5-4-1 when City had possession in their half, but quickly shifted to a 3-4-3 when Grant Hanley or Ben Gibson took a loose touch or dallied on the ball.

This meant the Owls could overwhelm the City’s two-man defence with their three forwards, and although they made no dangerous incisions by pressing, this was effective as a defensive strategy and even Gibson, known for his progressive passing, was neutralised in his attempts to start attacks.

Tim Krul was therefore more responsible than usual for playing forward passes, and although he found the full-backs on occasion, this was much less productive than Gibson’s passing, and Emi Buendia and Todd Cantwell were barely involved.

Here, with Norwich in sustained possession, the Owls’ midfield four are a clear unit behind Jordan Rhodes.

Just a minute later, Hanley controls the ball at knee-height and is set upon by Wednesday’s three high pressers. He was forced to go back to Krul, whose long ball was lost.

Another example of the overload Wednesday created in the Canaries’ half is present here, where City were again forced back to Krul.

Rhodes, clearly hungry to impress against his former club, was particularly good at this. He was tasked with the nullifying of Skipp, tracking him, and stopping his reception of the ball. This became a crucial nuance of the game, the battle between the ex-City man and the Tottenham loanee shaping the match.

Here, the Wednesday forward cuts off the passing lane between Gibson and Skipp.

The fact that Moore had his no. 20 do this was crucial, as it meant Rhodes could both press and suppress Skipp’s influence. Had he tightly man-marked the City youngster he would’ve been pinned back and prevented from pressing Gibson and Hanley, but his positioning between the defensive pair and the midfielder meant that, as long as his angles were correct, he could still press.

Skipp’s solution was to drop into the familiar third centre-back role I recently discussed.

This succeeded, but had knock-on effects that favoured the Owls. The main problem with this positioning is that it concedes dominance in the midfield, an especially relevant concern given Wednesday lined up with eight players through the middle, overloading the Canaries’ seven, even when you consider how centrally Buendia and Cantwell ended up playing.

However, Rhodes’ withdrawal after 68 minutes, despite being his side’s best player, hints at why such aggressive pressing falls down in the end.

The pattern of this period of the match, seven minutes after Teemu Pukki had equalised and just nine before Cantwell would score the winner, was the result of improved City fluidity and the tiring of the opposition.

The Owls’ press had earned them a crucial 1-0 lead, but their energy levels weren’t enough to continue using it as a defensive strategy. The other advantage to an early lead, that the losing side must come forward and leave space behind their defence, also couldn’t be exploited. As Wednesday’s two most effective counter-attackers – Kadeem Harris and Adam Reach – had been used as crucial cogs in the pressing machine, they lacked the required running power to counter; both defending the lead and extending it were off the table.

So Moore resorted to the classic possession kryptonite, a low defensive block. At this point Farke’s side came into their own against a familiar puzzle. Their trademark fluidity brought them back into the game.

Here, just prior to the equaliser, Wednesday are well organised. The man in possession is closely followed, there’s limited space and they have a 7v2 overload in the box. The problem with being so structured against Norwich City, however, is that they’re the opposite.

City’s left and right wingers are within eight yards of each other, their right-back is the furthest player forward and their left-back is well in advance of midfield. Among the chaos, Cantwell, pins back Barry Bannan and Liam Palmer, allowing Skipp to stroll forward and lay off for Pukki to score.

Had Rhodes’ brief been simply to man-mark Skipp this wouldn’t have been an issue, but his advanced positioning is an optimistic attempt to continue pressing even beyond the 60-minute mark and with a slender lead.

It’s worth noting at this point that this season’s most effective opposition defence were Neil Warnock’s Middlesbrough, who visited Carrow Road and man marked. Zonal defending is, for the most part, the best system in open play, but havoc can wreak when attacks lose their structure.

Lukas Rupp’s movement is a weakness in his game, and this took away from the fluidity. His lack of ability with his back to goal also became a problem when needing to break the Wednesday defence down, a factor that was less significant when City took an early lead and the Hatters had to chase the game. Dowell’s ability in tight spaces, such as here, were key in the development of attacks.

Although Sheffield Wednesday’s setup allowed them to push the Canaries to the limit, quality proved the most important factor. Farke trusted that his setup would come good and, thanks to some wonderful play by Todd Cantwell and Teemu Pukki, he was right to trust it.