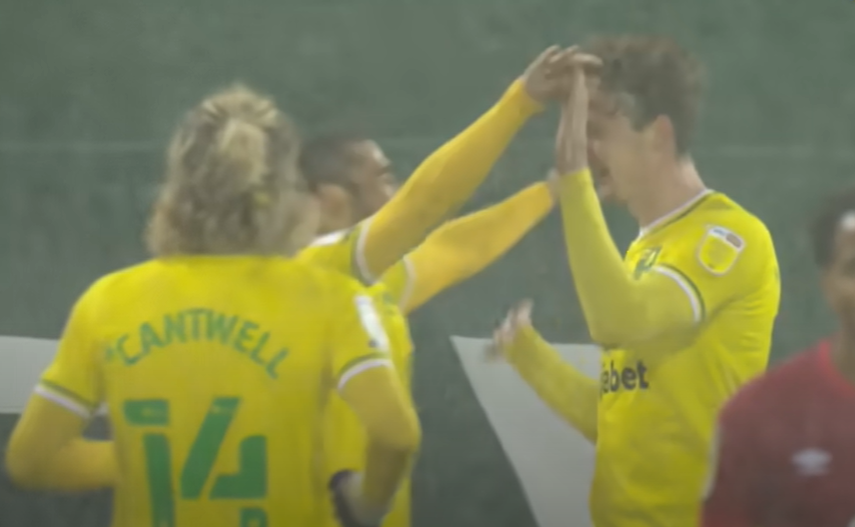 I’ve been away with work for the last few weeks. Seven games have passed – I’ve caught something of most of them but at other times I’ve only the odd text message to go on: ‘Dad, we’re murdering them…’

The snow cascaded down on a wintry Carrow Road but the Canaries really turned on the heat. Barely 18 months ago, the goal of the month competition featured two scored by the Under-23s, such was the paucity of goalmouth action from the first team.

City roared out of the blocks and by halftime, five worthy contenders were on the scoreboard for the April competition.

The Canaries appeared stung by the last-minute equalizer on Good Friday. They moved the ball with such precision and speed, barely a pass going astray. The Terriers looked terrified.

Perhaps the unluckiest man in NR1 is Xavi Quintilla. He was excellent on Friday; not in the squad by Tuesday, and the first goal illustrated why. With Dimitri Giannoulous in the team, City can move the ball from defence to attack so quickly.

As they broke down the left, Giannoulous ended up through on goal but his attempt was blocked. Todd Cantwell picked up the pieces and worked his way into the box before cutting the ball back to Pukki. 1-0.

Ten minutes later, the tenacious Emi Buendia won the ball on the right. A superb, rapid, tight exchange of passes saw the ball back at the Argentinian’s feet. A trademark long ball to Teemu Pukki who lashed home the second.

It got better. From a throw-in on the left, Cantwell fed Pukki who played it back to Buendia, who moved inside before unleashing a right-foot thunderbolt. 3-0.

And still City had more. After a slick midfield exchange between Max Aarons and Buendia on the right, the ball was cut back to Cantwell who lashed home from just inside the box.

And there could have been more. Buendia was fouled on the edge of the area. Kenny Mclean rolled the free-kick for the little magician to whip a curling shot which came back off the underside of the bar.

With minutes of the half remaining, and the snow falling heavily, the ball came to Buendia once more. Somehow with a little trick, he kept possession, played a 1-2 with Kieran Dowell to be through on goal,  before cutting the ball back for Dowell to hit home.

Huddersfield made changes in the second half and for a period it made them more effective.

Their first attempt on goal came on 56 minutes when Thomas forced a sharp save from Tim Krul.

Moments later, Oliver Skipp picked up the ball in his own half and powered forward, leaving Huddersfield players in his wake.  As he burst into the area he was brought down for a penalty. No doubt who was taking it. As Pukki slotted home to the keepers left, not a single Huddersfield player moved to cover any rebound.

By now, Huddersfield had used all their substitutes and Marco Stiepermann was on for Dowell, Jacob Sorensen for McLean. Huddersfield won a rare corner and won the ball in the air, which cannoned off Krul’s post. The Dutchman was at his best to block the follow-up.

Jordan Hugill now came on for Pukki and Przemysław Placheta for Buendia.

Sorensen picked up the ball in his own half.  Aarons made a superb run and the Dane picked him out with a long ball Buendia would have been proud of. Aarons exchanged passes with Stiepermann before producing a fabulous ball from the left for Hugill to tap in with his first touch.

For the last 10 minutes, it was all City as they controlled the game. They could have scored three as Onel Hernandez and Placheta all tried to get on the score sheet.

Rarely have a City team had such dominance for an entire game.

The first half has to be one of the most sublime I have seen in nearly 40 years of watching City. They backed off in the second half but still were in almost total control and scored another two goals.

Every player was superb and thoroughly deserves the inevitable chance in the Premier League.