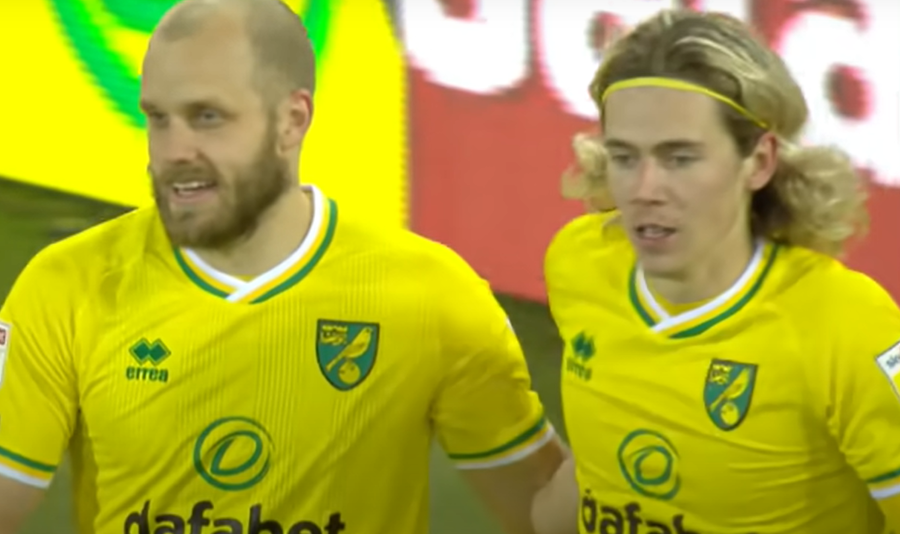 Wow. Where to start, other than to say this really this is the ultimate test of not too high, not too low.

So forget that. 99.9 per cent of City fans will need scraping off the ceiling this morning after, arguably, the most exhilarating 93 minutes of NCFC football in all of our lifetimes.

As I write, my dad and I are yet to debrief but I’m awaiting some Dick Gowers superlatives along the lines of “the best all-round performance I’ve seen in 75 years”. He’s a notoriously hard man to please but even he, like the rest of us, will be scratching around for some fresh adjectives to use this morning.

This wasn’t City edging to promotion. There was no edging about it. This wasn’t even bursting through the Premier League door to let off a few party poppers and pop a couple of corks. This was full-on smashing the door down but not before offering a two-fingered salute to Watford, Brentford and Swansea.

Not that Daniel Farke would approve of such bravado of course but for the Canary Nation these are special times and should be lauded as such. Bravado et al.

The head coach remains the epitome of class and if we weren’t bursting with pride enough, to hear him speak post-match in such measured and respectful tones towards an opposing manager who he had just shellacked, was quite something. And this after he’d spent a few minutes explaining to Andrew Omobamidele, with celebrating players all around, why he’d taken up a wrong position from a throw-in with City 7-0 up.

A five-minute snapshot of why we are where we are.

We’re well run, we have good players, but at the heart of it all is a man who has an acute understanding of football and how he wants it played but who also, crucially, has tapped into what makes Norwich and Norfolk tick.

Throw into a hat all the qualities we like to see in our manager, mix them up, and out pops Daniel Farke.

Is calm and measured ☑

Is proud to be the head coach of our club ☑

Some coaches pride themselves in making the technical area a warzone. Daniel keeps his own counsel and winks.

Some coaches shout, bawl, gesticulate and probably confuse. Daniel observes, studies and, if necessary, has a quiet word.

Some coaches spend 90 minutes berating the fourth official while in a near-permanent state of apoplexy. Daniel occasionally makes his feelings known minus the bulging neck veins.

So while the players rightly take the plaudits for the demolition job to end all demolition jobs and Stuart Webber gets (quite rightly) lauded for the best four years of work in the history of football, we happen to have a brilliant head coach who fits us like a glove.

There’s nothing really I can add regarding the sheer technical brilliance of last night’s performance that hasn’t already been said, so I’ll leave that to others, but the honesty and lack of ego in this group is something really quite special.

A cliché it may be, but they appear to genuinely revel in each other’s successes and triumphs and not just their own; a trait beautifully illustrated by the double one-two between Kieran Dowell and Emi Buendia that ended with the former scoring his second goal of the campaign.

Unselfishness and humility are rare qualities in professional football but this group have both at their very core. It doesn’t happen by luck though. Webber’s no dickh**d policy has paid handsome dividends, with technical excellence only being one element in the decision to recruit or not recruit.

And is why characters like Jordan Hugill, who has only really been a bit-part striker this season after excelling at QPR a year ago, remains an integral part of the group; in his own way every bit as important as those who grab the headlines week in week out. His goal was well deserved and warranted its celebration, especially as it involved Max Aarons popping up as a bona fide left-winger.

So one of the great ones. One that will go down in the record books.

That we’re not there to see it unfold and show our appreciation is a tragedy. But let that not detract from what an outstanding achievement is just four points away.