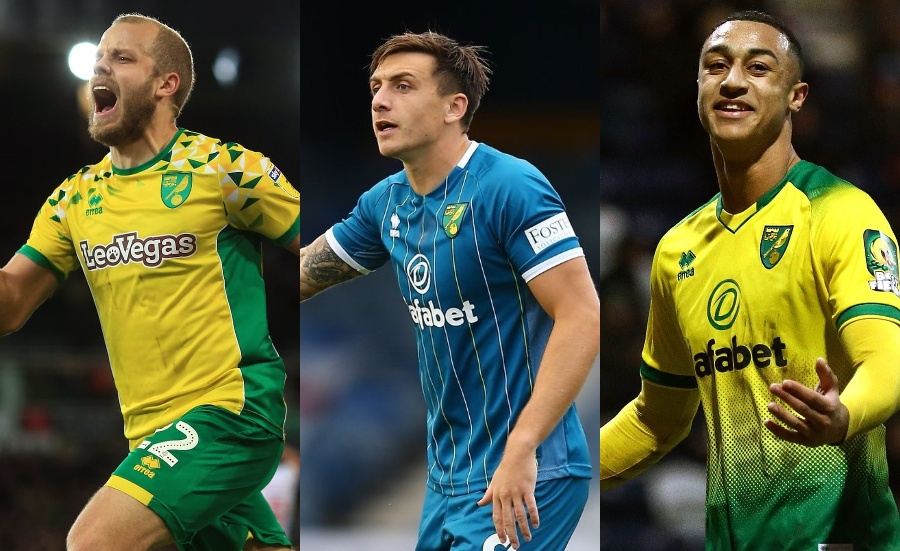 At the start of the season, Daniel Farke outlined the goals target his strikers had to hit: 30 between them. He didn’t care who, how or when, as long as Teemu Pukki, Jordan Hugill and Adam Idah’s tallies totalled 30 or more.

On Tuesday night, they hit that target.

Pukki’s hat-trick clinching goal, the sixth of an emphatic 7-0 drubbing of Huddersfield, got them over the line, before Hugill’s tap-in made it 31. To absolutely nobody’s surprise, the Finn has carried the majority of the burden, netting his 25th of 2020/21 from the penalty spot.

The 31-year-old has shown, yet again, why he shouldn’t be underestimated this term, leading the line impeccably when many had doubted his ability amid that miserable relegation. They were right to at the time but any suggestion that Pukki’s race was run has been emphatically destroyed, as he’s posted minutes per goal numbers (122) even more impressive than in 2018/19 (132).

When examining Pukki’s goals this season there’s also a new element of variety, when previous ‘one-trick pony’ criticisms had been valid. In 2020/21 our number 22 has scored chips, headers, tap-ins, trademark low drives and some net busters. Increasingly there’s a feeling that Pukki is able to adapt his preferred finish depending on the situation, an encouraging indicator of development in an experienced 31-year-old.

The question as to the potential of Premier League productivity remains as unanswered as it was in 2019, the test of consistency yet to be dealt with now the one of ability has been passed. Back-up will likely be looked for in the transfer market, although the role of understudy may well go to the Canaries’ current number 9.

Hugill has only managed four goals this season but has stepped up when needed, most notably in the absence of Pukki in January. The main man was out but Hugill stepped up with two fine poacher’s goals against Bristol City and was largely responsible for that 2-0 win at a crucial stage of the promotion race.

In a similar situation, with Pukki out of form and the waster of a penalty in a 1-0 loss to Derby, Hugill stepped up in the following game, leading the line in a scrappy battle with Rotherham before slotting home a stoppage time spot kick to seal a 2-1 win. Upon his signing it was pondered whether Hugill’s brand of robust attack would fit Farkeball, but what he’s created is a refreshing new option in the Norwich City playbook.

The case of Adam Idah is a slightly complex one; a tale of frustration and injury but also of promise for a newly integrated first-team member. Still only 20 and with plenty of time to improve, Idah scored the first goal of the 30 and also potentially the scrappiest.

Selfless Pukki play allowed the Irishman to open the season’s scoring in the 1-0 win at Huddersfield, before he poked home a rebound from a corner at Wycombe’s Adams Park.

Idah will be frustrated that he hasn’t contributed more in a goalscoring sense but his solitary contribution at the John Smith’s Stadium is worth more than Pukki’s three in a comfortable thrashing, and for a man of his age to be providing such serious competition is a genuine achievement.

As far as his goalscoring peak, we may have to wait a while. It’s hard to see an array of top-flight opportunities for Idah next season and a loan may be the best option, but there’s no doubting his ability as a future Norwich City starter. Idah may only have scored twice, but he did win City the most valuable prize of them all: three points.

So, what’s the target next season? Let’s base it on points. The generally accepted promotion guarantee is 90, while for Premier League survival that’s 40. Applying Farke’s rule as a percentage, that’s a target of 13. In 2019/20 Pukki and Josip Drmic combined for 12, suggesting this may be on the low side.

The reality is that City’s other players must step up to the goalscoring plate. Last season Onel Hernandez managed one league goal, as did Emi Buendia, Kenny McLean and Mario Vrancic. Marco Stiepermann didn’t score once. They are players that are certainly capable in front of goal, and attackers Kieran Dowell and Przemyslaw Placheta have been added.

Pukki, Hugill and Idah’s comfortable meeting of Farke’s 2020/21 target has shown just how capable they are. Now it’s time for others to take responsibility. The survival mission starts now.

The Mouthpiece at it again #ncfc

🗣️ “Historically, this football club has found a way to get out of the Championship and we need to go and do that again."

NEW - “This club is a laughingstock" ... "A fish rots from the head down"
https://norwichcity.myfootballwriter.com/2022/05/24/this-club-is-a-laughingstock-a-fish-rots-from-the-head-down/ #ncfc @MickDennisReal

James has been such a great player moving on as & when right !Agree with you & he would be a great asset for either ManCity or Liverpool I think. Both coaches would enhance his considerable talent. He loves to learn🥰💛 #ncfc