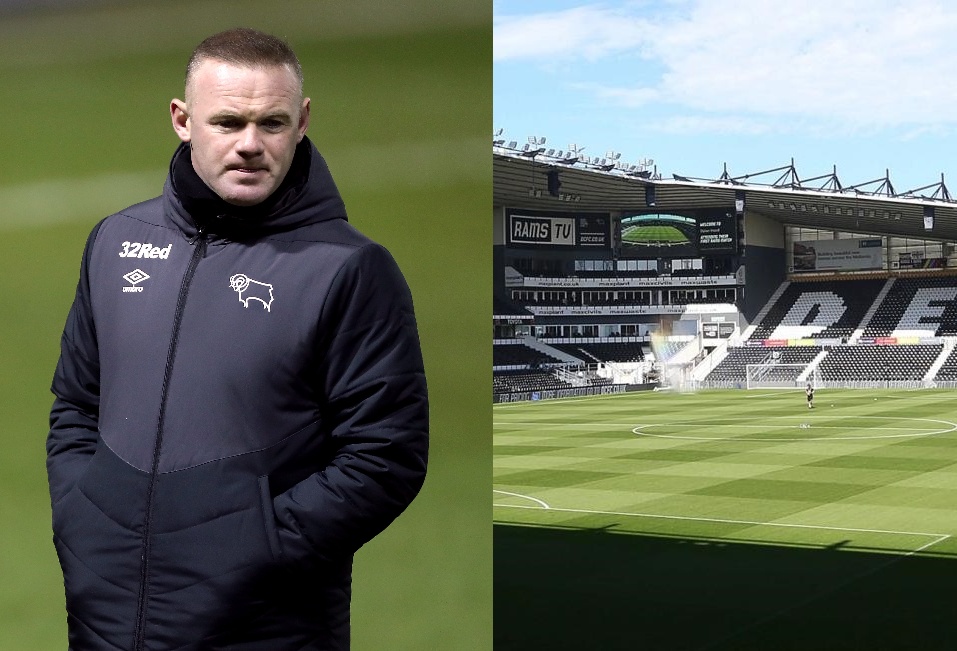 It was time to get the band back together for this week’s preview. Off the back of the most thrilling Tuesday evening since the dawning of time, Colin Michael, Andy Delf, Don Harrold and John Scent have dusted down their instruments, scraped themselves off the ceiling and given us their considered thoughts ahead of City taking on the Rams of Rooney.

Colin: What a 90 mins! Tuesday was very special and Emi’s ball for our second will live long in my memory. However, watching alone just isn’t the same, constant text messages plus a couple of calls to watching daughters helped but for me without that eruption of noise e.g. Simeon’s knee v Derby or McVeigh’s winner v Wolves, etc, never quite the same. However, that said, our first-half display was simply mind-blowing. Daniel Farke’s after-match interview was also remarkable and made me feel great pride to be a fan of NCFC.

Andy: In terms of great victories the Man City game during our last visit to the Premier will take some beating because it wasn’t just the team on the pitch that won that match the noise and passion the crowd generated that day helped in that win. Something I will never forget. This Huddersfield win, my word. It was as pure, beautiful, ruthless and as joyful football you could ever hope to see. It had everything a football supporter wants from their chosen sport

Don: It’s right up there. Maybe, given the prize at stake, the first half against Middlesborough in the play-off edges it but I wouldn’t argue. I’m still buzzing about it, but my book of superlatives has been exhausted and I have no unused adjectives available.

John: Definitely up there with Bayern Munich, the play-off final, Man Citeh last season (gosh, that seems eons ago now), Leeds away in the ’90s under Mike Walker was also particularly impressive. However, Tuesday seemed to be the culmination of everything the squad had worked toward this season. It was (in no particular order):- awesome, imposing, marvellous, awe-inspiring, impressive, grand, breathtaking, admirable… even glorious in the way that we continued to pummel them despite being five up at half-time!

Colin: Trouble behind the scenes at Derby, they’ve been a nearly team over recent seasons but are in trouble now. I’m not expecting it to end well for Wayne. We mullered them at Carrow Road earlier in the season then lost to a Rooney rocket, prior to that after dominating again we succumbed to the floodlight failure and were undone again by Lampard’s bunch of loanees, so we owe them one big time. They don’t score many but won’t fancy playing us and are on a downward trend I feel.

Andy: I have to confess, other than the home match against Derby I haven’t been able to muster the slightest enthusiasm to watch them again. This makes it difficult to really offer a balanced consideration of how they might play or chuck a spanner in the progress of our magnificent lean mean football machine. Can our boys replicate the performance against Huddersfield? I don’t know but I bet Rooney is working on an 11-man defence. We will whoop them.

Don: The first game is, I think, the only game I haven’t seen live this season as I was helping my daughter move into a flat on a rainy day in Sheffield, listening to updates on the radio. There was something inevitable about Rooney scoring a brilliant last-minute free-kick to win. I believe it was his final goal of his career so, from our lofty perch, I find it hard to begrudge him it. However, it did leave us with four points from the first four games and some fans were restless. The fact that that it has, so far, been our worst four game run of the season is a great testament to Farke and the team. Derby are on the same points as Huddersfield, having played a game more, suggesting that this should be comfortable for us. I know football doesn’t always work like that, but I can’t see any way they will beat us.

John: With the Championship being as unpredictable as ever, and the consistent inconsistency of the officials, anything is possible. I thought we’d be up to do a number on them after their heist of the points at Carrow Road, but it seems we peaked a few days too soon. But we’ll win, and move on.

Colin: I’m not a big fan although have met him, (in a hotel bar) and seemed very decent. I think he will make a success but needs a stable club. My advice is he should be working with Under-23s under the guidance of a top coach. As for Gary Neville…

Andy: I quite admire Rooney, I didn’t think he would last a week in the coaching side of a football club, but he  seems to have the players on his side and as long as he keeps to the coaching side and doesn’t try to emulate Gary Neville’s venture into big club management he should be okay. Steven Gerrard is doing his apprenticeship in the Scottish Premiership, Wayne could be alright in that league but I don’t see him managing a Premier League club in England. John Terry and Frank Lampard are still waiting for any vacancies that may crop up with a club brave enough to take a relatively young manager, so Rooney is probably a long way down the list.

Don: I think that Wayne Rooney has never really been given the recognition he deserves. He’s Ingurland’s and Manyoo’s record scorer and was always a real team player and won more trophies than most players could dream of. He’s also more articulate than seemed possible when he broke through as a 16-year-old lad. He seems to have done a decent job in taking Derby from looking like a strong relegation candidate into a side that will probably stay up relatively comfortably. I wonder if he’ll still be there next season as the club is getting new owners, but I doubt there will be a shortage of clubs willing to offer him a chance. I don’t think he’ll be a Gary Neville.

John: Despite a few mistakes along the way in his playing career, he seems to be quite a deep thinker about the game. He could well prove to be a really good manager

Colin: Promotion? Next Saturday, home to Bournemouth will do nicely for me and then beat Watford the following Tuesday to seal the title.

Andy: It doesn’t matter, it will happen when it’s meant to. It would be brilliant to secure the auto spot this weekend. It would be even better if we secure the title on the night we give Watford a sound thrashing.

Don: Obviously, sooner rather than later. I doubt it will be this weekend as too much has to go right for us. But it will definitely happen and I can wait another week or so.

John: It would be lovely to put it to bed this weekend, but (again) we’ll need others to help us out. Surely the dream would be to win on Saturday, and then clinch promotion in front of the lovely people from SKY with that late kick-off against Bournemouth, with the title to follow the following Tuesday against Watford (again on SKY).

Colin: Celebrating alone wont be great but at least I can shout the house down! On 24th April I should be with my daughters so if we have to wait until the QPR game I won’t mind. We’ll put up the yellow & green and blast the car horn a few times plus pop a cork or few! Memories of past promotions will no doubt surface including that glorious day at Wembley in May 2015.

Andy: I suspect that in a roadmap compliant way a glass of sherry may be raised. Wouldn’t it have been great to celebrate the open bus top tour with the team and all our mates in the City again.

Don: I’ll be watching with Buddy the Border Collie and might have a zoom beer with my brother in Panama – how’s that for social distancing?. My wife and daughters have no interest in football whatsoever so my celebrations will be low-key, but the pubs are open soon and there will be opportunities to celebrate in Norwich with friends later.

John: I’ve already got the most expensive bottle of wine I’ve ever invested in (Flint Vineyard!) cooling in the fridge. My wife also has a season ticket, but doesn’t drink so it’s mine, so all mine!!

Colin: £30m won’t buy loads but a striker/goal scorer, Lucas Joao maybe or spend the lot on Oliver Skipp. I expect Max to go and Bali Mumba to come in and, hopefully, Sam Byram can recover too as I rate him. All teams struggle when centre-backs get injured but we have good cover now. I’d still have Jordan Roades as centre-forward cover; the guy has goalscorer’s instinct which we have lacked this season (Huddersfield apart).

Andy: Three positions I think are key to be strengthened are, a back up striker, another creative midfielder (to replace Buendia) and a really strong defensive midfielder.

Don: I think that Zimbo will probably be ushered out of the door as I think Andrew Omobamidele has shown more than enough to have overtaken him in the pecking order, so a centre-back is essential. A chunk of money to pay a loan fee to Spurs to get Ollie Skipp (if possible) for another season seems wise otherwise someone to take his place. £30m doesn’t get you very much in the way of Premier League players, but I’m sure Webber and the recruitment team will have more up their sleeve this time than in our last season there. I have a feeling that Emi will stay and Max will leave, so a replacement there will be necessary, although Bali Mumba is promising (where’s Sam Byram?).

John: Depends of course on who stays and who goes. If it’s to add to the current squad minus Skipp, then a centre back (Omobamidele is a great prospect, but as we know the Premier League is an altogether different beast); and a defensive midfielder to replace Oliver Skipp. Given Tuesday’s performance, the attacking third will score goals anywhere!

Colin: City, a scruffy 2-0 win on Saturday and a final points total of 97. with Emi taking the Player of the Season award!

Andy: I think we will travel home with all three points on Saturday after a fine 3-1 victory finishing the season with 101 points.

Don: I think it will be comfortable with a 2-0 win and I’m going for 101 points for the season – in hope and expectation.

Cheers lads. Brilliant as ever. OTBC.