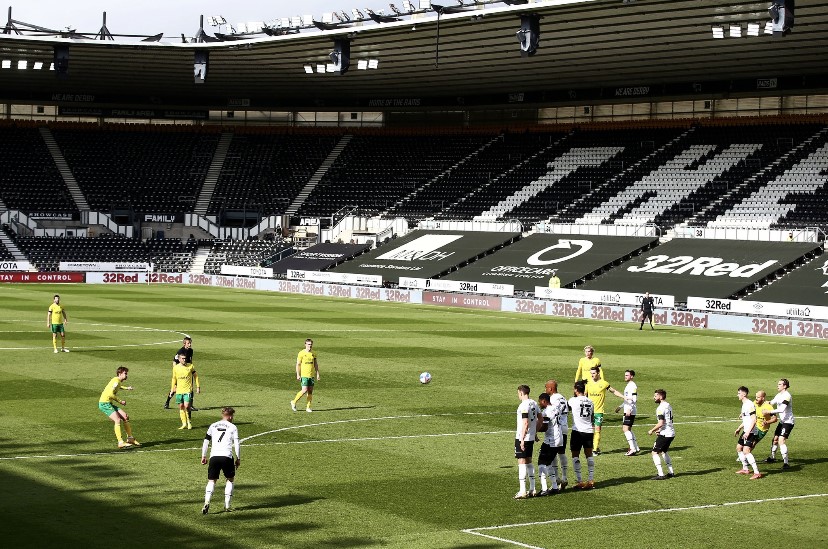 Norwich City have players from quite literally all over the world, from Cuba to Greece via Poland, Finland, Argentina and several other countries too. But the win we ground out against *the Rams of Rooney* [c. G Gowers] was to a large degree very much courtesy of our brace of Scotsmen.

Granite Hanley from Dumfries and Mayor McLean of Cambuslang – an outlying suburb of Glasgow to the uninitiated – were outstanding in a second half where we were harried out of our usual fluid game by the men in white. That’s possibly the best I’ve seen from Hanley to date and Kenny wasn’t far behind him.

As far as our trip to Pride Park is concerned we did just enough to win. A superb up and over the wall free kick from Kieran Dowell on the edge of the *D* was a goal fit to win any game and I’m sure Mario Vrancic would have heartily joined in with the celebrations from the bench. He’d have been proud of that one would our Mario, and it will prove to be just as valuable as that Vrancic special against Sheffield Wednesday two seasons ago.

We took our collective foot off the pedal after the break, particularly after Dowell and Emi Buendia were hooked around the hour mark. Buendia had received yet more targeted stick, not least when Andre Wisdom [anyone remember him?] followed through after winning the ball. It looks a lot nastier on the replays – have a shufti.

Emi returned to the bench complete with the inevitable ice pack so it was obviously the right decision from the Head Coach but that double change hardly helped the rhythm of our passing game. Marco Stiepermann and Pepe Placheta offer different things, of course.

Patrick Roberts and Todd Cantwell were also having a tit-for-tat in terms of naughties. No love lost there I would suspect.

We saw both sides of Tim Krul. A flying save from a fine shot from Teden Mengi brought out the best in Holland’s Number One, but an incredible gaffe in stoppage time so nearly could have proved fatal. The otherwise excellent Andrew Omobamidele put Krul in trouble down by the corner flag and he was rinsed by Colin Kazim-Richards who laid it off to the unmarked Graeme Shinnie.

Preston again? No, Shinnie shinned it over the top of the gaping goal. Relief all round.

With Watford winning on Friday, Brentford strolling the lunchtime fixture and Swansea destroying Preston that will turn out to be a very important win for Norwich City indeed.

For probably the very first time this season Daniel Farke acknowledged how close we are to the Premier League once more.

“If I am honest 90 points has always been enough in the past to get promoted. That is why this was a big win. To bring it over the line,” he said afterwards.

“We have some strong sides to play and we are still a young side. I think the pressure is away now.

“My gut feeling is we will now celebrate promotion to the Premier League at the end of the season. But it is not completely over the line so we cannot fully relax.

“We need maybe two more points and it is no guarantee but I don’t see us losing our last five games. We have to go on with the same focus and confidence and then I am quite confident we will be in the Premier League.”

Now the dust has settled and a glance at the Championship League table makes for a very satisfying feeling – as it has done for several weeks now – it’s so very nearly time to concentrate on what might happen next season, but that’s one for the near future, not right now.

The only piece of music I can really leave you good MFW readers with just now is this one, even if the band are playing in Derby County colours, and I’d like to dedicate it to all supporters of Watford, Brentford and Swansea everywhere.