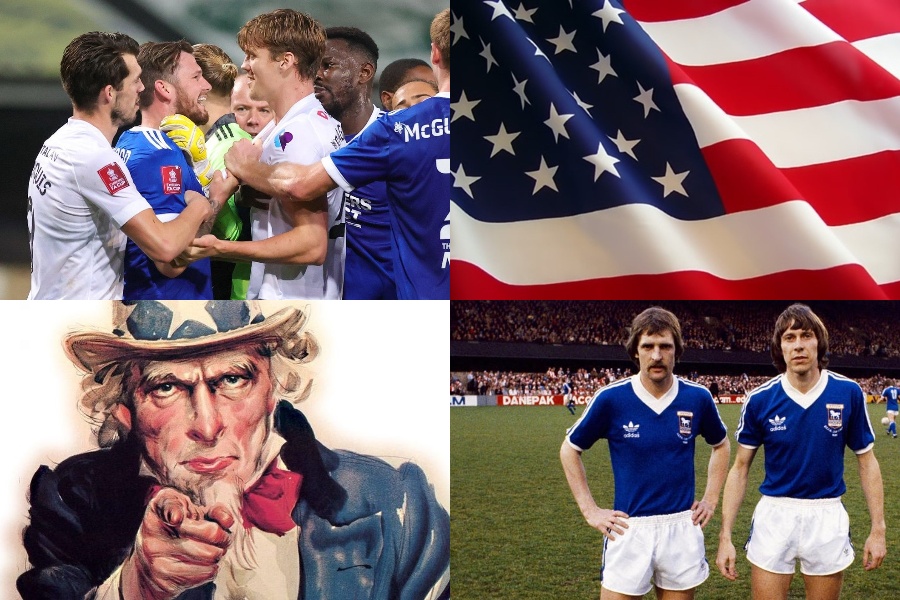 At long last something’s stirring down the A140.

After more than a decade in a comatose state, Ipswich Town have been given the kiss of life by Uncle Sam

With their local rivals about to rejoin the Premier League, this revival comes not a moment too soon for the Tractor Boys who for several years have been living in the Canaries’ shadow.

From our lofty perch, should we care about what’s happening to a club seemingly marooned in the third tier of English football? They claim we obsess about them but to my way of thinking if you can’t delight in the misery of your rivals or worry about an upturn in their fortunes, you’re not a real football fan.

I don’t know enough about financial matters to judge whether this takeover at Portman Road is a good deal or not. My instinct is that relying on the Arizona State Pension fund to boost your coffers is hardly a sure fire guarantee of success.

What can’t be argued is that this American investment has certainly raised spirits in Suffolk. But then so did Marcus Evans’ involvement back in 2007 and that didn’t end well. That was a false dawn and history might teach their supporters it’s perhaps advisable not to boast about potential new found wealth and best not wave dollar notes in the neighbours’ faces.

Let’s enjoy being in the ascendency because nothing lasts forever and their time will come again. I can well remember the days when going to Portman Road was a fairly joyless experience if you were a Norwich fan. The days of Bobby Robson and his excellent Ipswich Town team. Names that rolled off the tongue – Beattie, Burley, Butcher, Brazil, Mills, Mariner and Wark. And in my opinion two of the best foreign players to play in English football – Muhren and Thijssen.

They, of course, love to talk about their history while laughing at what they regard as our empty trophy cabinet. What many of their fans don’t realise is that their honours list would be even more impressive had it not been for Norwich. I’m convinced Ipswich would have won the league title in 1981 but got sidetracked by a run in the UEFA Cup (which they won) and FA Cup (semi-finalists). They were neck and neck with Aston Villa in the league but three games from the end of the season, a Justin Fashanu goal gave relegation-bound Norwich a 1-0 Carrow Road victory and Villa went on to take the title by four points

Add to that, beating them in the semi-final en route to winning the League Cup in 1985 and in the play-offs before another City Wembley triumph 30 years later, it’s fair to conclude that in the really significant fixtures between the sides, Norwich have been the dominant force.

Yet much as I dislike them on derby day, I’ve taken a more charitable view of our Suffolk friends at other times. In a previous life, I often had to work at Portman Road and always found people at the club both welcoming and hospitable. You can’t deny them their history and just as they were superbly managed by Bobby Robson, they were extremely well run by the Cobbold family. I get the impression Norwich are currently viewed as a club on which to model yourselves; the same could be said of Ipswich in days gone by.

I can only imagine what the Cobbolds would have made of their beloved Ipswich relegated to the third division for the first time in more than 50 years. I was at Portman Road when Birmingham City struck the fatal blow two years ago and it felt like intruding on private grief.

Talking to supporters after the game, half of me felt sorry for them. They were decent folk and just like us they invest emotionally in their local football club and were genuinely distressed at their team’s decline. The other half of me thought it absolutely hilarious they’d been relegated!

Since then, not much has changed.

Next season Ipswich will still be in League One (almost certainly); Norwich will be in the Premier League again (definitely). Great for us but you sense renewed optimism south of the Waveney. Paul Cook definitely hasn’t made the immediate impression some felt he would but with so many of his players soon to be out of contract, this summer gives him the chance to wheel and deal to try and put together a squad capable of a sustained promotion challenge next season.

I’m assuming he’ll still be there, although his failure to front up for interview duties before and after the weekend game with MK Dons suggests difficulties remain. It’s since emerged the takeover came as a surprise to him and some fans were left wondering whether his tenure at Ipswich might be a brief one.

However, it appears the new owners are happy with his appointment although what funds they’ll make available he’s yet to discover. It’ll take more than the feel-good factor to turn things around at Portman Road but Cook has promotion form on his CV and can surely be expected to be more successful than Paul Hurst and Paul Lambert in resurrecting Town.

Whether they can bridge the gap, we’ll know more in a year’s time. Will we have avoided relegation; will they be back in the Championship? Can we hope to have held on to Daniel Farke and Stuart Webber? Lots of unknowns.

Important questions, but for another day. In the meantime let’s be big enough to allow them their American dream and the promise to make Ipswich great again. One can only admire the confidence of one of their new owners – the rather exotically named Berke Bakay – who, in a tweet, invited Didier Drogba to be his guest at Wembley when Ipswich contest the play-off final.

No wonder the locals are lapping it all up and waving their Stars and Stripes.

We’re rather more reserved up here in Norfolk and will quietly raise our flag above Carrow Road in August. It’ll be the Premier League one!