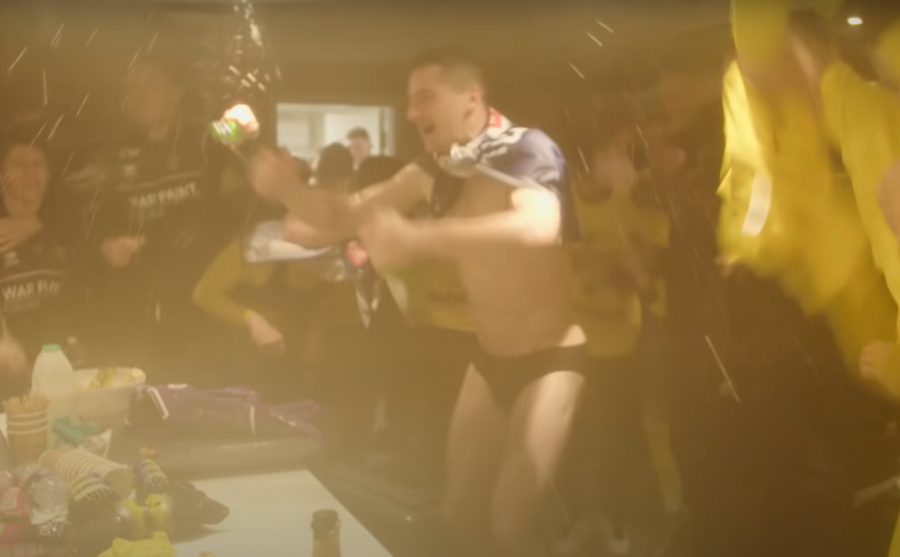 Saturday has to go down in my personal history as one of the strangest, most emotional days I can ever recall. Passing my driving test [first time, natch], securing my first job in journalism, the births of my wonderful children and seeing Led Zeppelin at Earls Court in 1974 run it pretty clos,e but I think April 17 2021 is certainly right up there with all of them.

Looking at the lunchtime fixtures I wasn’t really too optimistic. Watford at Luton, Brentford entertaining Millwall and Swansea facing rock-bottom Wycombe in Wales left me thinking: well, at least Watford might drop points.

Mrs P had a couple of her friends round so out of *politeness* I followed the timeline intermittently via the EFL website – you know, the one with the little green lines running under the live scores as the minutes played in the matches rack up.

At half-time, the oracle stated some surprising but pleasing news, as in 1-0 Luton and a brace of 0-0s.
Off I went for a quick shower, emerging modelling my lucky grey NCFC training top. Other clothes were worn too – more on that later.

The next time I checked the scores were the same, barring Swansea 0, Wycombe 2. Surely that wouldn’t remain the same? No, it didn’t. But I saw Watford had received a red card, which turned out to be the only one of those that pleased me that day.

The final five minutes or so of EFL live left me glued to the chair as Swansea had scraped it back to 2-2 and Millwall held on to a thoroughly well-earned 0-0 in West London.

The clocks registered 90+9 and 90+8 respectively until the magic words FT eventually appeared. It took all of a nanosecond for this to register and if the neighbours objected to my dancing around the garden, tough $hit. Both our black dog and the white one started howling in joyful celebration too, so I guess we’ll receive a visit from those wonderful, dedicated and hard-working folks at Norwich City Council in the very near future.

The amount of messages I exchanged nearly froze both inbox and outbox, including a couple from mates I hadn’t spoken to in ages.

Of course, those naughty Cherries somewhat spoiled the evening for us, but frankly my dears, I don’t give a damn.

The dismissal of Dimi Gianoullis left me in a state of shock. Daniel Farke shouted out to referee Graham Scott *you’ve ruined the game* by all accounts and he was right. The incident also caused me to develop an instant hatred for a troglodyte called Pearson which will stay with me for some time to come.

Maybe the decision was technically correct – it looked that way on the replays – but my view in realtime would have been no cards, a stern warning for Dimi and an even sterner one for Pearson who had already gone down like a sack of spuds three times in the first 15 minutes.

At the end of the day we lost for the second time at home this season, but so fri.ggin’ what? Sick again? Oh no.

We’ve attracted accolades from *the best team ever to grace the Championship* from pundits and journos alike down to *a yo-yo team who are as grey as it comes* from a myopic Crystal Palace fan. In Norwich and beyond, there’s a whole lotta love for this team.

As for the play-offs, my heart would love Barnsley to prosper, while my head, unfortunately, says Bournemouth. But let’s all thank the deity of our choice that we’re not involved in that particular competition.

I know Gary noted this yesterday but I’m going to have to add my tuppenceworth. As happy as I am, I never want to see Mayor McLean in his shreddies again. I know you can’t play football in boxers, but behave yerself Kenny, please. Budgie smugglers are so last century.

Anyway that was my Saturday and if any of our beloved MFW readers want to share theirs with us we’d be glad to here from you.

In the meantime, it has to be Led Zep to play us out.