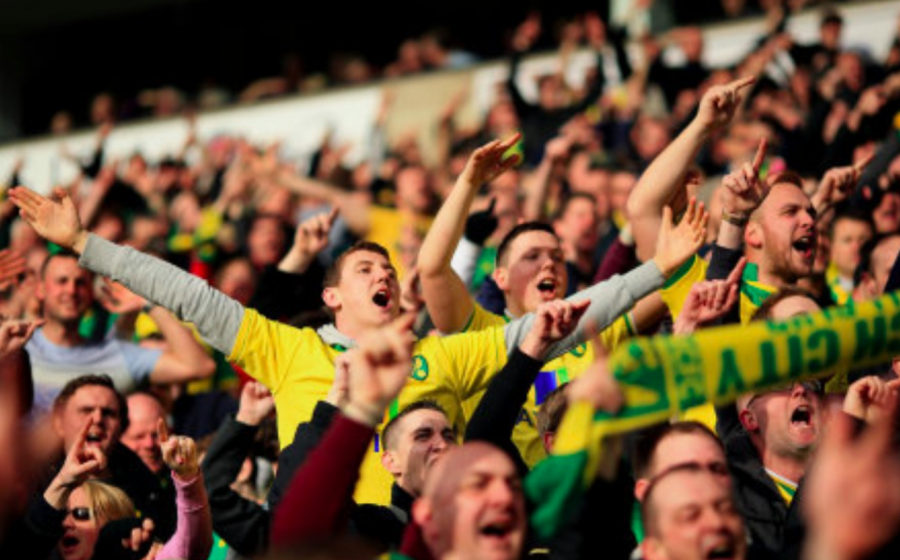 We all know it off by heart, stand up together with no premeditation involved in order to sing it about 10 seconds before kick off while the butterflies have a party flying around inside our stomachs while we do so.

It’s reputedly the oldest football-related song in the world. Chant isn’t the right word – it’s a song. I cannot remember how often I have sung it and the shyest types in the Barclay join in even if they don’t voice another word during the game. There are one or two folks like that I can assure you.

It’s a Norwich City institution and will surely be with us as long as the club exists.

For a song originally composed in the 1890s, maybe only Land of Hope and Glory might compare with it in the longevity stakes. It’s alleged to have originated from a poem penned by a Mr Albert T Smith on behalf of Caley’s FC, which was quickly adopted as the official anthem of Norwich City FC on its official foundation in 1902, with a couple of lyrical tweaks to personalise it for the new club.

Over the years purists have criticised supporters for only singing that final part, which is loosely a chorus. At one point recently our friends at Along Come Norwich [quite rightly] had a gentle go at the youngsters for singing it too quickly.

It’s been belted out in Munich’s Olympic Stadium, the San Siro, and Wembley – on at least four occasions in the case of the latter. Plus at over 90 if not 100 other English football grounds over the years and jeez knows how many times at Newmarket Road, The Nest, and Carrow Road.

The Boer War, WWI, WWII, the Cold War. They all came and went. So did the Wright Brothers, Amelia Earhart, Charles Lindbergh, Neil Armstrong & colleagues, and Concorde.

Lloyd George, Ramsay MacDonald, Winston Churchill, Harold Wilson and the current incumbent of Number Ten. This song will outlive and quite probably outshine them all.

Percy Varco heard it, Sammy Chung heard it and Big Dunc as well. So did Martin Peters, Robert Fleck and Darren Huckerby.

Max Aarons, Todd Cantwell and Emi Buendia too, as will many lads in the Academy when they break through in the future – Josh Martin, Bali Mumba and Andrew Omobamidele haven’t heard it yet but they surely will next season:

In the days to call, which we’ve left behind,
Our boyhood’s glorious game,
And our youthful vigour has declined
With its mirth and its lonesome end;
You will think of the time, the happy time,
Its memories fond recall
When in the bloom of your youthful prime
We’ve kept upon the ball

Kick it off, throw it in, have a little scrimmage,
Keep it low, a splendid rush, bravo, win or die;
On the ball, City, never mind the danger,
Steady on, now’s your chance,
Hurrah! We’ve scored a goal.

Let all tonight then drink with me
To the football game we love,
And wish it may successful be
As other games of old,
And in one grand united toast
Join player, game and song
And fondly pledge your pride and toast
Success to the City club.

Kick off, throw in, have a little scrimmage,
Keep it low, a splendid rush, bravo, win or die;
On the ball, City, never mind the danger,
Steady on, now’s your chance,
Hurrah! We’ve scored a goal.
City!
City!

Obviously I didn’t name the song because there’s no need to, is there – let’s pray we’ll all be back to sing it in person in August 🙂