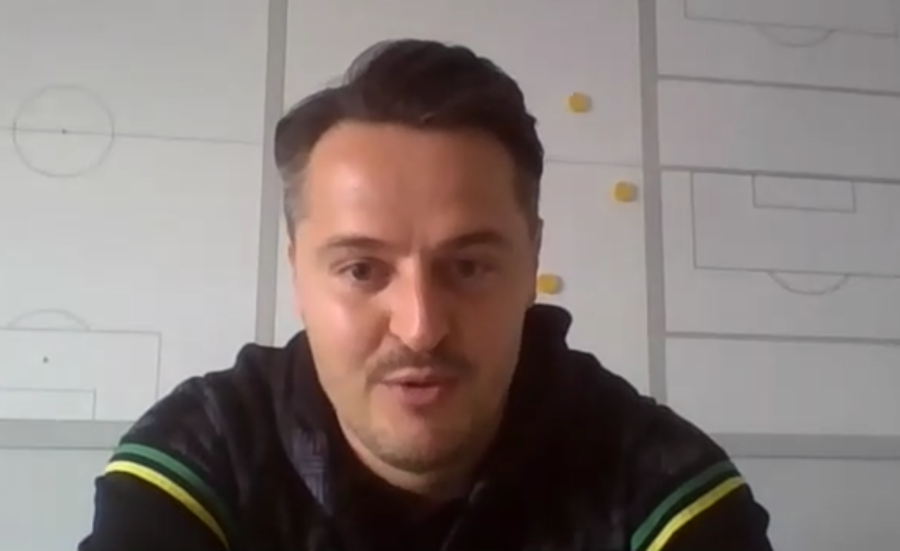 It’s a day before the final game of the 2020/21 season, and the positive atmosphere is palpable as Eddie Riemer turns a club laptop to face him. I’m on a Zoom call with the assistant head coach, who is calm, happy and relaxed in our discussion despite the rarity of his media obligations.

His demeanour is indicative of the atmosphere that surrounds him at City’s Lotus Training Centre, where the joys of promotion and success in the title race have put a smile on every face.

“They are all great lads,” says Reimer of the current dressing room. “Even last season we had a good dressing room. [In the summer] we signed some great guys, and the success helps as well, so it’s a great dressing room. Even on days off, you see many players around for lunch, or to have a chat. It’s a real family feeling.”

That family feeling is what bonds the 36-year-old to the Fine City, but there was real risk in coming to a foreign country for Riemer, a decision he took in surprisingly good faith when Daniel Farke asked him to.

“I knew that the club was in the Premier League but nothing in particular,” he said of his prior knowledge, “but then you get some background information and see the potential, and how great this club is, you have a look round the City, and it felt right from the very beginning.”

Perhaps Riemer’s faith came from his appreciation of Farke as a manager, which he made clear as we discussed what it was like working with his boss. “Everything [Farke] does, he thinks really well about it,” said Riemer.

“The first week he signed me [at then-sixth-tier German side Lippstadt, Farke’s first job, where he signed Reimer as a player before employing him as an assistant] I knew, ‘this guy knows what he wants to do, and he has a clear idea’, and also it was an open discussion; we discussed a lot what to do, the next step, how it would feel to go abroad. In the beginning, you didn’t think about it but when the offer came in and you met the people here it was straightforward.

“I wouldn’t have gone into full-time coaching without him. He was the main reason because I trust him. I buy fully into the idea of football he has, the guy he is, the character he is.

“As an assistant coach you want for your voice sometimes to be heard and considered, and that’s what happens here. It’s a joy to work with him.”

Not that it was an easy decision to move to Norwich. As the Kazakhstan-born coach revealed, there were conversations about what the switch to English football could mean: “It’s a massive step in terms of a foreign language, can you transfer your message [to the players]? It’s important for Daniel to read in between the lines, to use the language as well.”

In leaving Dortmund, Riemer and co. acted in tandem with boss Thomas Tuchel, who, via a successful spell at Paris Saint Germain, steered Chelsea to the Champions League final this week. Riemer admitted he wasn’t particularly involved with Tuchel himself, but acknowledged that lessons had been learned from the revered coach.

“I wouldn’t say it was a lot,” said the assistant of how often he came across Tuchel, “Daniel was more in touch with him, but quite often there were matchday+1 sessions where they requested several players [from Farke and Riemer’s under-23s team], and this was where I came in touch with him.

“He’s a great guy, an unbelievably professional, detailed guy, who’s involved a lot in training sessions, not just observing. Similar to Daniel, he seems to always get the best out of his teams.”

The attention to detail in his management was clearly something the current Norwich crop learned from, as evidenced by Riemer’s next answer.

Delving into the Canaries’ tactics, I asked him to specify a strategic decision the technical staff were vindicated by and proud of. I had expected either a reference to a very recent game or a very significant one. He picked out a 2-0 win at minnows Wycombe months ago.

“A really good example is the Wycombe game, away,” he said. “First half we struggled a little to create chances, and normally we’re quite fluent, really flexible, many changes of position, but you have to be flexible and adapt. Daniel changed to a back three with not that much rotation, and that was how we scored the goals in the second half.”

Riemer may well have been positive, and the effects of promotion remained prevalent in his manner, but he knows the job isn’t done. For the large majority our interview had felt like a celebratory one, until the final answer, when issued was a rallying cry:

“Everybody wants to prove that we can do it better, that we belong. To establish ourselves in the Premier League, that’s the goal.”

The full interview will be available to watch on MyFootballWriter’s official YouTube channel, Norwich Talk at 3pm on Sunday.