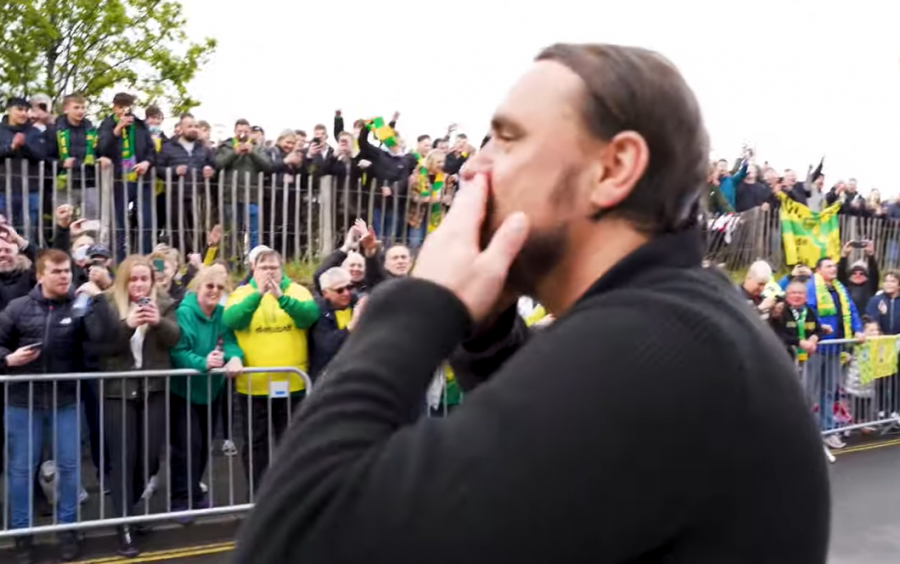 Part One, if you missed it, is here. Here is tranche two of the thoughts of the team…

Thom Belk: My moment of the season has to be Mario Vrancic’s late free-kick against Wycombe. After a stuttering start, this wrapped up a third win in a week, ahead of a tough match against Brentford. For me, that’s when I look back at when our incredible season started to gather pace; yet another piece of Mario magic and brought back extreme nostalgia of 2018/19 season. It’s just a shame it wasn’t in front of a packed Carrow Road. If this is the last we will see of Mario, then I’m glad the Bosnian gave us another bit of magic, part of an already impressive highlight reel.

Mick Dennis: Saturday March 6th. Sixty-two minutes gone. Norwich are 2-0 up at home against Luton. The cruise control has kicked in. We know they’re on their way to a seventh consecutive win. A January “blip” has been followed by a string of victories in which passages of sublime, possession-based attacks have been reinforced by periods of calculated “game management”. There have been six of these statement wins on the trot. And now we’re watching yet another win unfolding. But Daniel Farke is appalled … by a throw-in of all things. Dimitrios Giannoulis’s throw didn’t seem at all bad. But in Daniel’s eyes it was sloppy and un-productive: so much so that the City head coach ridiculed the throw by mimicking it. Farke gurned like a village idiot and mimed a slack-wristed throw-in that a Sunday morning under-12 player might make. A meme was born. But a throw-in for Norwich means we have the ball and intend to keep it. And that moment showed another Farke: the one who, on the training ground, is not always nice, polite and demure – the one who demands that his players get the minutiae right and are proprietorial about the ball.

Kathy Blake: I think this is the most in love I’ve ever been with Norwich City. As if the silky football and constantly winning games wasn’t enough, it turns out we are the ones doing things right off the pitch too, and other people are starting to notice. Among the sleaze and the back handedness going on in the upper echelons of the game right now, Norwich City stand out like a shining beacon. Amazingly, after years of being called naïve and tin pot folks, are saying the NCFC way is THE way. Who’d have thought it? My favourite thing? Well up to Saturday it was anyone one of Emi’s many control and pass moments (probably the one when he was on his backside) but now it’s Onel tipping the ice bucket over Daniel Farke’s head. That will live with me forever.

Gary Gowers: I was less confident than most that this brilliant team would be able to dust itself down and return to the Prem at the first attempt, such was the dismal end to last season, but a Saturday lunchtime kick-off against Bristol City in late October convinced me otherwise. Two Teemu Pukki goals – both of a 2018-19 vintage – had put City 2-0 up, before the Robins pulled one back, and then Ben Gibson, on the stroke of half-time, pinged one of his exquisite 50-yarders onto the toe of Emi. A perfect first touch, another to take it in his stride, a deft flick it past the Brizzle keeper, and City were 3-1 up. For good measure, Tim Krul sufficiently put the heebie-jeebies up Nakhi Wells to miss a second-half penalty and it felt, there and then, that the swagger and belief was back. (Fast forward to 3 mins 12 secs…)

Chris Sadler: Perry Como had it right when he crooned ‘Magic Moments’ (plural) rather than ‘Magic Moment’ (singular) because this season was jam-packed full of them. But, if forced at scarf-point to pick one dot in time, it would have to be seeing the players, management team, and owners celebrating with the fans outside Carrow Road after sealing the Championship title with a thumping 4-1 win over Reading. The long-overdue communing of the deliverers and the enjoyers brightened the heart. It’s been brilliant.

James Colman: Looking back at the season brings many memories. I’ve enjoyed the unparalleled access to the games through iFollow – as a Norfolk exile this has been precious to me as work makes it difficult for me to actually make a game.  Waking up in the Caribbean, turning the TV on, and finding a match on live was pretty special, but for me, the moment I’ll always remember was the Nottingham Forest game.  Away with work again, I managed to look at my phone to see a message from my son. ‘Dad, we’re murdering them!’ No time to find out more before I went back to work but the pleasure in that simple message will endure.

Stuart Gent: Two scenarios of this season for me were when we were in need our academy stepped in, firstly with Daniel Barden stepping up and not looking out of place at all behind a greatly experienced backline, with thanks to Jordan Hugill he got a hair cut too for the occasion. Secondly is Andrew Omobamidele who stepped up alongside Grant Hanley and looks like he has played several seasons of Championship football with bravery and composure to go along with his talent.

James Eddy: There have been so many beautiful moments of pure footballing excellence and skill this season. The joy offered going some way to offsetting the awful intrusions of the rest of the world that has negatively affected so many of us. And yet, what sticks in my memory is a foul throw and the wonderful reaction of a man that I, like so many other candy fans have come to love almost without reservation. So often we see Daniel Farke as a kind of affable, good-natured uncle – calm, measured and with a heart of yellow. Then Dimi Giannoulis forgets how to take a throw-in and we are shown something else: a sign of the exacting standards and determination to be the best we can be. He may be articulate, funny and honourable but he is also unwilling to accept a lowering of standards and that tells me we remain in the best possible hands going forward.

Martin Betts: In a season that presented a series of sparkling memories, it seems apt to single out one from the soon-to-be-much-missed Alex Tettey. A moment of ludicrous, carefree skill in the FA Cup clash with Coventry saw the City legend perform a breathtaking drag back and pirouette to leave a Sky Blue player wondering not just where the ball was, but whether football was actually for them. I’m not sure I ever thought Tettey had that in his locker, but it clearly illustrated just how relaxed and confident he and the rest of the team have been in their own ability this season. A moment up there alongside his stunning strike against Sunderland. Goodbye and good luck, Tetts.

Mike Taylor: For me, the season started like the last one finished. I was underwhelmed and frustrated that Farke persisted with 4-2-3-1 as I’d hoped for a new base formation. I’ve never wanted Daniel to leave, but I never expected that 4-2-3-1 would be refined to the extent that it has. Therefore I’m delighted with the egg on my face. I cannot wait to return to the Premier League now, where I’m certain we will remain. What Farle and Stuart Webber have created, to me, is only bettered by what Mike Walker did in the ’90s; no rotten apples, just a joyous group playing fantastic football, finally doing justice to the business model that Delia and Michael have yearned for. That makes me incredibly proud. We are a self-funded revolution. Enjoy the summer all, OTBC.

Will Jennings: The 2020/21 Championship season will forever be associated with – strangely – mixed memories for City fans. Another glorious title-winning campaign, Farkeball hitting its aesthetically-pleasing straps and the German’s oh-so-likeable squad capturing Canary hearts once more. But for the vast majority of us, we were never actually there to see it. The advent of the EFL’s iFollow service has been a footballing triumph of the pandemic but, as we’re all so acutely aware, it just isn’t quite the same. I was fortunate enough to be one of the lucky 2,000 for one of the home games over the festive period, and I’ll never forget watching Emi Buendia, Todd Cantwell and co rekindle that old Carrow Road magic we all hold so dearly. Cardiff at home was the fixture – a Saturday lunchtime kick-off and while there may have been only 2,000 of us socially-distancing in the South Stand, after waiting so long, it truly felt special. My brother and I had a blast. A 2-0 win, Buendia and Cantwell on the scoresheet, another step on the path to promotion – and back at our favourite Canary ‘happy place’. A strange, but equally brilliant, season indeed.

Ben Ambrose: A moment that will live with me? Simple. The player’s social media reaction to McGovern’s performance against Stoke. Premium unity on full display. This squad has created something special. Long may it reign.

Stephen Medlock 🗽 Queen for all my life 🇬🇧🇫🇷 @stephenmedlock ·
1h