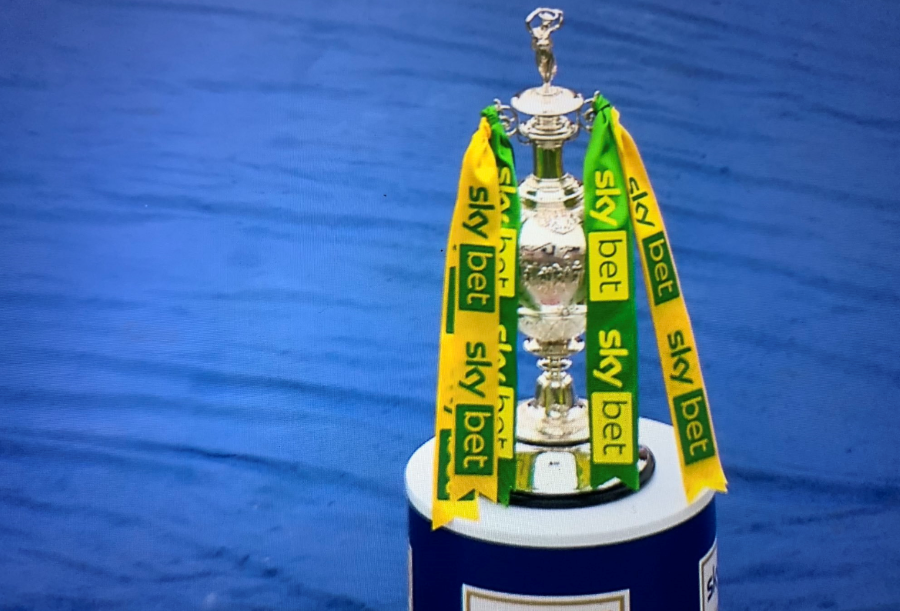 And so the curtain closes on season 2020-21; one of the most surreal, arguably the most surreal, in the club’s history. That City have been so brilliant yet so few of us have actually seen the team play live will forever stick in the craw.

Imagine the pre-match atmosphere for the Bournemouth home game with promotion in the bag even before a ball had been kicked against Jonathan Woodgate’s lovelies.

Imagine too the ol’ place rocking as those four goals went in against Reading as the title was clinched again.

Imagine a packed away end at Oakwell yesterday as the trophy was being lifted by Grant Hanley and Alex Tettey.

That all of these milestones and so many more have been witnessed through the prism of TV and iFollow is a gut-wrencher. An unavoidable one granted, but the bittersweet aftertaste will remain until we get to see our heroes in yellow and green in the flesh and are able to salute their heroics in our own way.

I hope too there will be some kind of pre-season send-off planned for Alex Tettey and Mario Vrancic as, like Timm Klose before them, to bow out in front of a handful of staff instead of a full stadium feels like one loose end too many. All three deserve better and given how meticulous this club is at dealing with such situations, there will be something.

If you’re not sure what I’m talking about, this was the scene at Colney on Friday…

It’s a tiresome phrase, but this club really does look after its own, especially if those same good people look after and respect it. The esteem with which Tettey and Vrancic are held is clear and so both were given the in-house send-off they deserved. – another example of how this club has developed this very healthy habit of doing the right things at the right time. Both on and off the pitch.

And the people within it are good people, and good people for a reason.

In the very early days of the Webberlution I was informed that Stuart’s recruitment has at its heart a ‘no d*ckhead’ policy, one that presumably extends beyond the playing staff and into all aspects of the club’s operation. And so we’re left with a group of people who are decent.

Further evidence of that was reserve keeper Ørjan Nyland – who by EFL rules, was eligible to collect his medal yesterday – giving his winners’ medal to Teemu Pukki who, as he wasn’t part of the matchday squad, wasn’t due to collect his on the day.

And, of course, it comes from the very top. I, as you know, have been critical of Delia and Michael in the past over their reticence to explore ways of making this club more competitive on the biggest stage, but no one has ever doubted their love of this club. A love that filters through the various layers and seeps from every pore on the way down.

The owners of the so-called ‘big six’ (Tottenham and Arsenal 🤣) gave us more than a glimpse of what it’s like to have owners whose only thought is for their own pockets. And so while Delia and Michael may be bottom of the wealth league table, when it comes to the owners-who-care table, they are ten points clear at the top.

Just because Sheikh Mansour, Roman Abramovich, Stan Kroenke and co tell the supporters of their clubs they care…

If they did, the daft notion of the European Real Madrid/Barca League would never have even got off the ground. But it did and they don’t.

That we do things differently round these parts will make not a scrap of difference to the Martin Samuels of this world, who will already be drafting his Norwich City obituary for May 2022, but that this club have recently had a crack at the Premier League – a painful one – should not be ignored.

It was brutal. There are still a few residual scars. And no-one wants that feeling again. From Delia and Michael down to the supporters, it was a cruel, chastening experience that’s still relatively fresh in the memory.

And we all know that doing the same thing over and over again and expecting a different result is the acknowledged definition of insanity. So the plan will be different.

Whether it will make a significant difference to City’s fortunes will only be revealed over the next 12 months but let’s not forget Daniel Farke’s prophesy of Sheffield United’s defensive strength offering them a better platform for 2019-20, than our own penchant for open attacking football. He called it right, even to the extent of the Blades’ second season in the top flight being a much tougher/impossible nut to crack.

That he now believes we don’t now need a miracle to survive that first season in the top flight should offer comfort to us all, even if he clearly is under no illusions around the size of the task.

We’ll never be fully accepted into the bosom of the Premier League. That much we do know. We do things too differently to be really considered one of them. And in a land where money is King, the poor are frowned upon.

And they shift uncomfortably at the thought of some country bumpkins coming along and spoiling their sumptuous party with their innovative ideas and fancy football.

Two seasons ago we were able to leave a few bloody noses; enough to enjoy but they were relatively few and far between. Armed with enthusiasm but also inexperience and naivety, the pocket money had to be spent penny-perfectly but wasn’t.

Now the pot will be larger, at least in Norwich City terms, but more important are those learned lessons. And where once there was inexperience and naivety, now there is nous.

The recruitment will, of course, be key and Webber and Farke have both stated that it won’t be a question of identifying specific positions for strengthening. Instead, they will keep all options open if it means making the squad better and more Premier League ready.

Ipswich fans have already earmarked us for a swift return to the second-tier by which time their dollar-laden relaunch will have created a team that’s chewed up and spat out League One and will then be ready to dismiss the Championship in a similar fashion. But we’ll see.

For now, we should just savour the moment, albeit from afar. Trophies don’t come along too often, let alone those as famous as this one.

We’re in a good place; we’re in the safe hands of good people, and we will be dishing out some bloody noses between August 2021 and May 2022.

We all have our own personal goals for next season, and for having the sheer audacity to consider themselves to be ‘super’ I’m sure we’d all love to remind Arsenal and Tottenham that actually they’re nothing of the sort.

For me, I’d love nothing more than to see us generate some steam from the ears of Sean Dyche and for those lovable scousers to be given a proper NCFC-related reason to whine.

But until then, just a huge thank you from me to all of you who have read articles on MFW over the season. Without you, we’re literally nothing.

We’re not going anywhere though; we’ll be here for the summer, reporting on the new faces, potential new faces, and maybe a little bit of England, but for now let’s just revel in being champions.