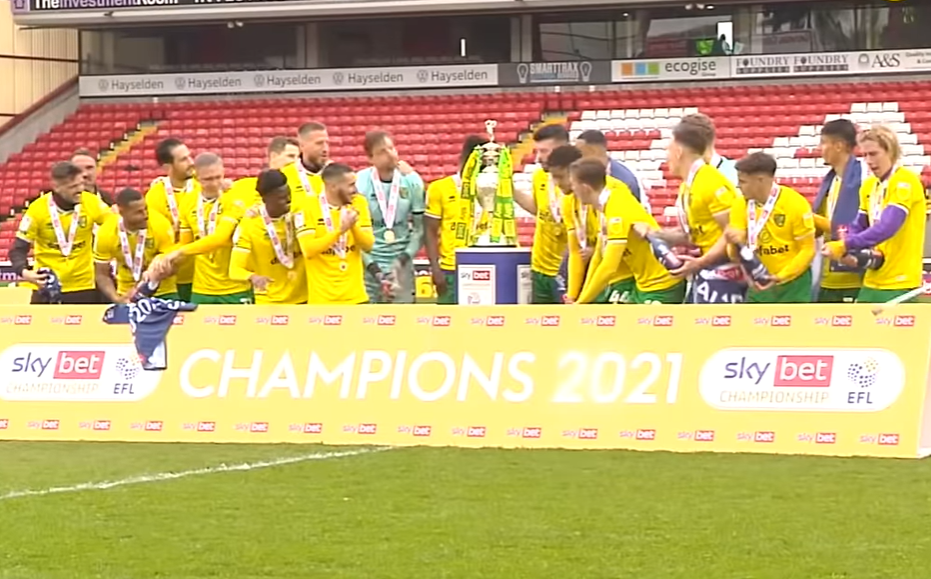 End of season games tend to have a narrative that is separated from the action on the pitch.

When the team sheet dropped, it was clear that this was going to be just such a game. When Alex Tettey first came to Carrow Road nine seasons ago, few could imagine the influence that he would have upon the club.

Likewise, the talismanic Mario Vrancic and it was fabulous to see the club pulling out all of the stops to mark the final game for these two valuable servants, in the photo tributes at the training ground and in the dressing room, and ensuring that they both had a chance to say goodbye where it matters.

On the pitch. Credit too to the Barnsley players, lining the pitchside to applaud them on. Let’s hope Chris Hughton was taking note.

On the pitch itself, it was a contrast in styles. Obdurate Barnsley, looking to move the ball forward quickly, pressing the Norwich defence and a high line, versus ever-patient City.

The game wasn’t really going anywhere. City were finding it hard to get the ball out, perhaps guilty of moving the ball too slowly across the back line and into midfield, but always harried and hassled by the Barnsley front three.

On 24 minutes, Barnsely took the lead.

A long ball forward led to a tussle between Carlton Morris and Andrew Omobamidele. The former Canary clearly had a handful of the young defender’s shirt before reaching over his shoulder and pulling him back, all seemingly unseen by the referee. His cross was met by Woodrow, who had shaken the attentions of Tettey to slot home.

Good work by the ever industrious Kenny Mclean found Max Aarons in space on the right.  His cross found Emi Buendia unmarked for the equalizer. Not with his left foot. Not even with his right foot, but with his head!

Barnsley then had a sustained period of pressure, preventing City from moving the ball around,  and were rewarded in the 42nd minute.  A quick throw, cross into the box and a free head for Chaplin.

The second half brought expectations of City moving up a gear against a tiring Barnsley.  A small tactical switch had Alex Tettey drop deeper between Grant Hanley and Omobamidele to offer a further option when the Barnsley front three were pressing.

City moved forward in a sweeping move, a clever flick from Buendia played Mclean through in the area but he was felled by a crunching tackle, ending his game. Hopefully the knee brace and crutches seen after the game were a precaution and he will be available for Scotland this summer.

Adam Idah came on in his place, Todd Cantwell moving central, and Vrancic dropping deep. Moments later, Aarons played the ball round Styles, running the other side of him and playing Buendia through.  The little wizard pulled the ball back to the central Cantwell who in turn, spotted Idah unmarked, who smashed home with his first touch.

Barnsley responded by replacing the entire front three, bringing extra energy and impetus into their attack, but in reality, they never sustained much threat.

Of the departees, Vrancic was taking centre stage – much happier in a deeper role it seems.  His delicious free kick was met bravely by the head of Jordan Hugill, who took a boot to the face for his efforts, ending his afternoon.

On 82 minutes, it was like rolling back the years. A simple ball from Tettey, to Vrancic who found Kieran Dowell with a trademark long pass. Dowell played Buendia in but his shot from the edge of the area was wide.

And so the curtain came down. 85 minutes. A visible emotional Alex Tettey left the pitch to all round applause, replaced by his heir apparent, Jacob Sorensen.

And that was it for the game. Leaving only the farcical sight of the City players, walking to a table to collect their own medals.  Even then, the man of the day, player of the month, Alex Tettey did it with a smile, bounding up to collect his prize, before jointly lifting the trophy with Grant Hanley, once again clearly emotional.

Behind the laptop and computer screens, all over Norfolk and around the world, you can be sure that our favourite Norwegian wasn’t the only one shedding a quiet tear.