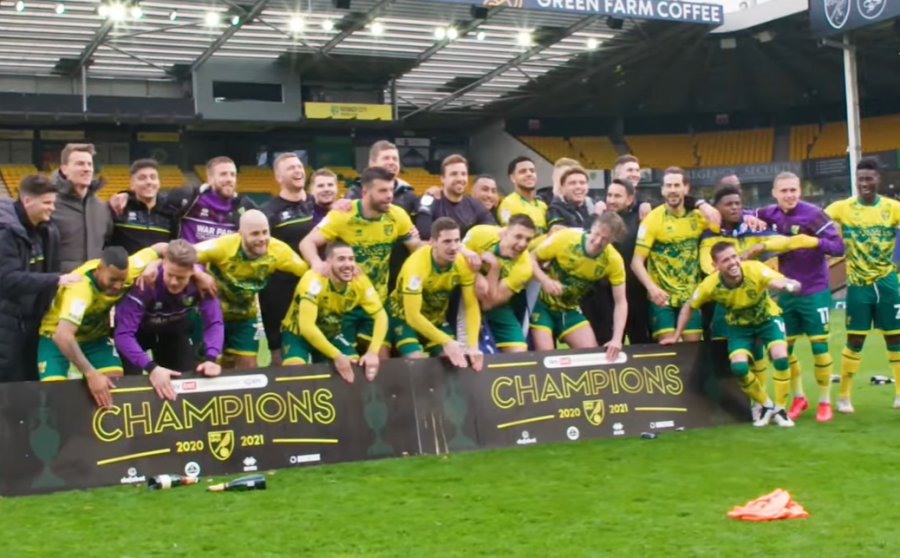 It’s guest blog time and the floor is once again Debbie Hewitt’s, who follows up last summer’s debut blog with her own take on the wonderful season that was 2020-21…

Last summer I was so pleased to get my ‘Alternative view of the season’ published here on MyFootballWriter. This gave me a much-needed boost during difficult times, so, sorry folks, I have decided to give it another go.

This year, we have all been in the same boat (HMSPTL?), so my view is not so much an alternative, as, well, simply my view, because we have all really been forced to be armchair fans this season.  While I feel the need to say again that I am a woman of a more mature age, and the first to admit that I am no footballing expert, I hope you understand that this does not diminish the passion I feel for our amazing football club.

Yet again this season, I have relied upon BBC Radio Norfolk’s excellent coverage, with games on Sky having the sound turned down. Don Goodman gets on my nerves, but probably not as much as #ncfc have got on his, because, although he has obviously never rated us, we have been brilliant.

This season has been the epitome of a dynamic Championship campaign; better, I believe, than 2018-19, because we seem to have sorted that leaky old defence out.

Okay, not so much excitement – we averaged just over two goals a game then, and were the masters of the nail-biting, late, late show – but clean sheets were a rarity, and there have been so many more dominant performances this time around, when even the odd one goal lead never seemed to mean the traditional squeaky bottom time, so confident have we been of our boys’ abilities.

I obviously have my worries about the forthcoming transfer window. It seems inconceivable that we will hold on to some of our stars.  Literally our ‘star man, playing down the right’, Max has earned his right to a top move, both with his performances for three solid years, together with his loyalty and refusal to let interest from Barcelona turn his head.

Maybe the forgotten man, Sam Byram, whose Norwich career has been blighted by injury, will stay fit and finally get his chance should Max depart. He has certainly shown enough in the past to make him a contender.

Emi will also surely attract some high-level interest. Will a guaranteed Premier League start each week be enough to convince him to stay? His value makes him an enormous club asset, so we have to assume the right offer will mean a move – that’s how it works.

Finally it is confirmed, the classy Super Mario Vrancic, fondly known by me as ‘The Beautiful Man’, has been a mere bit-part player this season and his late appearance against Reading was his Carrow Road swansong. We will never forget his contributions since he and his original blonde haircut arrived in June 2017, which is also when my eyebrow envy began.

Mario soon became part of City folklore with his always spectacular goals, never forgetting that late free-kick, after he bought the foul in the 97th minute, to earn a valuable point against Sheffield Wednesday during the last Championship campaign..

Likewise, we also bid farewell to our loyal servant and cult hero Alex Tettey, after nine years, during which time he has rightly reached club legend status; always available, and always with a smile on his face, and hopefully to be welcomed back to the club in the future, possibly in a coaching role. I really hope so. A deserving recipient of the April player of the month award and surely a Hall of Fame contender.

Goodbye too to Oliver Skipp and Xavi Quintilla who go back to their parent clubs.  We are all very sad to see them go. Who knew Xavi had a Mario-esque free kick in him? Surely a full Premier League season with us is just what Ollie needs to help his development? We can but dream. Stuart Webber has intimated that this might be a possibility if talks work out.

A massive welcome officially to Ben Gibson and Dimitris Giannoulis, who finally signed permanently.. and both of whom have bought into the ethos of the club and slotted straight into Farke-ball; so much so that it seems like they have always been here. I look forward to a fully fit Gibson playing in the Premier League where he belongs. His experience at Burnley is just unfathomable.

A special mention for the ever reliable Tim Krul, who in my opinion who should have been in the Championship team of the season; the ever dependable and with a surprising amount of speed going forward, Captain Fantastic Granite Hanley (see what I did there?), and a quick highlight for Jacob Sorensen, who, with a few minutes’ notice, was literally dropped in at left back, and then didn’t put a foot wrong.

I can’t hope to include everyone, although the whole damn lot of them, including the squad players who didn’t figure much, together with the backroom personnel from the top to the bottom, deserve all the plaudits and so much more.  Champions of the Championship and an immediate return to the Premier League; you can ask no more, and they all played their part.

Here I can refer to the end of my blog from last year, my confidence in the Webber/Farke partnership was entirely justified and I was right to be hopeful for this Championship season. I cannot even begin to contemplate a time when one or both of them are no longer here.

I am again hopeful for the new season to come. We seem better prepared, somehow better equipped and hopefully, with a new recruitment philosophy, and no room for sentimentality, I feel sure that this time we can hang onto our Premier League status.

Nobody can argue that the lows of relegation are tempered by the excitement of promotion, but boing, boing Canaries could do with an extended stay in the Premier League for once!

Of course it also means we will be back, albeit probably last, on Match of the Day, with its suspect punditry, and we welcome (*cough*) back VAR!