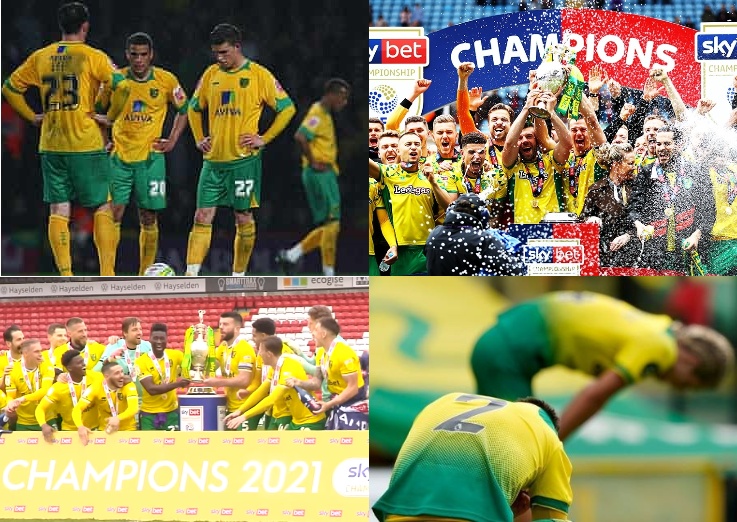 The end of a footy season is a time ripe for creating memories. There’s the brilliant sort: “CHAAAAANCE! It’s going to go in, it’s going to go in!”. And there’s the rubbish sort: watching Norwich get dismantled by Fulham as Nigel Worthington’s wonderful Championship winning team slithered apologetically out of the Premier League with barely a whimper.

So when I had a rare chance to get to Carrow Road for the final home game of the 2008/09 season, I was pretty sure I knew what flavour I was in for. It’s fair to say the evening delivered. In grim spadefuls.

Things got off to a suitably awkward start as an injured Lee Croft, doubtless cursing the invention of crutches, levered himself onto the pitch to receive the Barry Butler Memorial Trophy. I can’t think of another year when the hallowed cup was more obviously awarded not to the best player so much as the least awful. No slight on Croft, who did his best, but that really was a rotten season.

Bryan Gunn, club saint that he is, had stepped in to try and bring some cohesion and relief in the aftermath of the ill-judged regime of the late Glenn Roeder. It was a brave, but always doomed, attempt. By the time he took over, the club was subject to the sort of gravitational forces normally only seen on Jupiter, with the weight of what seemed like an entire team of uninspiring loan signings dragging City towards the lower leagues.

It was no great surprise then that the match, against the perpetually irritating Reading, served up a limp defeat. A disjointed Norwich side huffed and puffed yet somehow managed to concede not one but two headers from Shane Long. Relegation to the third tier, while not confirmed by this game, became almost inevitable.

But then something rather remarkable happened.

Over 25,000 people had turned out for the game. And despite it being a masterclass of half-arsery, the fans carried on singing. There was warm applause as the team sheepishly completed a post-match circuit of the pitch (performances like this ushered in the weasly phrase ‘lap of appreciation’).

I hung around until after the most tenacious players had seeped from view, wandering down to the front of the Barclay as it emptied. I wanted to bathe in the Carrow Road atmosphere, no matter how fetid it was at the time. And it was also an expression of defiance – the season’s gone, the Championship status has gone, but I’m still here and I’ll still show my support for the club.

Maybe it was just wishful thinking or being caught up in the bleak poetry of the moment but I was gripped by a cast-iron sense that this wasn’t curtains for the Canaries. There was just no way this club and these fans would be marooned in football’s backwaters.

It was by no means a statement of the obvious. The football pyramid is no respecter of past achievements. Just look at that lot down the road. And to them add Sunderland, Portsmouth, Bolton and others who’ve gone from glory to scratching a living on the margins at frightening speed. City could have struggled to rebuild and been forced to adjust to greatly diminished circumstances. We could, we really could, have become a lower-league club.

What’s followed has been a dozen years as arguably the most boredom-averse side in English football.

Five promotions, three relegations, a treasure trove of memories and a wonderful cast of characters. The surge under David McNally and a career-peaking Paul Lambert; the Webberlution and Farkeball; the slightly scratchy bit in between including the bright, if brief, Alex Neil experiment. Slipping back into League One has never really been on the cards as we’ve become established among what some like to call the ‘Top 26’.

Of course, we get caricatured as a ‘yo-yo club’. Like it’s a bad thing.

Most supporters would give anything to have in a decade what we’ve had in the past three years. No Birmingham fans are saying: “Thank god it’s not like the noughties, with all that tiresome yo-yo stuff”. Because we want excitement. It’s why we follow the team. Well, that and the crippling sense of loyalty.

We want the promotion runs, even if the prize of the VAR-blighted, crazily scheduled, wildly unequal EPL is a poisoned chalice. We long for those games in March and April where every late goal or snippet of news from another ground gets celebrated like a World Cup win.

We want the memories.

This season we’ve had so many, even if they’ve been mediated through iFollow or the magical Chris Goreham. Who knows what next season will bring? Frankly, it could be just about anything. But who cares? We’re the champions. As far as we’re concerned, we really are the greatest team the world has ever seen. The players are heroes. And our fellow fans? Well they’re just the most committed, most passionate, most ridiculous bunch of hope junkies we know.

We’ve loved this club at its worst and now we’re getting to love it at its best.