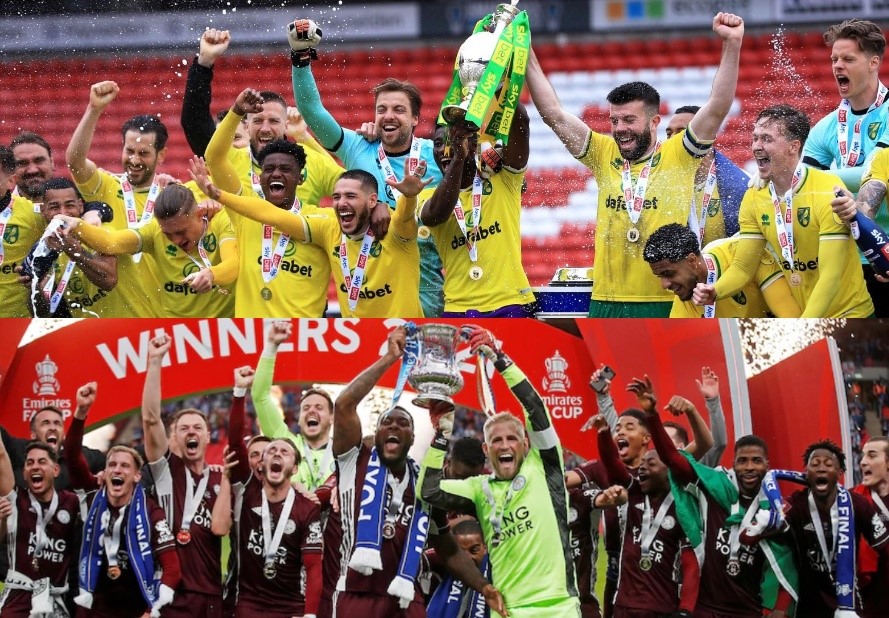 It goes without saying that Chelsea fans will obviously have the hump this morning – VAR et al – but name me another set of fans who will not have been overjoyed to watch Leicester lift the FA Cup yesterday.

Supporters of the five other European Super League wannabees will merely mock the Blues for losing out on a trophy to add to their collection but the rest of football will see it for what it really was: a bloody nose for oligarch-funded Galacticos of the West End, who now see winning trophies as their God-given right.

If it had been Thomas Tuchel’s men lifting that trophy at 7:15 last night they’d have still had the pyro and confetti, and would still have celebrated with a round or two of “campiones, campiones…” but in no way would it have been the same as watching the sheer joy on the faces of the Leicester players and staff as Kasper Schmeichel and Wes Morgan lifted the trophy.

Neither, come to that, would a Chelsea celebration had the heart and soul of our City’s recent efforts as they first of all celebrated promotion and then the lifting of the Championship trophy.

To be honest, it’s hard to blame Chelsea fans for getting blasé over the winning of silverware. Such has been the level of funding since the arrival of Roman Abramovich, it would have been little short of a disaster if, over the last 18 years, they hadn’t have been regularly winning things. It was just a little inconvenient for them that Sheikh Mansour and a few other multi-billionaire megalomaniacs decided they too wanted a slice of the action.

So I think we could all be forgiven a few Chambo-style fist pumps when watching Leicester topple one of the “Big Six” on the biggest stage. It was in itself a thing of beauty, but for it to be further enhanced by the sound of 22,000 voices made it really quite special.

It offered hope and, to a degree, some comfort. A comforting notion that you don’t have to be a supporter of a Premier League Galactico to stand a chance of seeing your team lift one of the major trophies of English football. It remains a slim chance but that chance is still there.

Leicester, let’s not forget, have a benefactor of their own without whom they wouldn’t have won the Premier League title in 2015-16, but it’s obvious to all that the late Vichai Srivaddhanaprabha and his son Aiyawatt are of a different ilk to the Joel Glazers, the John W Henrys and the Stan Kroenkes of this world.

While their love of Leicester City could never as deep-rooted as Delia and Michael’s love of our club, it’s clear that Aiyawatt and his late father developed an attachment to the Foxes that we can identify with. Decisions are taken based on what’s best for Leicester City the football club and they remain a community club that tries to do things the right way. And they appear decent people – another thing we can identify with.

So it felt okay to be happy for Leicester because it felt like they were doing it for the little guy, and by the little guy I mean not one of the ESL wannabees.

Prior to the Foxes Wembley triumph, they warmed up in the best possible with a win at Old Trafford – another reason to love them. But it was a post-match comment from Brendan Rodgers that struck a chord as he described a spell in the game when it looked as if United were gaining the initiative.

I’ve been unable to locate the exact quote, but Rodgers described how in said spell, his team’s passing out from the back was too slow and laboured and gave United the time and incentive to initiate a high press and win the the ball back in Leicester territory.

It struck a chord because that’s one of the changes for City that needs to be enacted next season if 2021-22 is to differ from 2019-20. While it is clearly a very good and important thing that Daniel Farke never ever deviates any way from his core principles, the ferocity of the high press from those teams who deploy it in the Premier League is at an altogether different level to those who try it in the Championship.

So, while it’s glorious to watch Messrs Hanley, Gibson and Omobamidele to and fro the ball between themselves, Tim Krul and the full-backs, for it to be Premier League ready it needs to be zipped rather than rolled, but always with precision. Or, to put it another way, more Man City (h) than Burnley (a).

Not that Farke and Webber need telling.

To continue the Leicester theme for just a little longer, another widely acknowledged improvement needed in City’s squad over the summer is to bring in some physicality and dynamism. In 2019-20 we were just a little too easy to play against and almost every team had the ability, if it was required, to bully us.

The passing rhythms remained as pleasing as ever but, especially during Project Restart, were disrupted just a little too easily. That needs to change, as already identified by Webber and Farke, and so it was interesting to watch yesterday as Leicester remained as combative as ever in that area of the pitch despite basically deploying just a two in there – Ndidi and Tielemans.

That both were able to more than match Chelsea in the physical battle despite, at times, being outnumbered said a lot about their ability to do the dirty stuff without the ball.

The key, of course, is to unearth a ‘unit’, or two, who can not only win the physical battle but also adapt to the requirements of Farkeball; not an easy circle to square.

And finally, I’ve already touched upon those 22,000 voices inside Wembley yesterday immeasurably enhancing the sense of occasion, but there was a wonderful moment, in the first half, which acted as the most perfect reminder of how much football has been diluted without fans inside the grounds.

You probably know what I’m going to say.

The clock had ticked onto 26 minutes 45 seconds when Timo Werner – Chelsea’s £47.5 million (!) signing from RB Leipzig – lined up a shot from 25-yards, but instead of hitting the back of Schmeichel’s, he hit row Z of the Leicester fans behind the goal.

The perfectly synchronised howl of derision from 6,500 East Midland voices was just beautiful. Music to the ears.

And in three months time it will be our turn.

How wonderful will that be.

Ruddy back as number 2 to Angus next season please 👍🏼 #NCFC

Good luck to supporters of @FCHTOnline & @ChesterfieldFC in their National League play-off quarter final match. Also congratulations to @officialgtfc for their victory over @Official_NCFC last night.

Rob De - we do recover@RobertDeFreita7·
7m

There ARE of course decent Notts C fans, but I've lost a lot of respect for that club this season
They spent a year trying to drum up a fake rivalry.
Looked on as the media demonised us.
Needlessly limited allocation.
Spent a week on the wind up.

@nataliedawn_x @BonoITFC @bish25 You might as well Chuck in the all time League table since football was invented if you like to see where you are. Oh look after 10 years of so called success you are still behind us #itfc #ncfc

Sitting at less than a 5% response rate. Come on, folks... Voice your opinion! #NCFC