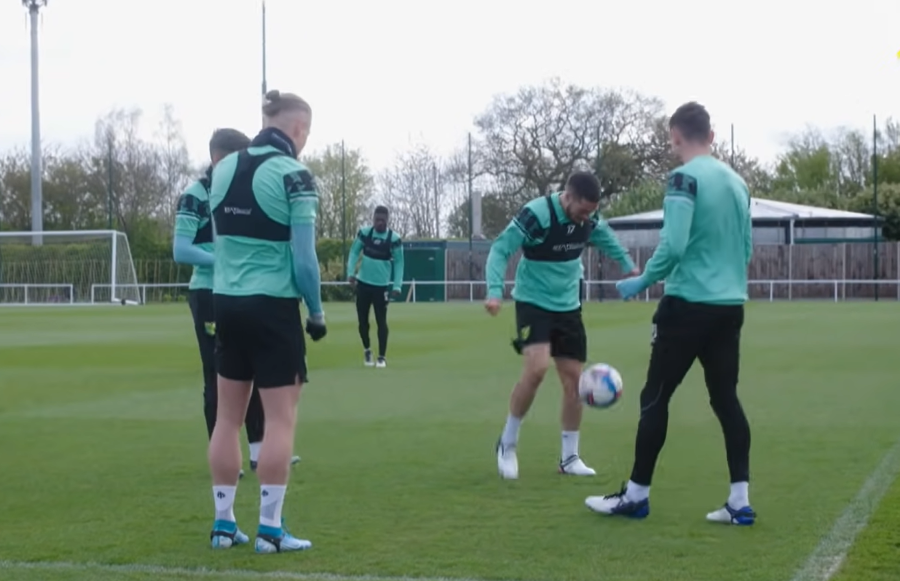 While Carrow Road is seen as the home of Norwich City Football Club, the centre of yellow and green activity, the reality is that this hub is actually City’s Lotus Training Centre in Colney, where players report for duty nearly every day, their number of total appearances there dwarfing that of those in NR1, workplace on a bi-weekly basis for first team Canaries.

What’s so bizarre about this fact is that the large majority of Norwich fans have never even visited Colney, and the happenings there remain secret. So what actually does happen there? Here’s the story of what a Norwich City training session looks like in 2021.

Long. That’s the most simple and consistent characteristic of Daniel Farke training, his double sessions notoriously difficult for the older members of his 2017 squad to adjust to. In this way Farke has brought an aspect of German football to England, with training programmes generally far more rigorous in Bundesliga land than in Anglia.

The length and intensity of the session doesn’t necessarily mean less fun, however, and the ball is always an important part of a session. After Head of Performance Chris Domogalla is finished with a warm up comprised of short sprints and various stretches, the players are straight into rondos.

It’s during the warm-up that Farke normally drifts into the session, greeting each player with a pat on the back and a hello as they stand in a circle doing static stretches. Despite the German’s absence for the opening part of the session, he is often involved in training on the whole, as assistant head coach Eddie Riemer told MyFootballWriter.

Riemer also told of how long is spent preparing for opposition in these sessions, with “70-80%” of time dedicated to improvement of the team’s own tactical principles. One tends towards the belief that that number drifts towards the lower end of that scale as Farke’s side prepare for a Premier League game.

The aforementioned rondos (or piggy in the middle) are a key part of the transfer of Farke’s principles to his players. The sessions usually involve groups of five (with four players in a square passing around one in the middle), before coming together for 8v2s or 9v2s.

Even City’s goalkeepers take part in these rondos occasionally, highlighting the importance in the German’s mind for universality in his squad, as well as the crucial ability of his stoppers to play out.

The more tactical aspects of the sessions are understandably kept hidden, but a common drill helps explain Farke’s objectives. While many managers spend 20-30 minutes in practice 11v11s in training, City’s head coach tends more towards small sided games, keeping full sized goals but going between 6 and 8-a-side in a condensed area.

This is designed to improve the ability of his charges to play in the small spaces inevitable when a team plays the way the Canaries do, with low opposition blocks common. City may not spend long actually camped 12 yards from the opposition goal, but scoring in these training matches becomes a similar task to getting in behind a staunch defence.

Unsurprisingly, Farke has some unique methods of his own. Footballs are a key component, but in many situations, they’re tiny, nutmeg-optimal footballs that sometimes aren’t even kicked. Handball-style possession games are used to improve movement, while absurd relay races with seemingly irrelevant conditions are used as team-building exercises.

Training sessions can also be extra-pitch, pre-season especially good at throwing these curveballs. Emi Buendia was the winner of a go-karting session last summer, while team bike rides have also occurred, perhaps explaining why City’s players have become so in tandem with one another.

As far as who’s involved, recent injury crises and Farke’s trust in youth players mean that the group can be varied greatly even week to week.

Alternative training kit sponsorship (Lotus instead of Dafabet) does separate youth players from their more experienced colleagues – a reminder that the work isn’t finished as soon as the step up to senior team training is made – but it’s not uncommon to see youngsters in the fold. This was the case with impressive young Irishman Andrew Omobamidele, who stepped up to first-team training long before he made his first senior start.

When pitch work is finished, analysis – an area Omobamidele and Todd Cantwell have both highlighted as important – and gym work (a new gymnasium has often been talked about as one of Stuart Webber’s greatest training ground improvements) are important areas.

When the squad, along undoubtedly with some new faces, return this summer, they can expect more time on the ball, as Farke opposes the traditional fitness-first approach to pre-season.

Of course, conditioning will be a focus for a group of players fresh from a well-earned break, but these sessions will also incorporate the technical and tactical requirements the boss demands. This preference was observed by the 2017 crop, rocked by the introduction of regular double-sessions but pleasantly surprised by the amount of ball work present in Farke’s first summer programme.

Club performance staff have, however, identified recovery and injury prevention as key areas to improve in 2021/22 after injury crises in consecutive seasons, meaning training programmes, especially mid-season, are likely to be a small amount lighter next term.

Also, topical going into next season, construction is already underway on the £750,000 SoccerBot360, a new training technology that uses animated pictures to simulate in-game decision-making, a gamble which Stuart Webber feels could pay off for City in a big way. As described by Michael Wynn-Jones, “it reproduces games or situations and measures how quick and agile you are as a player.”

Webber will continue to find innovative ways to eke out those marginal gains, while Mr. Farke will continue to push his team to improve. Prospects of staying in the Premier League are certainly greater than they were in 2019, but every drop will still need to be squeezed out of the Colney fruit if it is to be achieved.