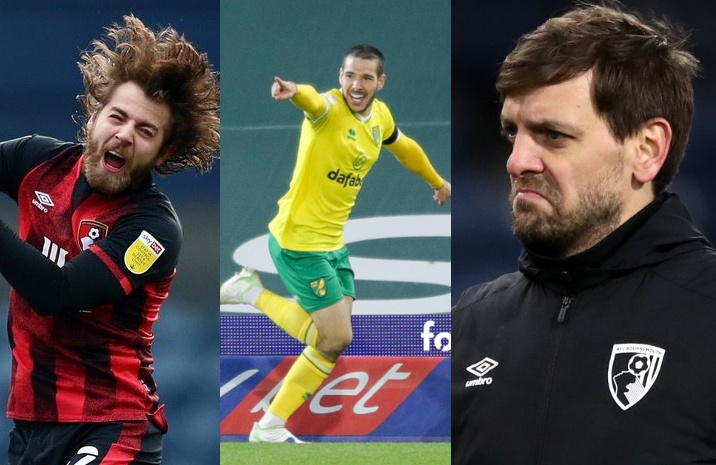 “The Play-Offs are gloriously British. If your team isn’t involved it’s all about choosing which team you hate more and screaming for them to lose. Lots of opportunities for visceral catharsis.”

The words of a wise man.

Nope. Instead, from the keyboard of our own Andy Head – him of the ‘Headteacher’s’ reports – and delivered with perfect timing on Twitter as the Cherries of Bournemouth licked their wounds after their brutal defeat by Brentford in yesterday’s playoff semifinal.

That the Bees had to overcome a one-goal deficit from the first leg and then the concession of an early goal yesterday made it all the more painful for fans of Bournemouth and all the sweeter for just about everyone else.

Well, I say everyone. I’m probably mainly talking about City supporters who were united in their very temporary support of Brentford – the same Brentford who we’ll probably rally against next Saturday when they take on Swansea for a place in the Premier League.

Because Andy is right. There really is nothing like the playoffs to stoke the fire, and that goes way beyond the players and fans of the teams involved. And after Bournemouth’s fairly unedifying Carrow Road performance on the night our promotion was confirmed, it was fairly obvious which side of the fence we were all going to land when Bees and Cherries collided – regardless of the faux beef we have with a couple of our west London brethren.

The schadenfreude came thick and fast as the Sky cameras broke away from Brentford celebrations to capture the desolation and heartache etched on the faces of, among others, Ben Pearson, Jonathan Woodgate and Asmir Begovic.

Given Pearson’s rambunctious approach to controlling those central areas of the pitch and his penchant for hitting the deck and wailing like a banshee when suffering the merest of touches from opponents, it’s fair to assume City fans weren’t alone in not feeling sorry for the hirsute one, but given his Carrow Road histrionics on the night in question, if he was looking to Norfolk for a consoling arm in the Brentford aftermath, he was urinating in the wind.

I’m also not expecting Pearson to have been in receipt of a ‘hard luck, you’ll come back stronger’ text from Dimitri Giannoulis. While his Carrow Road tears may have been of the crocodile variety, those on display in west London were real.

So forgive me the churlishness of harking back to his pre-match interview at Carrow Road, when he offered his congratulations to City on their promotion through gritted teeth before making the point that City’s success was achieved by virtue of keeping together a Premier League squad, compared to the poor Cherries who had had to undertake a squad overhaul.

So, please forgive us, Jonathan, for neither buying this sob story nor for feeling not the slightest grain of sympathy at the prospect of the Vitality hosting Championship football again next season. I was going to say ‘echoing to the sound of Championship football’, but while others have managed – with their vastly reduced numbers – to create a cauldron of noise, the good folk of Bournemouth created, in the first leg of the playoff semi, all the menace of a summer fete.

The is the same AFC Bournemouth who, apparently, thought they could lure Daniel Farke from us last summer and a director of whom, in the Vitality boardroom after City’s 0-0 draw there last season, offered a condescending “you must be really chuffed with getting a point here” to a member of the City board.

But talking of clubs and fans who have an inflated sense of importance, it’s been quite the week of Emi Buendia rumours – something we, of course, have to get used to over the next few months.

That we have on our hands at least two other very saleable assets, is going to make it the close season excruciating, and I mean *really* excruciating. Already Arsenal and Villa fans have seized on the slightest sliver of the faintest rumour and are both now salivating at the prospect of Emi adorning their colours next season.

Fans of both have proclaimed the deal all but done while reminding us in, no uncertain terms, of Little Norwich’s place in the footballing food chain; both citing ‘he’ll soon be an *insert name of club here* player and there’s nothing you can do about it.

Well, good folk, I’d suggest that’s where you’re wrong. We can do something about it. We can say no.

Stuart Webber has made crystal clear that any deals will be done to the benefit of the player and Norwich City Football Club, and so it will take more than Arsenal fans just willing it to happen and for a few fake ‘in the know’ Twitter accounts to say it’s happening for it to actually do so.

For what it’s worth, I do believe we may have seen the last of Emi in a yellow shirt and am less convinced than others that his inclusion in the Argentina squad for some upcoming friendlies will enhance his desire to say with us. International training camps are fertile ground for rumour, conjecture and discussions around who’s earning what, so let’s not kid ourselves that Emi’s relationship with Norwich City is anything more than employee-employer.

I hope I’m wrong. I usually am.

But, equally, such is Webber’s record in filling gaps that appear in the squad, even if the worst does happen then I’m confident there will some incomings to enhance the collective, creative spark.

Any signings will, I suspect, remain of the modest variety in terms of £s and the post-playoff chatter around City making a move for Danjuma looks highly ambitious and unlikely from where I’m standing. And besides, getting too carried away with unsubstantiated rumours turns us into Arsenal and Villa fans, doesn’t it? 😀

I say we sit tight, let Stuart weave his summer magic, and gear ourselves up for some full-on Thomas Frank and Ivan Toney baiting next Saturday.