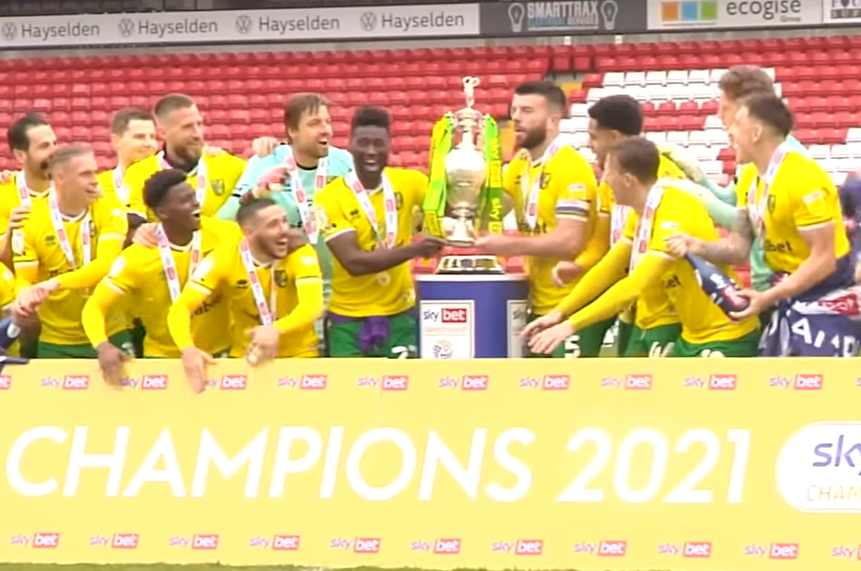 It’s been a season of pure paradox. Sheer brilliance on the pitch, yet off it possibly one of the hardest many have ever had to navigate. Our champions creating the magic, the storylines and everything that goes with a title-winning run, but all to an empty Carrow Road.

We’ve been united as a fanbase by our absence, an unwanted unity that would have seemed unthinkable if we were to rewind back to that glorious night in 2019 as City did the business against Blackburn to a rocking Carrow Road.

Man City at home – the stand-out performance of an ill-fated season – could also have been heard from all corners of Norfolk. Spinal Tap might have amps to 11 but the Norwich faithful turned it up to 12 that night to roar the boys home.

But it’s been hard.

Being a football supporter can transcend beyond what many on the outside understand it to be; it’s our identity, it’s a part of what makes us who we are. The passion, the pride, the hopes and fears. And then when you find yourself without all of that it can dawn on you just how much of a part of you it was.

I mean sure it meant everything to you… but now it really means everything!

I found myself in an unusual situation at the start of this season; a personal life decision that would see me do the opposite of what most Norwich fans were trying to do. I was going to take myself even further away from our fine city as I found myself having to move abroad, more specifically to Madrid. A serious footballing city indeed, but now to be thrust into an environment where humming ‘Don’t you want me baby’ isn’t auto-filled with ‘Teemu Pukki baby’ by a cheerful stranger.

Yet it’s a funny thing football. Absence might make the heart grow fonder, but you can also find that football is an anchor; a way of keeping that part of you that’s forever yellow and green and keeping you always connected to the city.

It’s been true for most of you out there as you’ve had to get used to not having a normal match day each weekend, and it’s been true for me too, as this Norfolk boy has muddled his way through eight months in a new country.

And what an anchor it’s been!

Despite the frantic pace of the Championship calendar making many a manager sweat, the Saturday-Tuesday-Saturday routine became a fixture for me in a way that felt almost as important as food.

When you aren’t in Norwich, Norwich seems to almost double in importance; my pride in the city I’m from and the team I support seems to supersede that of the country I was born in.

I’ve found my consumption of all things Norwich City has gone through the roof; articles have been read, podcasts listened to, messageboards and social media accounts contributed to.

iFollow, with its unreliability and interesting choice of camera shots, had become the pantomime villain to shout out in absence of opposition fans. This new way of supporting had given me energy and comfort – a lifeline to back home.

What a season it’s been too, almost as if the players got together and decided they needed to do something to give us a lift after the last 12 months. The resilience shown by the squad to dust themselves off after the trauma of relegation and a painful Project Restart period was nothing short of sensational.

We didn’t have it all our own way though. It was a stuttering start with some performances that seemed to suggest a squad that was still finding its rhythm again. Rotherham away was the day it felt like that resilience was finally on show again.

1-0 down and a penalty conceded, the season looked like it was already at a vital crossroads. Cometh the hour cometh the man. Tim Krul did exactly what we all know he can when put to the 12-yard test. Fast forward to the final whistle and we had three points in the bag and a gritty comeback performance. We were back.

And when did I truly start to believe we were heading for the “Promised Land”?

Well, for me it was the cup-final-like day of Brentford at home; the side that we had heard described as the premier attacking force in the league, the champions in waiting.

There was a yellow and green corner of Madrid that anxiously went through his new prematch routines; the podcast on the train home, the prematch read-through of any and every article giving me any clue of the outcome, and proudly putting on my shirt and scarf ready to sit in my small flat glued to the laptop screen.

My word, what a performance. As Emi dispatched his low shot from the edge of the area I could feel the last cloud of doubt leave my mind. My Spanish neighbours must have been racking their brains trying to figure out which important La Liga fixture they had missed as I jumped to my feet to cheer the final whistle and performance that oozed maturity and class.

The stand-out side in the league had just put everyone on notice.

By the end of the season I found myself looking back with pride at not only one of the most complete performances of our club in a Championship season, but also with a huge sense of gratitude.

For someone in a brand new city, country and job, the routine and the connection to back home was a lifeline. It made the hard days easier, and the uncomfortable comfortable.

You can end up almost anywhere in life, but one thing that will stick with is your city. Our city.