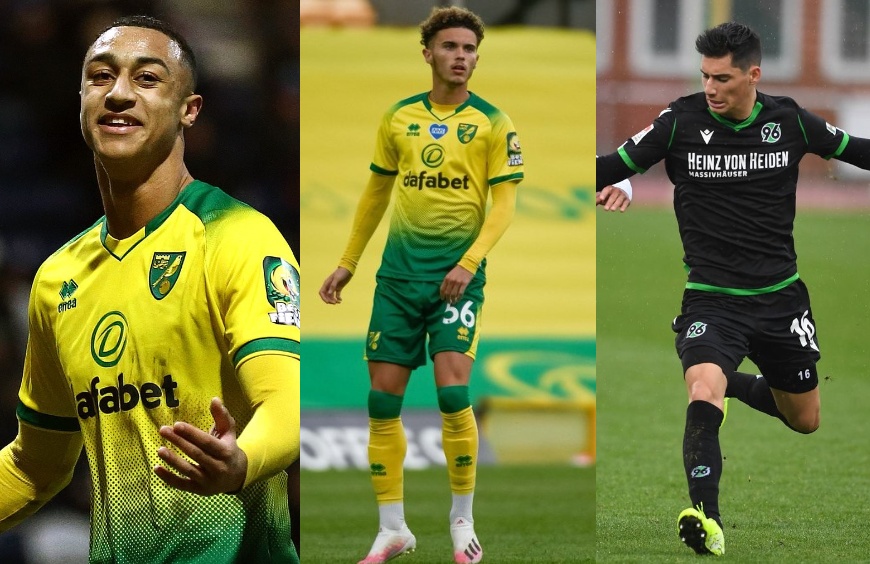 The full-time whistle blows on a sunny afternoon at Carrow Road. Norwich City have just been comprehensively beaten 4-1 by Italian Serie A side Atalanta in their penultimate pre-season fixture ahead of their return to the Premier League for the 2019/20 season.

It was an eye-opening experience and the first in a series of lessons City would struggle to contend with when facing higher quality opposition over the coming season. For many of the Norwich squad, this performance would be swiftly swept under the carpet but for one youngster, an impressive, mature and goalscoring performance, would place him into the limelight ahead of a breakthrough season.

“There have been some good performances in pre-season, you can’t read too much into it but you’ve got to give the manager a headache and I’d like to think that with some of my performances I’ve played well,” Todd Cantwell told the Pink Un’s David Freezer in his post-match interview.

Cantwell had made sporadic appearances throughout Norwich City’s EFL Championship-winning campaign in 2018/19 but found performances hard to come by as the Canaries’ season approached its conclusion. However, an impressive pre-season had not only seen the then 20-year-old midfielder secure a new three-year deal but successfully gain the admiring glances of head coach Daniel Farke.

“We’ll just have to wait and see what goes on,” said Cantwell in the same interview. Three months later, the Norfolk-born attacking midfielder would walk out with his teammates under the lights at Anfield to make his Premier League debut in the season’s opening fixture. The rest, as they say, is history.

Fast forward through the depths of a global pandemic, a squad overhaul, and yet another EFL Championship trophy, and we find ourselves facing a similar situation. After another sensational season in England’s second tier, a summer of uncertainty and excitement circles beneath the horizon of yet another daunting Premier League campaign.

There’s no hiding the club’s intention to purchase higher quality players to bolster Daniel Farke’s squad for next season, but that will never draw away from the fact that at Norwich City, youth will always be given a chance.

So this left me thinking, who could be the next Todd Cantwell? The player to surprise us all, break into the squad, and grace us with a new name to cement as one of our own.

Young English attacking midfielder Josh Martin has featured sporadically throughout the season just gone but found performances hard to come by as the Canaries’ season concluded, Sound familiar? Despite Martin spending much of his youth career in the Arsenal ranks before graduating from City’s academy, it is tempting to make comparisons with Norfolk-born Arsenal fan Cantwell’s rise to stardom.

Cantwell featured more often in his first full campaign for the Canaries, amassing 26 appearances across all competitions, in comparison to just 11 for young Josh Martin. Despite fewer appearances, Martin still finds himself with a similar total of goals and assists after his first full season in the first team squad. Both players completed their debut campaign with a single goal each, while Cantwell leads the way in assists with two to Josh Martin’s one – and yes both of their first assists for the club resulted in a Teemu Pukki goal…

It is worth addressing that the two have had rather different levels of exposure to first-team football. Cantwell, of course, enjoyed a beneficial loan spell in the Dutch second division with Fortuna Sittard, before returning to Norwich for an unexpected title run against opposition more than willing to test Norwich’s resolve. While Martin has had to make do with further experience in U23s football and the Checkatrade Trophy.

Martin’s first-team opportunities have also often come against opposition almost exclusively playing with a defensive mindset that Sam Allardyce or Chris Hughton would be immensely proud of. For example, Josh’s only goal came in a 2-1 victory against Tony Pulis’ Sheffield Wednesday side that enjoyed just 30% possession across the 90 minutes.

The Canaries command an army of talent currently on loan building experience in preparation for a battle to join Daniel Farke’s first team squad. As of May 2021, Norwich had 20 players on loan at clubs across Europe.

Granted, this total hosts a number of out of favour players looking to regain value and reputation ahead of a potential City summer fire sale, but there are also youngsters who have used the 2020/21 season to gain experience and will now feel ready, much like Cantwell circa 2019, to force their way into Norwich’s Premier League plans for the coming season – sorry Mr Drmic, this doesn’t include you.

Much like Cantwell, two City youngsters have taken a season in the Dutch second division to build experience. Sebastian Soto impressed with 7 goals in 12 games for Telstar, and even scored a brace on his senior United States international debut before returning to Norwich for the remainder of the season.

And, reportedly targeted by a number of Champions League and Europa League clubs before he arrived, U18 England international Daniel Adshead has also gained a season of experience with Telstar, amassing 28 appearances and assisting four goals from central midfield for his teammates.

A special mention too for Luxembourg international Danel Sinani who enjoyed a mixed first full season in professional football as well.

Could any of these three, who have built experience in Europe’s more technical leagues, force their way into Farke’s plans for the coming season?

Or perhaps more experience in British senior football is what’s required for a breakthrough star. It may not have been the route for Cantwell, but, of course, Ben Godfrey found his way into the heart of City’s defence after a season on loan in central midfield at League One Shrewsbury Town.

Akin Famewo has now gathered 61 appearances’ worth of experience at League Two, League One and Scottish Premier League level, plus about 30 seconds away at Manchester City on the final gloomy day of the 2019/20 season – they all count!

Famewo has impressed when fit while out on loan with Charlton Athletic this season, but injuries have hampered his progress – the former Luton youngster was due to join Farke’s pre-season squad in Germany prior to this season had injuries again not scuppered plans.

Famewo now finds himself with stiff competition should he re-join the first team squad for this coming season. Andrew Omobamidele has proven hard work and a little bit of fortune can help provide you with the perfect opportunity to stake a claim while in the limelight, all he had to do was take his chance. The former Leixlip United youth player – a small Irish Football Club in Kildare – had been a part of City’s first-team squad for much of the season, but was thrust into the starting lineup after injuries to both Ben Gibson and Christoph Zimmermann.

Despite his complete lack of senior experience, the Irish U21 international has impressed while starting each of the last eight games of Norwich City’s season. With many City fans now pushing for him to remain a part of the first-team squad, it’s evident that with opportunity comes momentum, something that so many City Academy graduates have taken advantage of.

Back in the summer of 2019, Cantwell was one academy graduate that despite experience gained on loan, hard work in training, and a chance in the starting XI, arguably hadn’t taken full advantage of his opportunity. Despite a flurry of impressive performances when the opportunity had initially presented itself, a mixture of poor form and other players impressing, left him on the periphery of Norwich City’s first-team squad come his inaugural Premier League campaign. Few would have anticipated his meteoric rise since.

A number of players will find themselves with a similar opportunity to impress this summer when returning from well-earned summer breaks. However, few find themselves in a better position than that of Republic of Ireland international and City academy graduate, Adam Idah.

Idah still however managed to remind us of all his talents come the final game of the Championship season away at Barnsley. After missing 10 games in succession, the youngster capped the final 38 minutes of his first full season with a goal and the iconic tagline of scoring both the first and last goals of one of the Canaries’ greatest ever seasons.

Idah may not have gained experience away from Carrow Road like Cantwell, but the Irishman has enjoyed almost a season-and-a-half as part of the first-team squad and possesses something that Cantwell didn’t – over 200 minutes of Premier League football experience.

Like Cantwell, Idah is very highly thought of at Norwich City, and with reports suggesting Idah is being considered for second fiddle to Teemu Pukki for the impending Premier League campaign, he finds himself with the perfect opportunity come the first day of pre-season.

It reaffirms the strength of Norwich City’s Academy and quality of youth prospects that players such as Bali Mumba, Sam McCallum and Daniel Barden are yet to even be mentioned during this piece, all of whom could very well stake their claim this pre-season, as realistically it’s impossible to predict who could be City’s next breakthrough star.

Who could have seen Todd Cantwell breaking into the first team after struggling to tie down a starting place in his first Championship campaign?

Who could have predicted Max Aarons making his league debut away in the 2018 Old Farm derby and missing just three games since?

The only certainty is that in Farke, Stuart Webber, and Norwich City, each and every youngster currently under contract at the club has a manager, team, and culture that believes in them and providing opportunity.

As Daniel Farke said himself in his post-match press duties after a 7-0 thumping of Huddersfield Town in April: “Not each and every young player is made for shining. I have to praise our academy and the attitude our young lads have. You need to be confident.

“Every club says the youth and their academy is their future, but it’s important on how you act. When I get the feeling a player is prepared, I will play (him) – it doesn’t matter if he is 18.”

Cantwell’s move from youngster to first-team regular was unique. Much like Godfrey moving from central midfield while out on loan to a £30m central defender, or Jamal Lewis scoring an equaliser away to Chelsea in the FA Cup and never looking back.

Despite Norwich City’s transfer budget significantly increasing after the record departure of the talismanic Emi Buendia to Aston Villa, the door as always will be open for a new young Norwich City star this coming season. Only question that remains…

Who is it going to be?