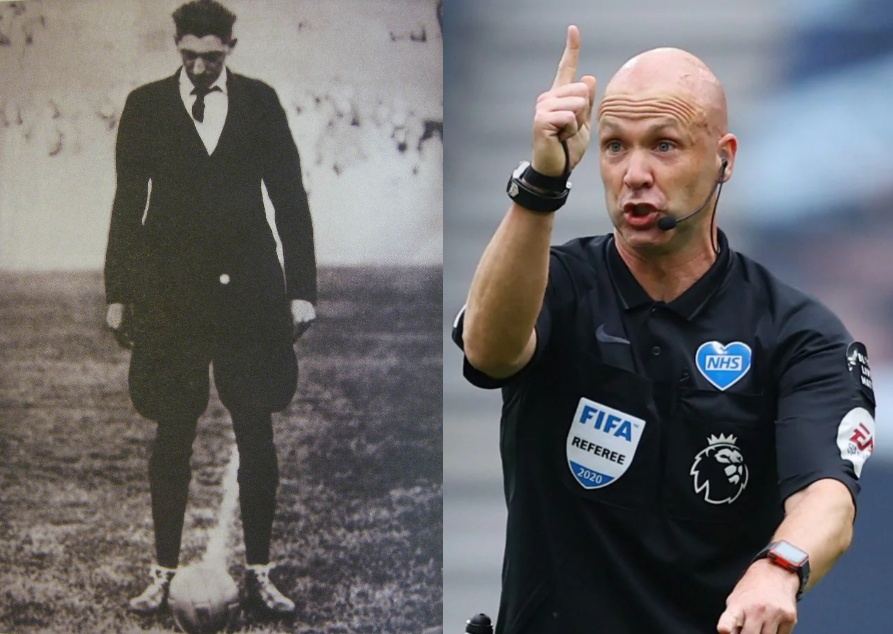 It’s guest blog time again and it’s Jim Davies time again. Today, by way of a very pleasant diversion from the Euro and NCFC transfer rumours, he looks at how football has evolved over the years through the eyes of Michael Oliver (well, not just him – other referees are available).

From the early days of unlimited numbers of men from different villages chasing a ball around with no clear rules, to the implementation of technology in the shape of goal line decision systems and the dreaded Video Assistant Referee (VAR), I decided to do a little research and see how the game has developed.

In the early days, the games of Association Football (or “soccer”, if you must) and Rugby were effectively one and the same. The use of the hand was allowed, and this only began to change from around 1848, when a meeting was held in Cambridge to try to standardise the rules, at least as far as schools were concerned, though some continued to allow carrying the ball in the hands until 1863.

Even after some degree of standardisation had been reached in 1863 at a meeting in London, there were still some huge differences to the modern game:-

There is some debate over who was actually responsible for establishing the laws of the game, but most acknowledge that the version produced in Sheffield in 1858 formed the basis of those we abide by today, albeit recognising that the Cambridge and London meetings were significant contributors. The desire to have a single set of rules was clear, they just took a while to evolve.

The Sheffield Rules of 1858 defined some of the basic rules, and gave them more clarity, though a lot still look very strange to our eyes. Some of the terminology has to be interpreted from this distance, for instance Rule 2 said “ Kick out must not be more than 25 yards out of goal.”

Was this a goal kick, in today’s terms? I can only guess.

Catching the ball was clarified – Rule 3 stated “Fair catch is a catch from any player provided the ball has not touched the ground and has not been thrown from touch. Entitles a free-kick.”

There were just twelve rules determined at this time, with Rule 12 saying “Each player must provide himself with a red and a dark blue flannel-cap, one colour to be worn by each side”, so clearly different shirt colours weren’t in vogue then – and there was nowhere to put a sponsor’s name!

However, before sending the new set of rules to the printer, it was decided to reduce them from 12 to 11, and Rules 6 and 9 were removed and replaced by a single rule; “The ball may be pushed or hit with the hand, but holding the ball (except in the case of a free kick) is altogether disallowed.”

From this, I assume that a free kick could be taken as a drop-kick, rather than from the floor, similar to how some rugby penalty kicks are taken.

Sheffield contributed further changes to the laws over the years. In the 1867 Youdan Cup, it was decreed that matches should last for “one hour and a half” together introducing the concept of the “Golden Goal”, which has been used in the 1990s, including the 1998 World Cup, before being scrapped in 2004 (but only after trialling the “Silver Goal” variant, where a team leading after the first half of extra time being declared the winner – an idea which was never popular).

The Sheffield rules also introduced corner kicks in 1869, followed in 1875 by introducing the crossbar.

Heading the ball, now a somewhat controversial issue, was never formally referred to in any of the rules, but was developed in Sheffield, and accepted as part of the local game. They didn’t realise it looked strange to people in other parts of the country, until members of the London FA found it amusing in a match in 1866. Maybe if the research into Altzheimer’s continues it will look strange again, though it’s hard to imagine.

1886 saw a significant step forward. The International Football Association Board (IFAB) was formed, to determine the laws of the game and make changes as needed. It was originally made up of two representatives each from England, Scotland, Wales and Ireland, and needed a three-quarters majority to pass any proposal.

In 1891, the two umpires – one from each team officiating the game – were replaced by a single referee. Until then, the referee had remained on the sidelines and was only referred to if the two umpires did not agree on a decision. This was also the year when penalty kicks were introduced, originally called the “Kick of Death”, somewhat dramatically!

In 1902, the rule allowing penalty kicks to be taken anywhere along a 12-yard line was changed, and the penalty spot was fixed, in a central position, 12 yards from the goal line. At the same time, the 18-yard box was defined, as well as the six-yard box, which had originally been a semi-circle, similar to that used in hockey.

The shape of the 18-yard box was finalised in 1937, when the semi-circle was added to ensure that players remained 10 yards behind the penalty spot.

Bureaucracy increased in 1904 when FIFA was established in Paris, with France, Belgium, Denmark, the Netherlands, Spain, Sweden, and Switzerland the founding members. FIFA joined IFAB in 1913, and while the four home countries were given a vote each, FIFA had four as a whole. Six votes in favour were needed to make any changes to the laws.

In the meantime, in 1912 it was decided that goalkeepers could only use their hands in the 18-yard box, where before they could use them anywhere, and 1920 saw a rule change so that players could not be offside from a throw-in, and that remains the case today.

The off-side law itself was changed in 1925 so that only two opposition players had to be closer to the goal line than the attacking player receiving the ball, instead of the previous requirement for three. That was subsequently modified in 1990, in an attempt to increase goal-scoring, so that the attacking player could be level with the defender.

In 1992, goalkeepers were prevented from handling back-passes played deliberately to them, which has obviously led to some interesting moments when a keeper fancies himself as another Messi, and tries to dribble clear. This was the last major tweak to the playing rules, though there have been other developments that make a major impact these days.

Goal-line technology was brought in in 2013 to the English Premier League, following the use of cameras and Hawk-eye systems in both tennis and cricket, and has proved to be generally accepted as a good thing, with only one recorded instance of failure so far (much to the benefit of Aston Villa).

Which leaves only the dreaded Video Assistant Referee (VAR) system, introduced in the 2017 Confederations Cup, and used in Major League Soccer shortly after, before being used (or mis-used) in the Premier League in the 2018-19 season.

It’s a system that has received a lot of abuse in this country, though other countries using it seem to have fewer issues with it than we do. Maybe that has something to do with the way PGMO (Professional Game Match Officials, the Premier League referees group) are administering it here, trying to effectively referee the game from miles away, instead of being as FIFA intended to correct “clear and obvious errors” by the referee at the match.

But that’s a subject for another day!