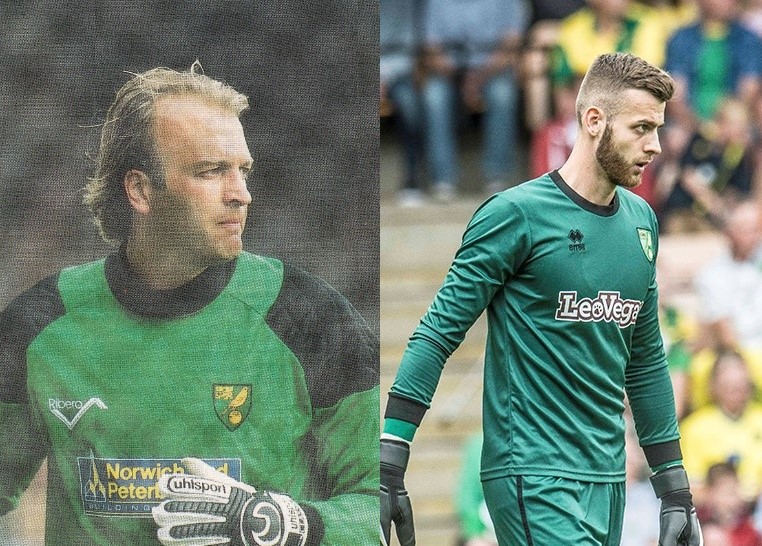 City legend Bryan Gunn joins MyFootballWriter to discuss his son’s delight at becoming a Canary, the battle for the number 1 shirt and why Angus has a lot of catching up to do on the golf course.

“Obviously he’s delighted with it, it means he can come back and have a few more golf days in Norfolk!”

These were the words of Angus Gunn as he described his dad Bryan’s reaction to his return to Carrow Road. As Bryan answers the phone two days later for an exclusive interview with MyFootballWriter, he’s answering from the Royal Norwich golf club, on a charity day for the Motor Neurone Disease Association.

The picturesque venues that populate Nelson’s County aren’t the only upside to Gunn Jr.’s return to Norwich City, of course. “I’m delighted that he’s come back to a place he knows and a place he’s wanted,” Bryan says.

After three years of uncertainty, it was important for Gunn Junior to go to a club that made him feel like a key target. Other clubs may have been interested, but the Canaries’ early swoop sealed the deal for the 25-year-old, according to his dad. “Norwich acted very early in the transfer market to make this happen. They’ve made an effort to get this deal across the line as quick as possible,” he said.

“There were other interested parties, but some weren’t able to move as quickly, some were waiting to see what else happened in the transfer market. Stuart Webber and the recruitment team have acted swiftly. It’s a great move for Angus at this stage of his career.”

It’s a love story that’s lasted 25 years, and survived even the toughest of times, when a 13-year-old Angus remained at, and fought for, a club that were in turmoil and that had just sacked his dad in rather harsh circumstances.

“Angus is a bright kid,” Bryan said, discussing the horrendous 2009 he and his club endured. “He was proud that I got the opportunity to be the manager. He used to sit in the stands and as a Norwich City fan he was disappointed, as every fan was, when we got relegated. He was disappointed as a fan at the Colchester game, and he was disappointed for his dad because of the outcome as well but we all got over that, it was nearly 12 years ago.”

“When the chance to sign for Norwich City again came, it was a dream come true. To play for Norwich City in the Premier League is his ambition, and I’ll be the proudest man in Norfolk the day he does that.”

Gunn certainly doesn’t face as simple a task as he did during his temporary return for the 2017/18 season, however. Unlike Daniel Farke’s debut year, City have a quality, established goalkeeper in the form of Netherlands international Tim Krul. Bryan doesn’t see things quite as simply as some supporters do, however, despite his admiration for Krul. “My own personal view is that I don’t think you can guarantee anyone number 1 status,” he says, “but obviously Tim’s got himself into the position over the last few seasons where he’s built up a great reputation.

“He’s helped the club get promoted on two occasions, so he’s obviously highly thought of by the staff, by the fans, in the world of football.

“There’s always challenges ahead of you and you’ve got to be able to stand up to the challenge; meet it head on. The best thing for Norwich City is that they have people competing for every position. Daniel [Farke] is the only person, at the end of the day, who will decide the team. He’ll be doing it on what he sees in training. Over the years that he’s been [at Norwich] he’s not been scared to change and rotate players, and give players their opportunity.

“It’s a battle royale with Tim Krul, but that’s something that the football club should relish because they’re definitely going to get the best goalkeeper on the pitch. Competition for places is important and certainly in the goalkeeping department it’s just as important as any other position on the pitch.”

Angus clearly understands the gravity of the task he’s up against, and the six-times-capped Scotland international was keen to highlight the work his son has been been doing. A family trip to the Algarve may have suspended City’s announcement of Gunn’s signing, but it didn’t prevent their new goalkeeper from preparing for the challenge ahead.

“It’s a clean slate for Angus,” says Brian. “He comes into pre-season training on day one with a very positive attitude. He’s worked really hard. He’s been on holiday for two weeks in Portugal but he trained every day at a place called The Campus, where I believe Ben Gibson also trained. Angus has booked in there for a 7:30 slot every morning. This week he’s working with a goalkeeping coach in the North-West [Wigan Athletic coach Aaron Cameron], just to get that feel for the ball again.”

The next aim is simple for Bryan, who highlighted his reaching of the 500-appearance mark as a key achievement in his own career: “Angus is fast approaching 100 professional games, so hopefully quite quickly he’ll hit that 100 mark and then the next target has got to be the 200 mark.”

Six of those appearances came for his native Scotland, a statistic Bryan lists at a pertinent time, as he moves on to Angus’ potential international career; a subject he’s clearly thought about but that isn’t at the forefront of anybody’s mind as Gunn embarks on his new club adventure.

“It’s Angus’s decision at the end of the day,” says the City legend, discussing whether his son will plump for the country his father appeared for, or the nation he grew up in. “He played for England at youth level, he played for the Under-21s, he’s been called up for the friendly against Brazil when he was at Norwich in 2018. Angus is very much English, he’s born in Norwich, he just happens to have a very Scottish name, which is probably my fault!

“That might be a decision for later, it’s not a decision for now. His main objective now is to win a place in the first team, play games and then take whatever opportunity comes along. I was very proud when he got selected for that England squad, just like the rest of his family was.”

A game for Angus against Bryan’s beloved Tartan Army rammed home the dilemma for the Scot.

“Angus had to play a game in Inverness, which is 20 miles north of where I was brought up. He played for England versus Scotland under-16’s. 25 of his family and friends were there, and I don’t know if they were supporting Scotland or Angus! The social media followers are pushing me to push him towards Scotland but at the end of the day Angus is his own man, and that’s his decision.”

Another area in which Angus is allowed to be his own man is when assessing performance and areas requiring improvement. Bryan is always happy to offer his support but leaves the coaching up to the designated professionals.

“I don’t tend to [discuss technical issues with Angus],” he said. “That’s the goalkeeping coach’s job. Ed Wootten [Norwich City’s goalkeeping coach, who also worked with Gunn during his 2017/18 loan spell] is more qualified than me and he’s got to deal with that alongside Angus. To have me in the background telling him different things wouldn’t be right. I think it’s important that you let the coaching team do their job.”

As far as golf, however, you can be sure that Gunn Senior will be giving some pointers this summer, as he looks to close the gap between his son and him.