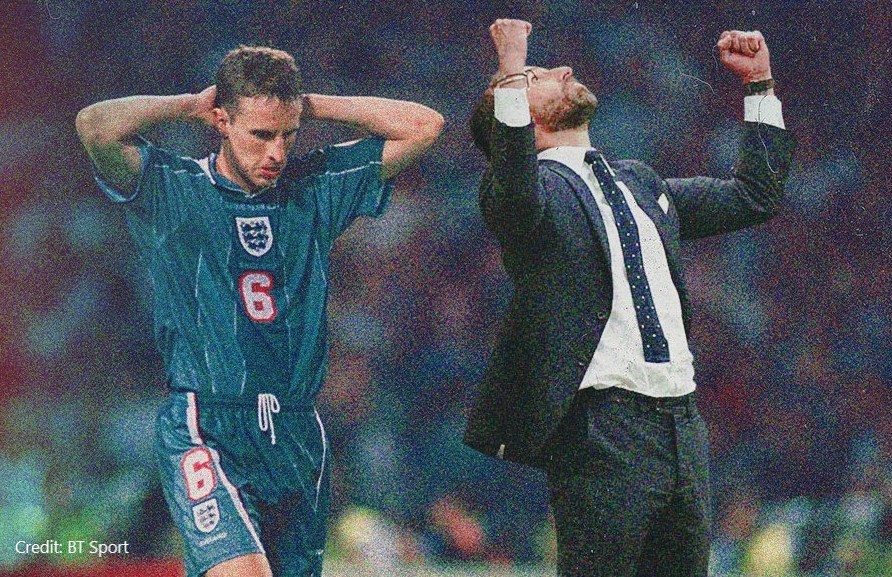 All of the things that we love in Daniel Farke are present in Southgate. The calm measured responses to even the daftest of questions; the ability to remain calm in the white heat of battle; the ability to instill in his squad those same values he himself lives by, and the ability to be all of those things while still having grace, dignity and compassion.

But while Daniel superbly leads the Canary Nation, Gareth, right now, is leading the whole nation.

Rarely does the calm demeanour slip, but no one could deny Southgate those few brief moments of exaltation as he broke out in a frenzy of fist pumps and bulging veins as the Wembley crowd belted out Sweet Caroline.  He deserved his moment. Just as his players did.

While Southgate was quick to distance last night’s win with any sense of redemption for that missed penalty on 26 June 1996, he’s only human. It must have flicked through his mind.

The pain is still there. That much is clear. But as ever with Southgate, it’s not about him. It’s never about him. He doesn’t still suffer that gnawing pain because he feels sorry for himself; it still stings because he thinks of those he thinks he let down: his teammates, the fans, the country.

Except no one blamed him. In fact, we admired him for having the guts to step forward and take a penalty when more established, senior pros (ahem, Paul Ince) looked the other way when Terry Venables scoured his squad for volunteers.

But it’s a burden he’s carried for 25 years. And it’s clearly weighed heavily. Especially when major international tournaments come upon us and when Three Lions echoes again. Close your eyes, play that tune in your head and what do you see?

Gazza scoring against Scotland, or missing by millimeters from two yards out against Germany?

Or a distraught figure in grey turning away, ashen-faced, after having his pen saved?

So, while no one apportioned blame to Southgate, he knew that however many people told him otherwise, he had created a memory, and not of the good kind. And so when he talks of his role in helping this group of young men to create more memories for the nation – good ones – we know what he means.

And he’s succeeded. In a way that he neither intended nor believed.

While Southgate understands completely what it means to manage this national team and the responsibility it entails, essentially his task is to get a football team to win some games of football. But even if Sunday doesn’t go the way we have all dreamt it – and let’s be honest, it’s a 50/50 game at best – Gareth has already achieved so much more. Something that seemed impossible only a few short weeks ago.

He’s offered a platform for positivity, decency, and just being nice; things that have been in short supply in this country over the last few years.

The pandemic has brought this nation to its knees, killing many of our loved ones along the way and threatening to kill many more, but, however fleeting, Team Southgate has given us something to be happy about and to be proud of.

We all have our own doubts, worries and fears – ever more so for all the reasons above – but between 8pm and 11pm last night they were forgotten. Everything, for that short time, felt fine. Better than fine. Much better.

So, yes, it wasn’t England’s finest performance, the penalty was undoubtedly a bit soft, and a similar level of performance on Sunday probably won’t be good enough to win it, but when it mattered, when it really mattered, Southgate and his men found a way to achieve something that’s only been achieved once before.

That they did it with humility and decency, for me, made it doubly special.

So, if, to you, Football’s Coming Home, means England winning the Euros outright, hold your horses. An even bigger challenge awaits on Sunday. But if, as I believe intended, you see it as a nod to the past and a belief that one day those years of hurt will have been worth it, then I’d say it’s job done.