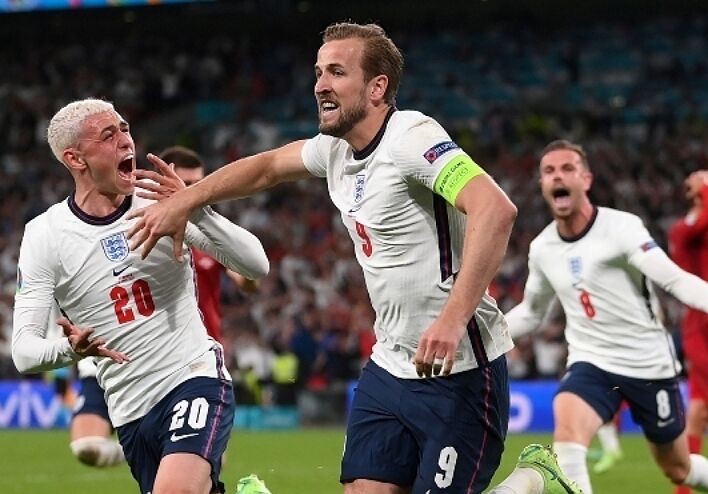 Gareth Southgate is well known for switching to a back five for big games, but a tweak to a narrow front two instead of a wide front three could provide his side with a wealth of benefits, including solidity in midfield, danger in behind and increased involvement for Harry Kane.

There was no surprise when England revealed their line-up for Germany’s visit to Wembley. National treasure Gareth Southgate returned to the trusty back five that took him to the World Cup semi-final and added solidity in big games.

The Three Lions matched up Joachim Low’s dangerous wing-backs Robin Gosens and Joshua Kimmich, effectively nullifying the German threat. Although there were some heart-in-mouth moments, control won the day and Southgate yet again proved his tactical acumen.

As soon as England squeezed past Denmark via a slightly lucky Harry Kane winner it was widely assumed it was this system Southgate would call in, ignoring the added complexity that was Italy’s 4-3-3; the Azzuri don’t play with a 3-4-3, so England can’t match them up using their big game setup.

So what can they do to nullify Italy’s threat and use their preferred back five? Play a 5-3-2.

A change from the detailed and fragile system the Italians have used throughout EURO 2020 and pre-tournament friendlies seems unlikely at this late stage, however, and it seems that one of the aforementioned will have to perform the Spinazzola role.

This advanced positioning allows notional left-winger Lorenzo Insigne to come inside and act as a second striker, forming a front three in possession. Insigne’s position between full-back and centre-back has been a constant threat for the Azzuri, but a back five would both decrease the space between defenders and allow for one to be assigned to Insigne, the excellent Kyle Walker ideally.

The result would be that England retain an overload around their box (5v4), even accounting for Italy’s advanced full-back.

-Matching up the Azzuri’s excellent midfield

Of greater concern to Southgate will be the midfield battle. The main issue with a 3-4-3 is that it creates a 2v3 in midfield against a 4-3-3. Declan Rice and Kalvin Phillips’ excellent energy has negated this issue against weaker sides, but Italy’s is perhaps the most technically apt midfield in the tournament.

The trio of Jorginho, Barella and Verratti is the most important part of Mancini’s approach. Not only are they all intelligent and athletic enough to press with aggression at exactly the right times, they’re the vital facilitators of Italy’s quick passing moves. Jorginho’s performances at the Euros have even inspired ex-Chelsea coach Maurizio Sarri to claim that he’s a contender for the Ballon d’Or.

The added energy of Mason Mount or Jordan Henderson would be welcome in this battle, and if England can’t out-play the Azzuri midfield they can at least tactically nullify them.

-Preventing Bonucci and Chiellini from bringing the ball out

Another characteristic of this loveably hateable Italian team is that its experienced centre-backs are excellent at aggressively and technically starting attacks. Chiellini especially is partial to a charge into midfield, and faces little resistance against one striker that must cover the three Italy build up with (Di Lorenzo stays deep, contrary to on the opposite flank).

Kane is many things but an energetic presser he isn’t, and again would provide little resistance. Raheem Sterling, however, is a very intelligent presser and the Manchester City attacker would provide a real problem for the Azzuri if pressing as part of a central two, especially if their preferred route (through Jorginho) were blocked by an energetic three in midfield.

-An added option when passing out

While the Three Lions’ own press will be a consideration, a more prominent problem for Southgate will be Italy’s. Mancini has his side push high up the pitch throughout, one of the midfielders joining Insigne, Ciro Immobile and Federico Chiesa in a pressing front four.

A back three would offer England another option to pass around that four. Southgate has been considerate of the need to add options in the backline to do so, asking Rice to drop into a left-back position to allow Luke Shaw to push forward while retaining the same number of horizontal options at the back.

-Kane dropping in to create an overload

Although Italy were tested at times in their two games against Austria and Belgium, Tuesday’s semi-final against Spain was a different level of competition for Mancini’s men. The main tactical reason was the role of the brilliant Dani Olmo, the attacking midfielder or winger who played as a ‘false 9’.

While the Azzuri’s midfield trio was focused on nullifying and battling with that of La Roja, Olmo became the spare man, dropping deep and helping Spain outnumber their opponents. The large majority of Spanish joy came in the form of quick passing moves through the middle of the pitch, where they drew the Italians in before breezing past them, the ball already moved on to a teammate.

That Olmo facilitated this is encouraging for England fans, given Kane’s preference to drop deep and turn with the ball. He has the ability to become the extra man in the same way that Olmo did, with Raheem Sterling the difference that could make England even more dangerous than Luis Enrique’s side.

There’s no player more fearsome at the Euros than Sterling, who has defenders doubling up and backing off every time he receives the ball. Italy will not leave one of their aged centre-backs one-on-one with Sterling, allowing Kane to drop as he wishes.

Part of the reason why Olmo couldn’t fulfil the ‘false 9’ role to its full, dangerous potential was that he had to drop very deep to completely escape the attentions of Bonucci or Chiellini. This did provide the hoped midfield overload but left Spain with nobody bearing down on the Italy box.

Sterling’s ability to peg defenders back means that Kane, while still dropping to help, would be able to pick the ball up in his favoured number 10 position, with several opportunities for trademark assists or 20-yard drives into the bottom corners.

The dangers of this setup

-It leaves the right-back completely free

If Southgate did play a 5-3-2, full responsibility in wide areas would fall to Luke Shaw and Kieran Trippier. On England’s right side this wouldn’t be an issue. The habits of the left-back and Insigne mean that there could be a man defending against each.

But this system works on the assumption that the right-back will play their usual reserved role, leaving Shaw, a very good one-on-one defender, alone with Chiesa. If Mancini realises that his right-back is marking nobody, however, he may well free them up to attack, either creating an overload on England’s left or allowing Chiesa inside, giving all of Italy’s brilliant front line the opportunity to go one-on-one.

The expectation is that the 2006 world champions will attack the final as they have every other stage of the competition, but if they don’t, this 5-3-2 could come unstuck.

It packs energetic and tactically astute players in at the expense of individual brilliance. Mount, Sterling and Kane are the only players in the lineup that could produce the moments required to break down a stubborn defence, so the system does rely on Italy’s preference for an aggressive approach.

Of course, Southgate will have decided his setup long before now. A 5-3-2 may not be used, a five at the back may not even be used, and there’s still a fair amount left to predict before 8pm. By now England’s cool, calm leader has its people’s full trust, and whatever he has planned will surely be the best approach- even if, as usual, we don’t know it until the final whistle.