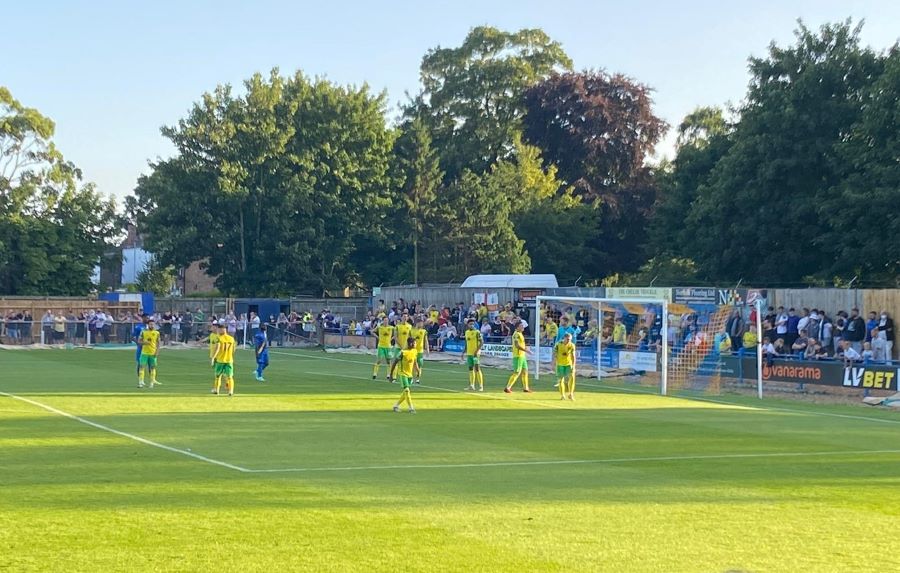 It was the gentlest of preseason workouts, but for the many City fans who had turned up at The Walks, it was much more than the chance to see some new heroes for the first time.

Having been starved of live football and the sense of community that the lockdown restrictions have taken from us we have largely maintained relationships via social media, so to be together, albeit in a restricted crowd was something very special.

Friends hugged, stories were told, and everyone talked about how desperate they were to see a full Carrow Road on August 14th whilst acknowledging the worrying rise in cases and what that might mean.

On the pitch, we got our first glimpses of Billy Gilmour, predictably busy in possession and showing a nice range of passing, and Milot Rashica, who showed some good touches while inevitably looking like a player trying to get to grips with his role in the side.

Any comparisons with Emi Buendia are premature, particularly as City set up with three centre-backs and Bali Mumba and Przemyslaw Placheta pushed high up the pitch as wing-backs with Lukas Rupp controlling proceedings from the number 10 position.

That caused some confusion early on as Rashica and Kieron Dowell struggled to find space, although the latter looked very confident in possession and played some nice first-time passes as well as taking his two goals well.

Although Lynn were tidy, they barely threatened the City goal and to be honest it was something of a shock when Barrows scored after Morais’ thunderbolt had come down off Angus Gunn’s crossbar.

It was clear as the game went on that City’s objective was to work on their possession-based style rather than push for more goals, and the back three of Christoph Zimmermann, Andrew Omobamidele and Jacob Sorensen, who exudes calmness in whatever position he is asked to play, looked very solid.

Sorensen is a player who will, in my opinion, have a significant part to play this season, and like Mumba showed why he has earned an improved contract.

Elsewhere, Jordan Hugill worked hard but his touch was too often poor when it really mattered but Todd Cantwell looked very committed when he appeared for the second half, and his superb through-ball set up Adam Idah, who looks in terrific condition, for the final goal.

Placheta continues to be an enigma. Good on the ball, pace to burn and a good work ethic yet so rarely producing an end product where it really matters. I believe that there is a game-changing player in there somewhere, but he has yet to emerge.

With run-outs for several of City’s impressive youngsters and no obvious injuries, it should be a night that Daniel Farke will be happy with overall.

It will be interesting going forward to see whether the three at the back approach will continue. City certainly have the personnel, particularly if the expected new centre-back materializes, and Sorensen will have put down a marker at Lynn to be considered for that role too.

However, with Grant Hanley, Kenny McLean, Dimi Giannoulis, Max Aarons, Teemu Pukki, Pierre Lees-Menou and Ben Gibson still to return, along with any other new arrivals it’s too early to draw many conclusions, but the squad is already looking strong and the competition for places fierce.

Exactly how Farke wants it.