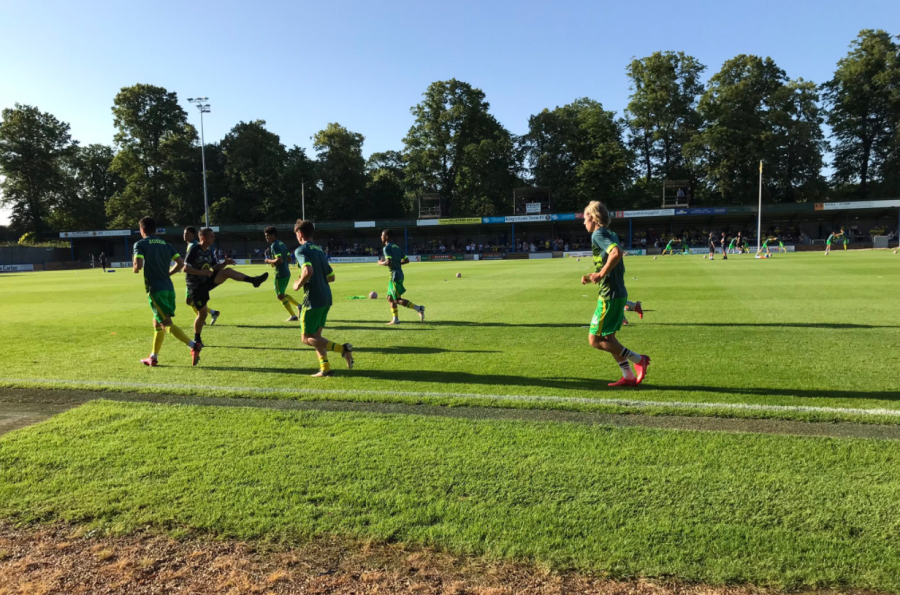 The ball never fell kindly for Milot Rashica or Billy Gilmour, despite their endeavour. Kieran Dowell, on the other hand, looked a smooth operator at The Walks.

Understandably, all eyes were on Milot Rashica, Billy Gilmour and Angus Gunn as Norwich City kicked off their pre-season campaign at National League Kings Lynn. They represent 75 percent of the Canaries’ exciting summer of recruitment, as well as a calibre of name that is perhaps new to the club. There is certainly a level of intrigue when watching a Champions League winner take to a fifth division pitch.

The trio produced a few classy touches but not too much of tangible note, and the impression given was one of tuning up. In reality, this match was never going to be much more than that, but it did reveal City playing a back three.

But there was just enough from each new signing to offer an insight into what they will offer at Carrow Road, and Gilmour’s aggressive pressing and clear love for a tackle offer hope in the absence of Oliver Skipp. Rashica may not have impressed with his final ball but he showed how useful his pace and positioning could be. And Gunn showed how comfortable he is in possession; Daniel Farke’s coaching during his early development a likely contributor.

Farke said of Gilmour: “Of course he has to adapt to us, to learn how to press, how to position. This will come, we still have a few days to prepare. I’m quite pleased that we have him.”

And offered similar sentiments around his new Kosovan: “He still has to work on his fitness level. He has worked unbelievably hard in the first two weeks in training.

“You could see what a quality player he is, as soon as his sharpness comes he will be a really good player for us.”

In these slightly by-the-book games, the difference-maker is often a player that can provide a spark – or a defensive error. Kieran Dowell was that man, the ignition in a game that too often drifted into cruise control.

Dowell was, of course, aided by a defensive error, capitalising on a lack of concentration to steal the ball in the Lynn box before finishing smartly, but his pressing had been clever, well-timed and viciously executed throughout. These were encouraging signs when questions had arisen around his defensive ability.

Often it’s been remarked that the 23-year-old drifts in and out of games, that he’s never involved throughout. It could be, however, that his greatest criticism is his most valuable strength. He allows defenders to relax while he plots his next move, floating in the periphery before exploding front and centre with a delicious first time ball or a ruthless strike on goal.

City have players that can be involved throughout, dictate the tempo of a game. Todd Cantwell played that role exceptionally well in the second half, slowing things down and moving the ball around the back before deciding when he should turn passive possession into attack. Gilmour is another with that ability.

Proceedings at The Walks hinted at something new, however. Rather than the team of passing midfielders Farke has previously aimed for, the added dynamism and unpredictability of Rashica and Dowell can give City more variety and the ability to change the tempo from slow to break-neck at any given moment.

While on the surface Stuart Webber’s new recruits hinted at an increased reliance on counter-attacking, their arrival may actually be predicated on this dynamism and change of pace in possession.

Rashica recently discussed how he saw himself fitting into Farke’s style of play, seemingly concurring with this theory: “The playing style of the team can fit very well on me because they like to keep the ball and play offensive football.

“I hope that I can use my quality going one-on-one or making deep runs because I know here we have a lot of players that can play these balls.”

Of course, there is a great deal to be played out during pre-season. If Farke really did see this solely as a fitness booster it’s possible that his back three was out of necessity. There is a case for the mother of invention, but the back three debate has been had and will be again, with the boss likely to spring a number of further surprises in the coming weeks.

His claims following the opener that every position other than the goalkeeper is worth looking at in the transfer market show how much work is left to be done.

But this was a bright start, a step into a bold new Norwich City, as they enter an era-defining season.

There is hope for the future provided by the new faces in NR1, but as Milot Rashica and Billy Gilmour were acclimatising to life in Norfolk, Kieran Dowell reminded us that there’s plenty of fresh optimism left to be found in the old guard.