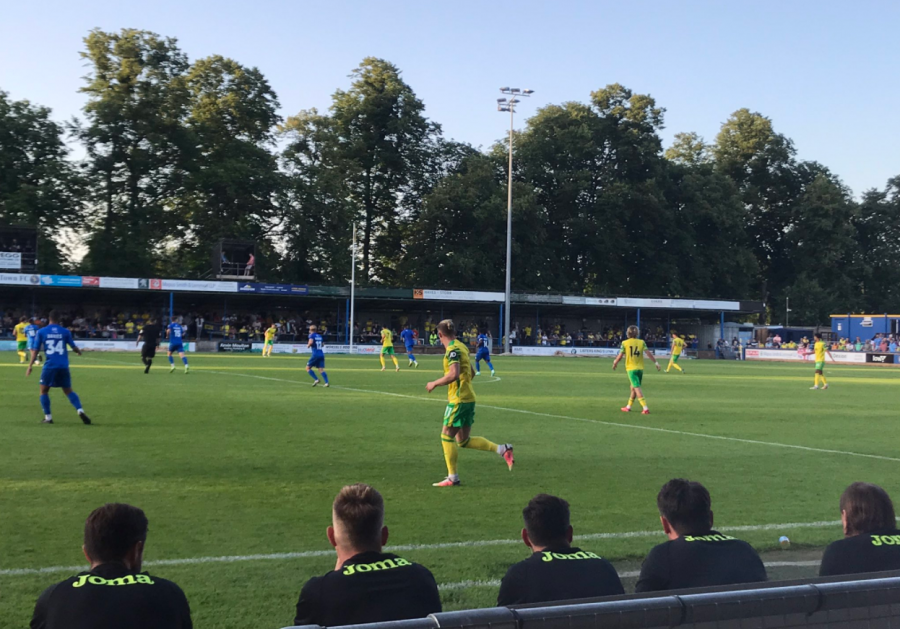 And so we’re off! Well, sort of. At least the phoney war is underway, even if we have to wait a little bit longer for the real thing.

Around this time, 28 days from now, we’ll be mulling over the whatabouteries and what-ifs of City’s opener against Liverpool. Hopefully in an exultant, jubilant way, but we’ll see. If you can’t dream big before a ball has been kicked in anger, then when can you?

Friday night’s run-out at The Walks, beautifully described on these pages by Robin Sainty and Samuel Seaman, was as gentle as they come and was the ideal way to dip the collective toe into the waters of pre-season. It gave us a glimpse of what Billy Gilmour and Milot Rashica look like in a yellow and green kit and got some yards into the players’ legs.

Whether the three-at-the-back was a sign of things to come or was borne out of necessity, only time will tell, but it is clear that in Max Aarons (or even Bali Mumba) and Dimitris Giannoulis, we possess full-backs ideally suited to the role of modern-day wing-back.

Either way, it’s a system that Daniel Farke has tinkered around the edges of before but, minus having three fit and suitably adept centre-backs available to him, was unable to use it for long enough to refine it in any way.

But now, with a new centre-back on the shopping list – one who no doubt is comfortable on the ball – and with Andrew Omobamidele already forcing himself into the reckoning, the option of a back-three looks to be there. Throw into that mix Grant Hanley’s outstanding display at the centre of a three against England and a fit-again Ben Gibson, and it’s one that Farke knows he could turn to if the situation demands.

The downside of this system is, of course, the tendency for it to unravel into a back five when you’re not having enough of the ball, as demonstrated beautifully by England in last Sunday’s Euro Final.

It demands much of those playing in the centre of midfield (I’m looking at you Billy G), whatever the chosen formation, to dictate the pace of the game and ensure you have enough of the ball to get those wingbacks high enough up the pitch to contribute in the final third. A tricky balance to strike but one that offers solidity if implemented properly.

While the attacking third won’t really be up to speed until Teemu Pukki returns from his much-needed break (if ever anyone needed a full recharge of the batteries…) there was an interesting new face added to the mix in the early part of the week in the form of the wonderfully named Pierre Lees-Melou.

This one was classic Stuart Webber. No prolonged rumours, no ‘in-the-know’s’ with half a story, barely an inkling in fact until an hour or two before the club made it official…

At 28-years-old, Monsieur Lees-Melou is not one destined to spend time too much time on the fringes and at 6 ft 1 in is one of those targetted who they think will add a certain athleticism and physique to the squad – one of its big deficiencies in 2019-20.

Handily for me, one of my old footballing adversaries from the 1990s is now a resident of Nice and so it was to him I turned for a knowledgeable and unbiased view on our new Frenchman:

So, one who, by the looks of it, is unlikely to pull up loads of trees but who can churn out solid 7.5/10 performances – something we were crying out for two seasons ago. Also, as someone who’s captained a team in one of Europe’s elite leagues, it looks as if we have ourselves another leader in the dressing room.

While Lees-Milou appears not yet to be in the house, it must surely be imminent, giving him a valuable few weeks to acclimatise himself to his surroundings and the intricacies of Farkeball.

And one final thing, as mentioned by one of the #NCFC Twitterati. If, in celebration of our new Frenchman, the whole ground is at some point not singing his name to the tune of Vindaloo, then we’ve definitely missed a trick.