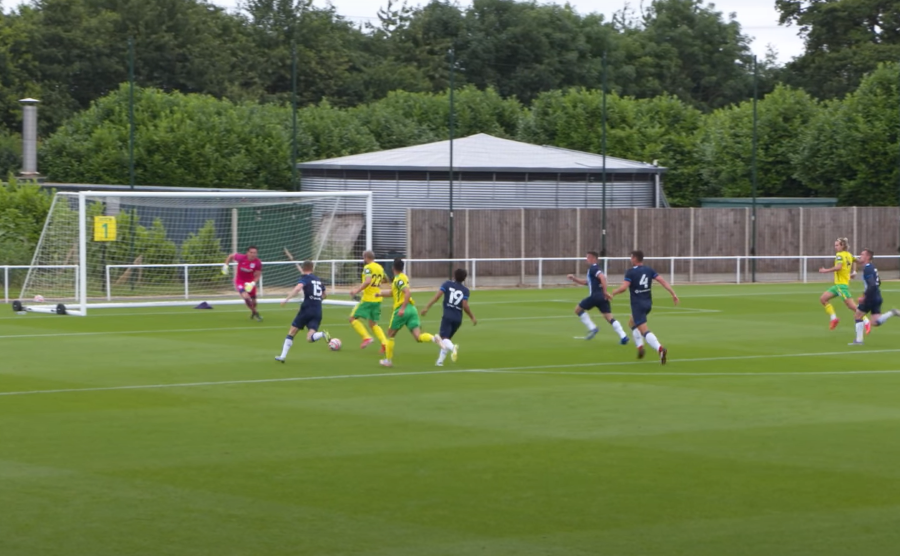 Lacking in rhythm and without their full complement, City got the job done against Huddersfield.

There were shades of their clash with the Terriers in September 2019, when the Canaries dragged themselves over the line as they slowly shook off their relegation hangover. On that day, when Adam Idah’s first league goal won it late, Daniel Farke’s side didn’t really seem to know what they were.

The star players are starting to filter back – Teemu Pukki and Tim Krul appeared for 45 minutes each – but we’re yet to see them all on the pitch at the same time, and tactical refinements are still being made less than a month until the big kick-off.

That’s not to say that there were no impressive performances. Pierre Lees-Melou’s was a highlight, and almost as soon as he got around the edge of the box a chance was created, his deflected effort creeping just wide.

The Frenchman was spraying passes left and right with ease, combining well with Todd Cantwell to set up Kieran Dowell’s blazed shot before finding Milot Rashica to roll into Lukas Rupp. The 30-year-old could only find the ‘keeper’s chest.

To the German’s credit, he had been involved in the game’s only goal, charging forward with Cantwell after Bali Mumba had stolen the ball. Rupp poked through for Pukki who’s lovely dink gave City a 13th-minute lead.

The first half faded away, plenty of huff and puff but little by way of clear-cut chances before Farke rung the changes. Off went Cantwell, Pukki, Krul and the quiet Rashica, and on came Idah, Jordan Hugill, Michael McGovern and Onel Hernandez as City lined up with a front two.

Huddersfield then took control in a frustrating half for the Canaries. Pre-season fixtures may notionally be non-competitive but the teams slipped into their automatic roles.

Norwich were too content to sit on their lead and counter-attack, although Hernandez’ danger on the break perhaps gave Farke a reason to give him a second chance.

Early after the break ex-Canary Harry Toffolo, who won the FA Youth Cup with Norwich, broke into the City box and saw his low drive blocked by a well-positioned Przemyslaw Placheta.

The Terriers didn’t have to wait long for their next opening, Scott High played through on goal but was denied by a combination of Rupp and McGovern.

Playing out from the back was becoming a problem, no wonder with a back four that had never played as a defensive unit before. Placheta had impressed yet again in his left-back role, but miscommunicated with Andrew Omobamidele, allowing Josh Koroma to go one-on-one with McGovern.

To the Pole’s relief, the Huddersfield number 10 dragged wide.

This seemed to wake City up and they briefly wrested control back. Dowell’s low free-kick was well saved by Ryan Schofield before Hugill planted his header firmly over the bar.

Hugill’s tendency to look unlucky in a yellow shirt is becoming a pattern, and after Pukki had made pre-season goal-scoring look so easy the former West Ham striker’s cut a slightly frustrated figure.

He thought he had his chance when Idah slid past the ‘keeper, but Hugill was beaten to the punch by a Huddersfield defender.

The Irishman, on the other hand, wouldn’t have to wait much longer. Two minutes later, after Dan Adshead – a bright spark in a strong crop of Norwich under-23s – had nearly set up Hugill, the ball looped to the number 35 to smash home on the half-volley. Job done.

Toffolo’s low free-kick looked dangerous but was saved well by McGovern to round off a good test for Farke’s City.