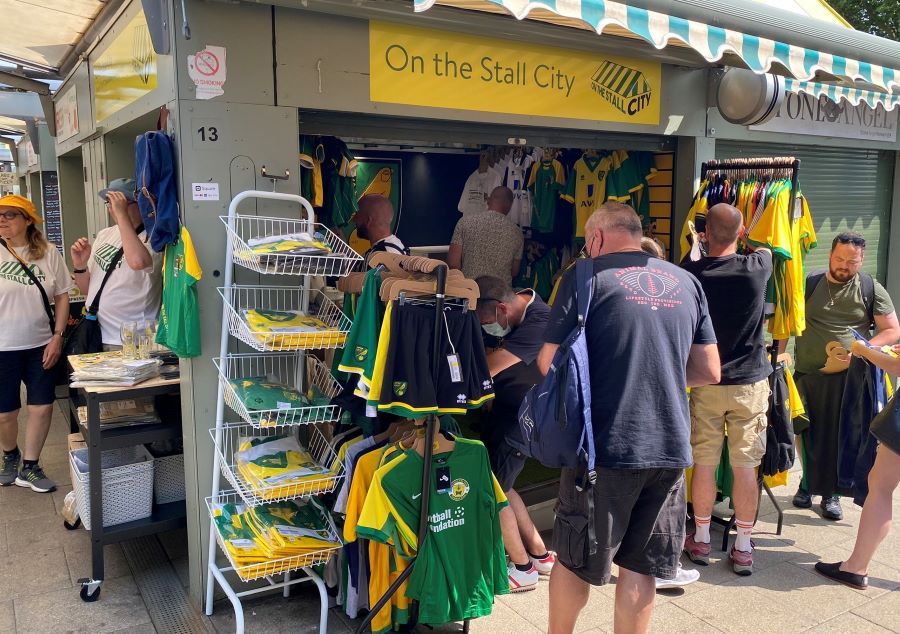 On a Saturday I would normally rebut any suggestion from Mrs P that she’s going shopping in the City and wants me to go with her. Something along the lines of one of the dogs isn’t well and I need to stay with him/her or I need to watch the underwater hang gliding live on Channel 321. Some fabricated excuse like that as I hate shopping and there’s rarely anything I want to look at, let alone buy.

But this Saturday just gone was rather different as Sue had earlier made me go through our wardrobes to see what I could dispose of.

I found loads of old NCFC memorabilia, some of which I will never offload, but I came across a few items I would never require anymore so we decided to drop them down to *On the Stall City* at location #13 on Norwich Market – opposite the Garnet.

That’s the stall leased by Andy, Sharon and Jacob Bowles who have often contributed to MFW with their tales from the Club’s Farke-era pre-season tours to Germany and other places too.

All profits from this venture go to the admirable Community Sports Foundation [CSF] so I thought this was a reasonable thing to do.

My donation included my own 1990s Mitre N&P goalkeepers top that I’d forgotten I’d bought and never got to wear, an initial printed training top worn by James Vaughan, a vintage unframed Evening News glossy of Hucks and Matty Svensson celebrating a goal and a couple of other bits and bobs.

All of the clan were in situ and our welcome was terrific – quite a few City fans and other curious folks were buzzing around to see what was on offer as well.

Speaking with the Bowles family was interesting so I thought I’d mention a couple of my remembered highlights. Straight away, Jacob asked me who my favourite player is/was, who is my favourite manager and what was my best game of all time.

In answer to the latter I said Bayern away and, being half my age, Jacob quickly countered with City 3, Forest 3. Who was I to disagree?

As for the managers, Jacob mentioned Paul Lambert and I recalled Mike Walker but Sue has never been particularly fond of him so I think we quite rightly settled on Daniel Farke.

In between, they mentioned that my goalkeeper top was particularly rare and they’d only had one in before which they contrived to get Gunny to sign. I wondered how when it was green and black but Mr Bowles senior pointed to the white lining on the collar inside the shirt where Bryan had made his mark on the previous one.

There was then a bit of nitty-gritty from Andy, who asked what I reckoned he might sell the JV top for. I said £50 without the initials and £20 with them to which he and Jacob replied I was probably right as their collective memory of Vaughan was him *falling down* on the touchline and never playing in a City shirt again.

After a quick sarcastic enquiry from me about how Norwich City Council were facilitating the stall, Sharon said they have been *pretty good*. We didn’t take that line of chat any further.

And then Andy got a little bit serious when he told me: “We don’t get enough scarves. They sell out really quickly and we are always looking for new donations”.

I was astounded when he added that the most important current requirement for the stall was bog-standard first-team shirts.

There’s no way I can quote him directly as it wasn’t the time or place for notebook and pencil but he said that some folks can’t or don’t want to lash out fifty quid or whatever for a brand new top every time one is released therefore they are very much in demand so supporters can get a shirt at a reasonable price.

Loyalty doesn’t have to be brand new – I occasionally wear my 1902-2002 double Canary badged blue and light grey to this day. My name’s printed on the front of it near the DPC logo.

While it could appear that this is a pretentious local newspaper advertorial piece it really isn’t. It’s based on a very entertaining 10 minutes or so I enjoyed on Norwich market with three of the nicest, most genuine people you are ever likely to meet. Four if I include Sue [who took the pics].

Bring something along, buy something or just go along for a chat and a shufti.

I can assure you that Andy, Sharon and Jacob will be pleased to see you.

**As a footnote I turned up in my 2013 official training top [see middle pic] and even Jacob couldn’t tell me who “CI” was although he and Andy both reckoned it was probably a member of the backroom team. If anybody knows the answer I’d be fascinated to know.