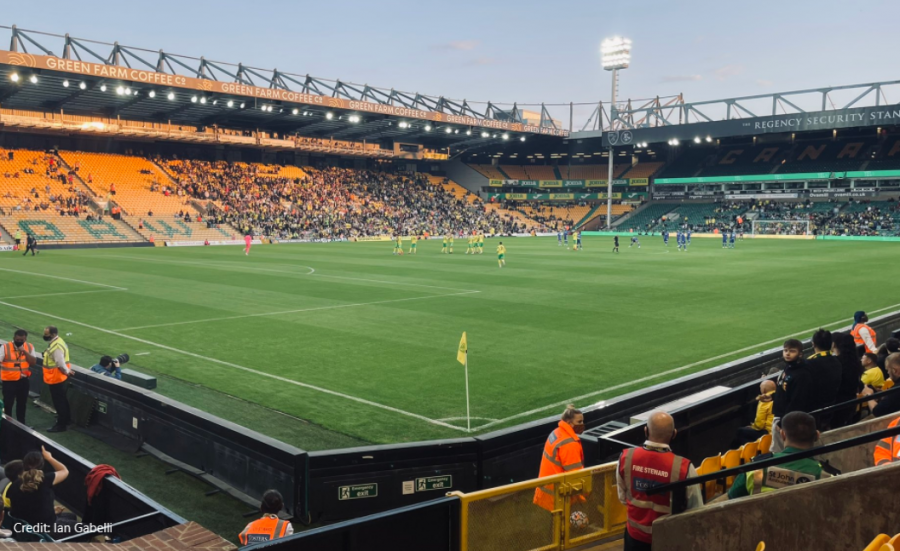 Norwich City’s 2021/22 season already has a sense of theatre about it, the feeling of an era-defining battle in the final of a series of blockbuster films.

The following ten months will define whether the Webber and Farke era is remembered as the greatest in the club’s history or a tale of what could’ve been. As the Canaries welcome Liverpool they begin the biggest Premier League season in their history.

Of course they go in as underdogs because they always do. It wouldn’t be the same loveable yellow and green family if there wasn’t a sense of us against the world. The club’s highest ever league position came in a season before which they were relegation favourites.

Any suggestion that the third-place finish of 1993 could be replicated this term is admittedly delusional, but as one of the division’s lowest spenders and having lost their best player, City currently occupy the same starting place that they did in that hazy summer of Chris Sutton, Jeremy Goss, and new Sky TV deals.

Then it was a strong Arsenal side, this time it’s Liverpool: champions of Europe two years ago, champions of England one year ago, and throwers of a painful ‘welcome to the Premier League’ punch the last time City opened a top-flight campaign.

This set of City players has the opportunity to stand alongside that lauded group of ‘93, to offer this latest regime the substance and tangible success it requires. Daniel Farke’s “beautiful football” has wowed fans, has got the Carrow Road crowd on its feet and the social media fandom purring about this team, but the real prize is Premier League safety.

Lap up the points records, the goals scored, the passing sequences and the flair. Drink in the memory of Championship domination while it still lasts, for promotion is nothing new to Norwich City and that memory won’t take long to fade in the heat of the Premier League battle.

Farke and Stuart Webber may have achieved their promotions in unprecedented style, but as far as on-pitch results, they haven’t even matched the Paul Lambert era yet.

Football is an unforgiving, fickle arena and Webber and Farke will know that their project remains unfinished until the top-flight drop is avoided. If they achieve it, they will have done so in greater style than any other and that sends them straight into the stratosphere of Carrow Road legends.

There’s no question it’ll be tough; even the idea of ceding possession dominance is a foreign one to this team. Ironically, that’s the absolute best strategy against a Liverpool side that loves to attack space in behind.

The return of Virgil van Dijk does offer them an added dimension on the ball, his pinpoint diagonals painfully conspicuous by their absence as the Reds limped into the Champions League group stage last season. Still, they’d prefer to counter and press, to harass City into mistakes in the same way that they did in 2019.

The good news for Farke is that he doesn’t have to play into their hands anymore. His new, quicker Canaries are more capable of counter-attacking than they ever have been under the German. Dimitris Giannoulis and Milot Rashica are useful, pacey out-balls that can hurt Liverpool when the Reds’ attacking full-backs expose them at the back.

Long gone is the technically strong yet ponderous three of Cantwell, Stiepermann and Buendia and replacing it is the more dynamic Rashica along with Kieran Dowell, who loves to operate in space, and will be keen to prove his worth as an ex-Evertonian.

Andy Robertson will be missing for the visitors after suffering a hefty blow in pre-season, while teammates van Dijk and Joe Gomez look set to return from long-term knee injuries.

“It looks like (they’re in contention to start),” Klopp said of the defensive pair, “but how it is with these kinds of things, we have nothing to rush in this department.

Young midfielder Curtis Jones also misses out for the Reds, having suffered a concussion.

New signing Christos Tzolis will be available for the home side, as will Josh Sargent, who joined the club for around £8million this week.

Sargent could be joined by Rashica, who played with him at former club Werder Bremen and has exited isolation along with Grant Hanley, Bali Mumba, Jordan Hugill, Onel Hernandez and Michael McGovern.

Przemyslaw Placheta is still struggling with symptoms of Covid-19, however, and will miss the game, although the Pole is no longer returning positive tests. He’ll be joined on the sidelines by Sam Byram, who has struggled with long-term injuries since City’s last meeting with Liverpool in February 2020.

Andrew Omobamidele has suffered from tonsillitis this week and is a doubt, while fears over Cantwell’s fitness have been allayed after he missed the Canaries’ final warm-up game against Newcastle United.