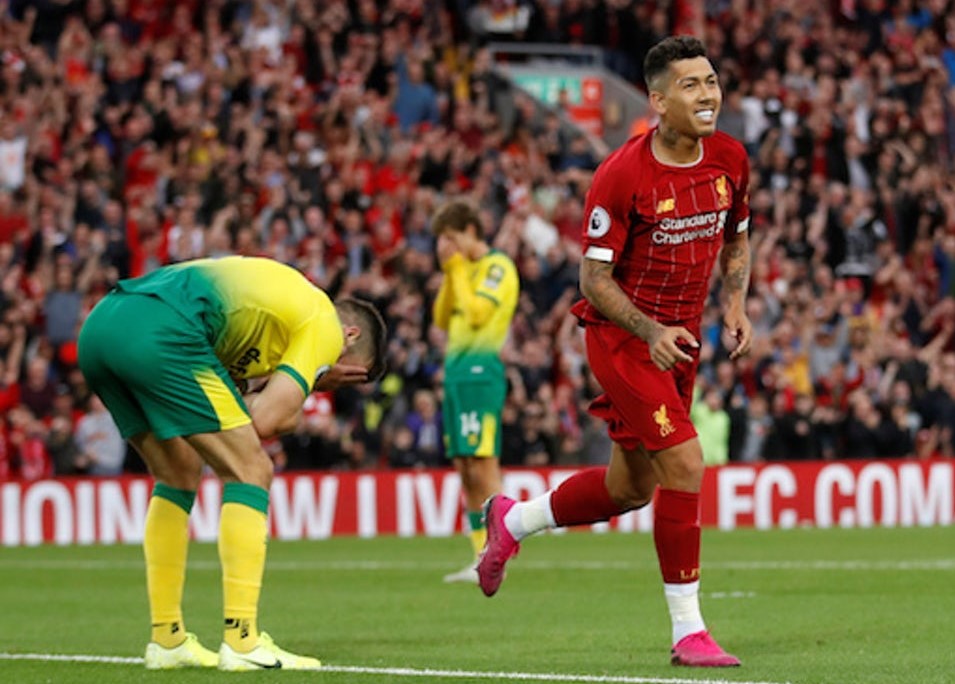 Concocting the first MFW preview of yet another [ha!] season in the Premier League for Norwich City has fallen to me and I must admit that the prospect of our facing the mighty Liverpool at Carrow Road on Saturday would normally fill me with awe, dread and no small portion of trepidation.

But for all of us, whoever we support and wherever we live, *we are back* in stadia and that’s what really counts this weekend.

I had the privilege to speak once more with the admirable Tony Evans, who is a columnist for The Independent, a former Football Editor of The Times, a contributor to talkSPORT and Five Live and is heavily involved with the excellent Reds website The Anfield Wrap. He was also in an early version of Liverpool-supporting band The Farm of All Together Now fame in which he played trumpet and trombone.

How do you personally feel about everybody coming together again then, Tony?

Ecstatic is the word. But ecstatic with caution if that’s possible! Each of us has a responsibility to their fellow supporters at the best of times but that is particularly important in the here and now. [I couldn’t agree more – Martin]

After so long a wait surely you would have preferred the first match of the season to have been at Anfield?

In some ways yes, but you were the Man City of the Championship – many people would agree on that – and Carrow Road is a tight little ground with a great atmosphere so if we must start away why not at your place? You’re much more comfortable in your own environment which will make it a much better contest. I’m past the stage of wanting to see us thrash teams every week – a real test and a close contest is much more my thing these days. I won’t be there myself because I’m working at Stamford Bridge to cover the Chelsea-Palace match but I’ll get behind a TV screen as soon as is practicable afterwards to watch as much of the game as I can.

I guess you were pleased with your 10-game run [eight wins, two draws] a the end of last season that clinched a late Champions League spot?

It looked a difficult task in early February but with a lot of fortitude and a little bit of good luck we got there in the end. I must say that we’ll be all the better for that this season.

Moving on to the playing side of things your talismanic defender Virgil van Dijk seems fully fit and raring to go. I know how highly you rate him so what does his return mean for the Reds?

He’s a super centre-back and the best player we’ve had in years; simple as, really. He’s such a calming presence in the team and it’s not just those spectacular diagonal passes out from the back either. When he was out we sorely missed him and this had a bit of a domino effect, starting at the back and transferring onto our midfield. Now he’s back my real concern is: will he be back to his previous level? Reds fans will be hoping so but I must admit I’m a bit concerned that he doesn’t pick up another injury. On a positive note, his presence will surely help us get back to the collective levels we achieved the season before last.

Of course, you’ll be missing your excellent left-back Andy Robertson on Saturday through injury. How will that affect you?

Not so much defensively as Kostas Tsimikas has done a pretty good job in pre-season and has learned a lot from Robertson but as we’ve said before the fullbacks pushing forward is the key to the way Liverpool play. Daniel Farke, who seems to be quite good at nullifying perceived threats will have to find a way to disrupt this. The opposition know they have to stop them – but can they? Tsimikas and Trent Alexander-Arnold will be a huge test for your full-backs [presumably Max Aarons and Dimitris Giannoulis – Martin].

I bet I can predict your front three for Saturday, Tony. Mo Salah, Sadio Mane and Bobby Firmino. Would I be right?

Yes Martin you would. Firmino is one of those players who thrives in front of a crowd and he’ll be looking forward to it. He’s such an asset to us in every sense as he puts in a lot of hard yards that some people don’t always notice as well as his obvious skill that everybody does notice!

We ended our chat with me asking the obvious: how did Tony think we would fare this season?

I think you’ll more than hold your own, to be honest. You play great football under Farke and on a personal level, I’m glad you’re back. It’s not impossible that all three promoted sides might survive as Crystal Palace are in dire straits, Brighton [who have lost Ben White to Arsenal – Martin] and there are a couple of others who could struggle too – Burnley for one and as you suggest, maybe Newcastle too.

And finally, give us a score guess mate?

Well there are goals in this game for sure [I was only too happy to butt in to wryly confirm that I thought there would be too – Martin] and I reckon 3-2 but I’m not prepared to say which way. I know what I’m hoping for of course!

A huge MFW thanks to the inimitable Tony Evans and I’m sure we’ll speak again before the return fixture in February.