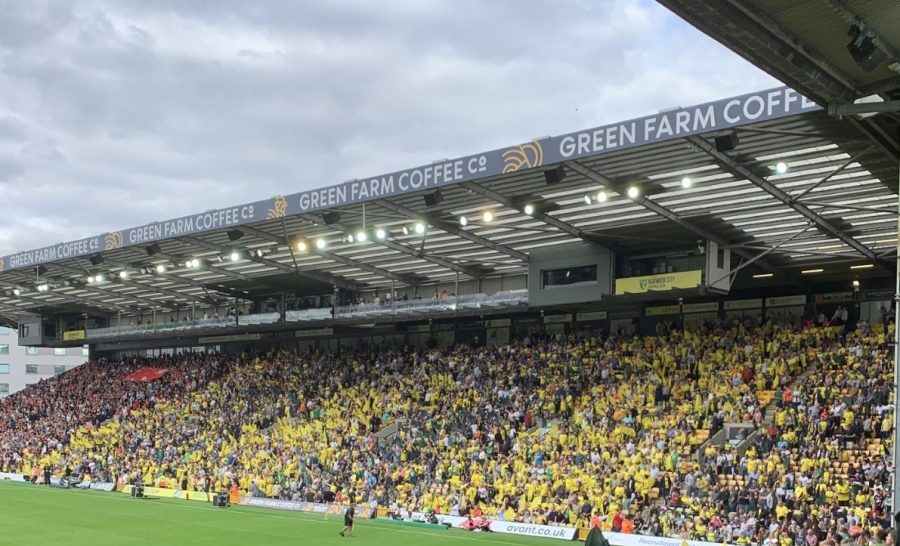 Well, it wasn’t the homecoming we’d all dreamt of, but it was the one most expected. A City squad whose pre-season had been ruined by the infiltration of Covid leading to cancelled friendlies and eleven members of the squad undergoing periods of isolation versus the might of Liverpool whose preparations had been almost perfect.

What did we expect?

Chuck into that mix a Liverpool team that’s been together for several seasons with only the most minor of tweaks versus a City side that included three debutants, and you get a mismatch of scary proportions.

That City emerged from it with confidence and belief still intact and with some good moments to look back is to their credit and sets us up nicely for what lies ahead… starting perhaps *after* next Saturday.

But yesterday wasn’t just about the 92 minutes of football. In many ways, that felt like a sideshow to something far more important.

Those ten minutes before kick-off and the roar that greeted Grant Hanley and his men as they entered the arena was something quite special. A memory to last a lifetime. At that point, it felt almost a shame that there was about to be a game of football that might spoil it.

But there was nothing that Liverpool could do to take away that feeling. As a River End neighbour so eloquently put it, it felt like an age since we had last been together yet also like yesterday.

It was wonderful, and not just for those who were there. Absent friends and those who follow City from afar too were hopefully able to soak up the atmosphere that only a bouncing Carrow Road can create.

You can keep your reds and blues. There’s nothing like a sea of yellow and green to get the pulse racing. Yesterday was the most perfect example.

But when the football did finally kick in there was still more than enough to keep the faithful fully engaged.

For the opening 25 minutes, we matched Liverpool, bettered them even, and it was heartening to see the three debutants – Billy Gilmour, Pierre Lees-Melou and Milot Rashica – all contribute fully, even if it did need the Frenchman and the Kosovan to find a second wind before adjusting to the frenetic pace of the Premier League.

All three did enough over the 92 minutes to suggest that they are going to help make us better. Josh Sargent too in his 15-minute cameo had some good moments; enough to show us that maybe he’ll offer the competition to Teemu Pukki that was clearly absent two seasons ago.

Liverpool are a good side though – that much we already knew – and with Virgil van Dijk now back are immediately a better team than they were last season. They play with a swagger and nonchalance only matched by Andre Marinner’s refereeing style and take comfort in possession to a new level, with van Dijk’s ability to ping a diagonal onto the instep of Trent Alexander-Arnold a weapon in its own right.

Even a fully fit, well-prepared City side would have been hard-pressed to live with the Reds as they went through the gears, so for two of the three goals to be fortuitous and partly of our own making left Team Farke with something to work with. Even the third, an admittedly wonderful strike from Salah, stemmed from a rick from Rees-Melou, followed by another from Ben Gibson.

So, while there was mitigation aplenty, there is still work to be done, not least to address our ongoing propensity to concede goals out of nothing in the top division. Alan Shearer, on Match of the Day, was probably right to point out the need to get back in our defensive shape quicker when in transition but it still needs the mis-controls and the mid-judgments to be eliminated.

Tired bodies and minds may have been factors yesterday but going forward we have to be harder to play against and to score against if we are to survive. That’s a must. So too is the arrival of an Oliver Skipp-type defensive midfielder to help plug those gaps so exposed by Sadio Mane and co yesterday.

But it would be unfair to criticise any individuals after yesterday’s sterling effort and amidst it all there were some extraordinary performances, not least from our captain who, let’s not forget, has not had a single minute of game time in pre-season. For Hanley to produce a display of that ilk in those circumstances says everything about the man.

Another to shine in an equally tricky setting was Dimitris Giannoulis who, tasked with shackling Salah, produced one of his best performances in a City shirt, both in his own defensive third and when linking up with Rashica going forward. If that was a sign of things to come then it was a positive one.

Yesterday was about far more than that.