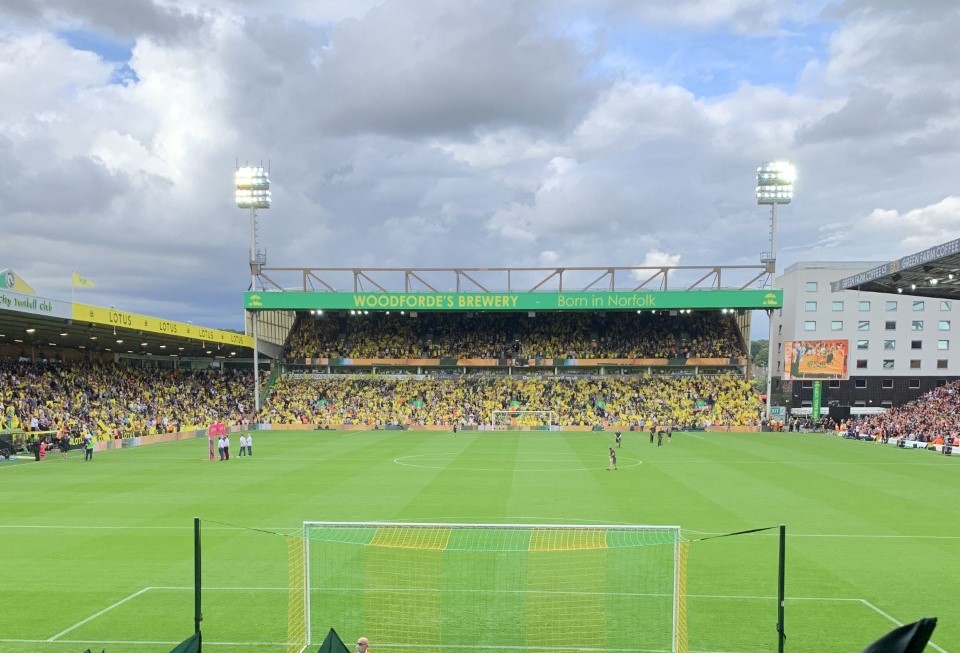 City’s Premier League campaign got off to a disappointing, if not unexpected, start, losing 3-0 to Liverpool at Carrow Road.

Goals from Diogo Jota, Roberto Firmino and Mohammed Salah earned the Reds three points at a packed Carrow Road, as City fans piled into a full-capacity stadium for the first time in nearly 18 months.

The Canaries started well, dominating possession and calmly playing the ball out from Tim Krul. Ben Gibson’s aerial dominance was encouraging in the face of Virgil van Dijk’s trademark diagonal passes, and Milot Rashica gave a clear impression of what he was about.

Typically, however, the favourites had the first real chance of the game. Kostas Tsimikas’ corner was cleared as far as Naby Keita, whose cross was met firmly by Jota. Krul tipped the ball over well.

Shortly afterwards Trent Alexander-Arnold cut the ball back to Mo Salah, who found rare space in the City area and shifted on to his right foot, seeing his firm drive held.

Soon Daniel Farke’s side had a chance of their own. A refreshingly bulging Carrow Road held its breath for what felt like minutes as Teemu Pukki ran on to Todd Cantwell’s through ball, but the Finn blasted towards Alisson, who defended his near post well.

Calls for Norwich fans to produce an electric atmosphere commonly referenced the incredible noise created when Manchester City last visited NR1, and when a corner resulted from Pukki’s chance there was a similarity in the air to Kenny McLean’s opener in September 2019. Lukas Rupp did his best to force the moment, but his volley dipped slightly too late to make it so.

Salah then gave a warning of what was to come, as Liverpool grew into the game and began to pepper the City goal. The Egyptian fired a volley just wide from 15 yards.

Four minutes later, the Reds opened the scoring. Salah’s touch fell fortuitously to Jota, who smashed straight through Krul. The Dutch international will be unhappy with quite how easily the Liverpool number 20’s strike slipped through him.

After 34 minutes the lead could easily have been doubled, although Pierre Lees-Melou’s vital double block prevented Salah and Joel Matip from adding a second. The Frenchman had a mixed game and struggled to reproduce the class and elegance he showed in pre-season when pressed ferociously by Jurgen Klopp’s side, but did well in the air and ran all game long.

Despite the onslaught, City still had a chance with ten minutes to go until the break. They still led the possession game, and had shown elements of danger in the Liverpool half. As the Merseysiders emerged from the changing room, however, they set about extinguishing any remaining hope.

Sadio Mane’s goal-bound effort was blocked with Krul nowhere to be seen, and Trent Alexander-Arnold’s free-kick dropped just wide, as the Canaries were hemmed in more and more.

They briefly broke out – threatening mainly through the excellent Dimitris Giannoulis, who allayed any fears over his defensive abilities by coping well with Salah when the Egyptian was his responsibility – but Liverpool’s second goal finished the game off after 65 minutes.

The Reds broke forward on the counter-attack, Mane’s effort deflected into Salah’s path. Salah squared for substitute Firmino to tap through Krul’s legs.

It had been a strong performance from Billy Gilmour, whose talent and poise on the ball was undeniable, but the Scot’s lax tracking for the goal highlighted why he’s not the Oliver Skipp replacement many had hoped he’d be.

At this stage, Farke’s Achilles heel reared its ugly head. The German’s depleted side, tired after a Covid-19 outbreak that impacted a huge proportion of the squad, desperately needed fresh legs but received none until the 77th minute when new signing Josh Sargent made his debut alongside Adam Idah.

The scoreline had been worsened by then, Salah dispatching his first of the season. The Canaries defended sturdily from set-pieces all night but left themselves vulnerable to dangerous second balls. Liverpool’s number 11 produced the perfect example of this, controlling Gibson’s header before curling beyond Krul.

The Teessider then had a chance to score a consolation goal but a mixture of poor finishing and unbelievable goalkeeping denied him. Lees-Melou whipped the ball in, Gibson controlling and smashing towards goal from four yards before Allison stretched to keep a clean sheet, seeing out a late flurry from the Canaries as the away side ran away comfortable winners.