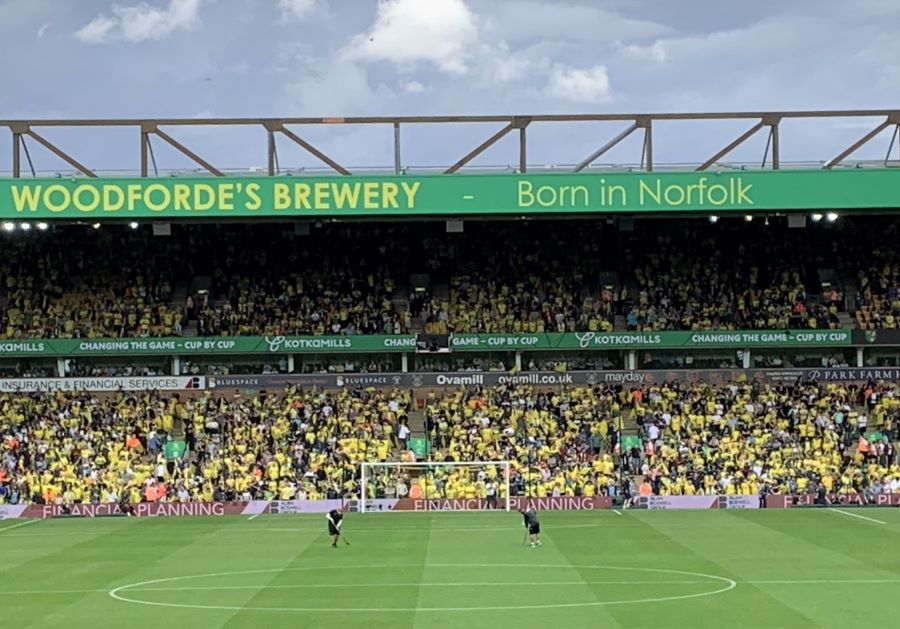 A journey of 10,000 miles starts with a single step according to Mao Tse-Tung. My trip to Carrow Road on Saturday was about 9,998 miles short of that but nonetheless memorable. At 63 years of age, I’m surely far too old to get butterflies in the abdomen region – or so I thought.

Mrs P dropped me off at Chalk Hill Road after going through traffic in which every other car seemed full of folks in yellow and green. Quickly entering Riverside, I fell in with a guy I vaguely know and he and his mob were singing anti-1p5wich songs. It would have been rude not to join in, so the inner child appeared for a few moments and thoroughly enjoyed himself.

Part of my matchday ritual always includes a trip to Morrisons to buy a few packs of my favourite hard-to-find cigars and a bottle of something naughty to enjoy before the game. When I emerged I bumped into a couple of Scousers who were doing likewise with bottles of Hooch and we all exploded with laughter in a kind of *you too* sort of way.

We had a good old chinwag and they said they’d expected the Compleat Angler to be open for away fans but didn’t know where else to go when they were turned away. After telling me they were going to win 3-1 [close but not worthy of one of my cigars] I casually asked if they knew of Tony Evans who helped MFW with our Liverpool preview. They did and follow Tony’s podcast The Anfield Wrap avidly. Small world.

The short trek across the car park past the vibrant hot dog stall led me to the Barclay service lift which my creaking back likes to use to ascend to Upper D block. No way Manuel, the queues were unbelievably long so I had to use the stairs for once. A man’s got to do, etc.

Many folks were masked on the concourses, including me, but once inside the Barclay seating area they were universally shoved in pockets, handbags or any other place folks chose to stash them.

After a short breather, it was my first sight of L 0091 in what seemed like a lifetime but the emotion vanished as soon as it came – the place was heaving and I got to see some footy mates for the first time in a very long while.

Mystic Kev of MFW commenting fame, Alan the Postie and possibly the most amusing trio you will ever sit in front of at any football ground anywhere in the world, as in Rob, Steve and Michael.

Steve unfailingly makes me laugh and is a very useful source of Test Cricket updates as I don’t have the gift of concentrating on the game with a mobile on while he is a past master at it. How it originally developed I don’t know but every time I take my seat he bellows *sit down* and I respond with *shut up* which always makes the folks around us chuckle.

I also learned a secret about Rob. Once a Roundhead, he is now a Cavalier – no sniggering at the back, please.

The last time I saw him he was a proud pikeman in Sir Thomas Lunsford’s Regiment, a prominent Norfolk-based English Civil War re-enactment group. But for some obscure reason, he’s jumped ship and decided Charles I had some merit after all.

Or gets to wear a flashier costume, perhaps.

Out came the flags, which we all had far more fun with than grown adults surely should, and then Andre Marriner blew his whistle and away we went. It was terrific to be back amongst the banter, it really was.

Samuel and Gary have covered the match for MFW comprehensively over the weekend so I’m only going to blandly say that we did okay. We obviously tired under the circumstances but it’s early days for sure and I think I’m starting to fall in love with Dimitris Giannoulis. My man of the match by far. And to share possession 50/50 with Liverpool is no mean achievement despite their having both the good fortune and the goals. The pitch was pristine.

I left shortly after the third goal. Not in the sense of swapping the yellow flag for the white one but my usual taxi firm for the journey home had warned me they were extremely busy [okay they’re understandably short on drivers just now too] and the closer to 1930 I could get the less likely I’d have to wait for an hour or so.

I made it to their base just in time to get the last carriage out of town for quite a while but that brought with it a huge slice of irony. The cab driver was a lifelong Brentford fan and spent the 15-minute journey extolling the virtues of Ivan Toney. Despite my inner feelings concerning his demonstrable lack of tact I still gave him a decent tip, but I’ve had better conversations with cabbies I can assure you.

**If anybody thinks this piece is a bit like the writings/ramblings of one Clement Scott Cromer Dictionary: Clement Scott 100 or so years ago you might have a point.

But although we lost it was the most fantastic evening out and I can honestly say this: