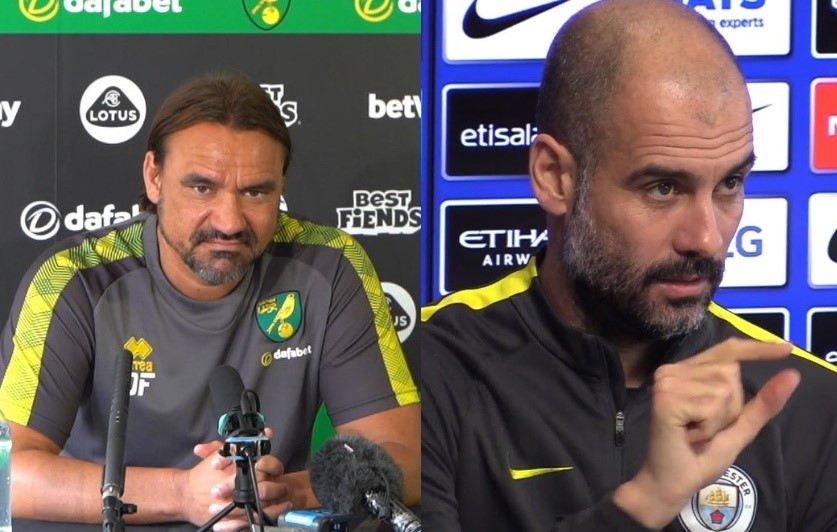 Friends Pep Guardiola and Daniel Farke were keen to praise each other’s work in their pre-match press conferences but asserted that it’s business as usual come 3pm tomorrow.

“Daniel is an exceptional manager,” said Guardiola of his Norfolk counterpart. “I enjoy a lot watching his teams play. They have the quality and this is a team that is going to try to play. We are going to face a really good team, their proposal is always so interesting.”

In a cagey press conference that lasted only a few minutes, the Citizens boss gave the impression of a man focused on bouncing back after his side’s 1-0 defeat to Tottenham last Sunday. Guardiola may be without key man Kevin De Bruyne, however.

The Belgian did not train today and is a doubt for tomorrow’s game after a summer punctuated by injury problems. He’ll be joined on the sidelines by teammate Phil Foden and Norwich’s Przemyslaw Placheta, who is still suffering from the effects of Covid-19.

Long-term absentee Sam Byram is also unavailable for the visitors despite returning to the training pitch.

Farke joined Guardiola in praising his upcoming adversary, saying: “I really like [Guardiola] as a human being. As a coach he is a legend.

The German was realistic about the strength of his opposition but claimed that detailed preparation was the way to approach such a task. “My players are not stupid,” he said, “they will know who they are facing.

“I don’t believe in hiding behind these facts. They know they are facing a world-class side. I think the best way is to be analytical. We will speak about their strengths. The times as a coach you say: ‘We won’t worry about them, we just concentrate on ourselves’, those times are gone. The players want information, but it is about finding that balance.”

Farke is counting on the support of a “little yellow wall” in Manchester, as he attempts to achieve the nearly impossible for the second time in three years. The Canaries’ loyal fan base will undoubtedly provide that and, as always in football, there will be a glimmer of hope for those making the trip up North.