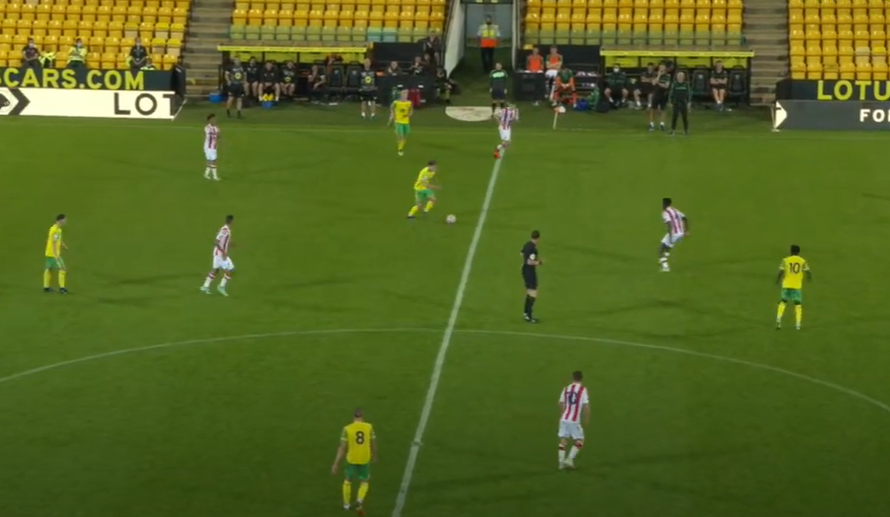 Eddy Jones’ strike stole the three points for the visitors, while Norwich fans were treated to their first glimpse of new signing Liam Gibbs in competitive action and striker Shae Hutchinson made a return from his second kidney transplant surgery to complete 45 minutes of Premier League 2 action.

Alan Neilson’s development side started the better team but ceded the first chance to the Potters, Tom Sparrow firing towards goal from the edge of the box but seeing his effort held well by home ‘keeper Joe Rose.

Rose’s counterpart didn’t have to wait long before his first involvement. A minute later Abu Kamara, fresh from an opening day hat-trick at Southampton last week, turned excellently before curling towards goal. Nathan Broome got down well to tip around his far post.

Broome came rushing out when the same man had Norwich’s second and best chance of the game but wasn’t required as Kamara rolled just wide one-on-one.

The Canaries’ dominance grew as the half wore on but stopped dead in its tracks when Jones found a shock goal. A free-kick was awarded to the right of the area and the left-back stepped up to curl his cross-shot beyond Rose.

Norwich went into the break baffled at the fact that they were losing along with a further issue Gibbs described in his post-match interviews. “First half we were really dominant,” the 18-year-old said, “then they changed shape and caused us a few problems, our press wasn’t as effective. But definitely a lot of positives to take.”

The momentum had shifted and after two good chances on the brink of half-time, the Potters grew in dominance at the start of the second half.

The Canaries pushed hard to find an equaliser, however, and Tony Springett created a half-chance for himself minutes after Kamara had done the same.

Tom Dickson-Peters had replaced Hutchinson at for the second 45 and made his mark for the first time in the 61st -minute when he placed just wide from the edge of the box.

Excellent wing play from Josh Giurgi- who has typically played further forward but has started this season’s opening two games at right-back- then earned Kamara a headed chance but his effort was lacking in power and was held comfortably.

The away side had one chance to seal the three points in the 81st-minute but excellent defending by Giurgi denied Christian Norton’s acrobatic effort from seven yards.

Norwich huffed and puffed but couldn’t create a clear chance to take the point they comfortably deserved, losing out to a typical smash-and-grab effort.

Southend fans to protest after chairman's statement amid fears for club's future - https://fanbanter.co.uk/southend-fans-to-protest-after-being-unassured-by-chairmans-statement-amid-fears-for-clubs-future/

If both him and Lewis O’Brien are available to get on loan and we somehow get them, I may start thinking about Wembley. #ncfc

If he's remotely available for loan in January, this is the guy we should be after. Instant upgrade
#NCFC

So @MikeAttanasio and his dad Mark are gonna basically *Almost* own the club ? #ncfc