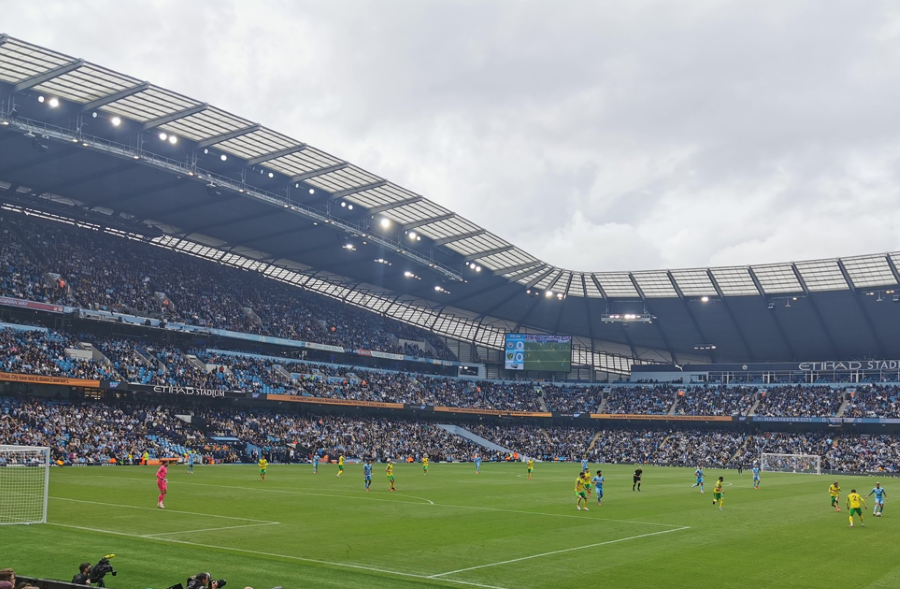 Pep Guardiola’s Manchester City may be known for their movement, patience and technical quality, but they’re also the Premier League’s most precise and calculated foulers. It’s an approach Norwich would do well to learn from.

There were plenty of predictable statistics to illustrate quite how dominant Manchester City were over Norwich on Saturday afternoon. Possession was high for the Citizens, as were shots on target and, most importantly, goals.

A pattern that wasn’t expected from a dominant thrashing, however, was how many more fouls the winners made than their submissive opposition. The home side produced 13 fouls to the Canaries’ 7, meaning that they made a foul every 2.4 minutes Norwich spent in possession. Farke’s side only fouled City’s players once for every 9 minutes they spent on the ball.

Not only did this expose the visitors’ subservience, their willingness to allow the man in possession as much space and time as he required, but it also highlighted a lack of the tactical cynicism common and essential in the Premier League.

While the time-wasting and persistent disruption of a team like Burnley may well serve to justify Farke’s methods, helping portray his City as ‘the good guys’, a team that most want to support, Guardiola’s men showed that they can play the world’s most attractive football and still incorporate persistent fouls that cut off counter-attacks and stem the flow of chances created by the opposition.

This is illustrated by a map of where the fouls were committed. Here are Manchester City’s 13, mapped out (attacking the right-hand goal).

And here is a map of Norwich’s 7 fouls (attacking the left-hand goal).

Manchester City’s fouls were largely committed high up the pitch, 77 percent of them coming in the Norwich half.

This has two functions: to stop counter-attacks at source, ensuring that any free-kicks conceded are in safe areas; and avoiding yellow cards because the attack isn’t yet dangerous enough to justify a booking. The spreading out of fouls between the team also serves this purpose (eight different players made fouls but none more than twice).

The Canaries may be open to an attack-haltering foul but are not well prepared enough to spot the danger and commit this foul before the counter develops. Grant Hanley’s yellow card in the 66th minute of this game, when he cynically chopped the opposition down, did stop the counter but resulted in a booking for the skipper given Manchester City were bearing down on goal with one more pass.

It’s the ruthless edge shown clinically by the Sky Blues and clearly missing in City’s game on Saturday that currently separates the Canaries and the rest of the Premier League.

Like it or not, Norwich adding fuel to the ‘too nice’ fire repeatedly stoked by their critics, and this is a problem that looked like it had gone away after a season of epitomising the cliché in 2019/20.

The same mitigations applied to those results as the matches City have already played in 2021/22. It was a new season, a new team, without Emi Buendia for that trip to the John Smith’s Stadium. Pre-season had been less than ideal in that late summer of 2020 as it has been this year.

Admittedly, the quality of the opposition has improved since that run of hard-earned points but the desire present then appeared to be lacking at the Etihad on Saturday.

The Foxes will of course be the favourites when they head to Carrow Road for the Canaries’ third league game, as will Arsenal the week after that and even Watford the week after that, but if City can find their rough edge and recruit the required players in the short time left to do so they will stand a significant chance.

There is time for the beautiful football to flow, but first Norwich must rediscover their ruthless side, perhaps drawing inspiration from their unbelievably ruthless opponents.