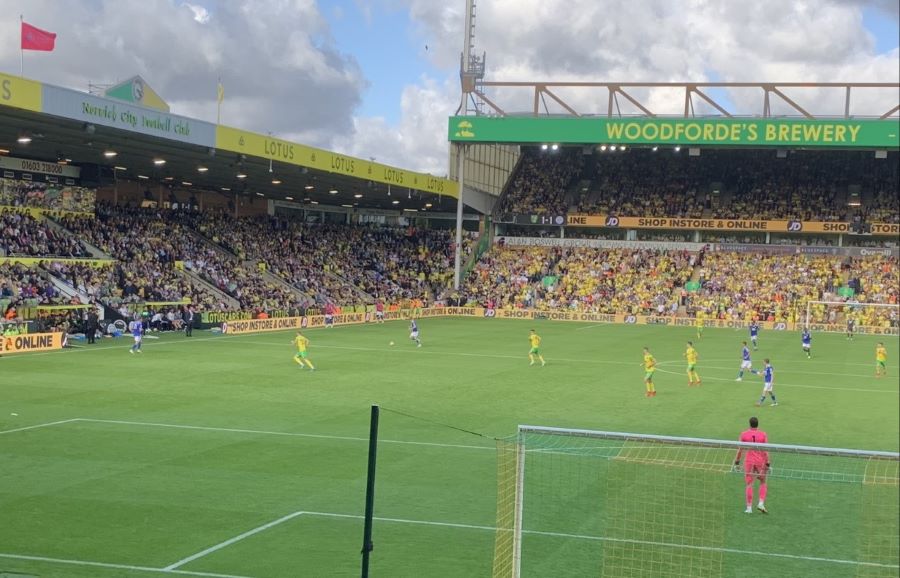 As Todd Cantwell said afterwards, it would have been disappointing to have come away with a point but, of course, we would definitely have taken it. To have ended up with nothing was a proper blow to the nether regions. The longer we go without those first points, or point, on the board the more anxious it becomes.

Yes, there were plenty of positives and we ran a team with top-six aspirations close, but for reasons of our own making, we departed again with absolutely nothing. That walk back to the car felt so familiar. That feeling of being decent and valiant but still losers.

Because for all of the good things that were evident, and there were plenty, that habit of conceding soft goals will never not be a problem. Not in the Premier League.

The good news is that reinforcements appear to be on their way in the form of two new signings and we have to pray that Stuart Webber is able to bring in an Oliver Skipp replacement before 11 pm on Tuesday. Without that player, with a natural instinct to sniff out danger and the required discipline to plug those gaps in from of our back-four, this could be another long season.

But with that player and, hopefully, an experienced centre-back to add cover in that area, there looks to be the makings of a team that could be competitive at this level.

We have to learn quickly though and we have to hope that any new faces in said areas are able to do precisely what they say on the tin. Right now it feels just a little fragile and already, three games in and with no points, we desperately need any new faces to hit the ground running rather than take a few games to adjust.

The defensive sloppiness that blighted the 2019-20 campaign has gone nowhere and while Daniel Farke was happy to put yesterday’s goals against down to the naivety of his two young loanees, there is still a general unease when we lose the ball high up the pitch; a propensity to find ourselves overloaded and outnumbered with a bit too much ease.

It looks and feels familiar because it is. All too often we just come out the wrong side of these very tight games, and we know how that ends.

The flip side is that Leicester, a team with top-four ambitions, were made to work bloody hard for their win and when we did have the ball we looked like a team that can create problems for others. And, in fairness, for spells against Liverpool, we did the same.

And while Teemu Pukki may personally be missing the creativity of that little Argentinian whose name I’m loathed to keep mentioning, as a unit, so far, we have managed to create a few chances. That, in itself, is encouraging and if we can get Billy Gilmour slightly higher up the pitch rather than ask him to do a job for which he’s clearly not an unnatural fit, then that too will add something extra in the attacking third.

There are signs too that the new signings are going to make us better. While we will have to wait a bit longer to see Christos Tzolis light up the Premier League, Milot Rashica has done enough in three games to suggest he will be able to replicate those impressive YouTube clips when he’s fully versed in the nuances of Farkeball.

What Rashica does possess, and which will stand him in good stead going forward, is that low centre of gravity that makes him hard to lever off the ball. Tzolis too looks of a similar stature and in that regard, Webber has delivered on his promise to make us more athletic and powerful.

The final piece of that particular jigsaw would be an imposing Wilfried Ndidi type figure as ballast in the centre of that midfield. Here’s hoping…

It’s impossible to discuss yesterday’s game without touching on VAR and without which, I guess, we would have lost 2-0, instead of 2-1.

The five minutes it took for Stockley Park and Robert Jones to decide it was a penalty seemed overly long considering how cut and dried it looked even at first glance – I suppose they got there in the end – but for the disallowed goal, what happened to the wider lines that I understood were being used to eradicate the toenail/armpit decisions?

Has that edict changed?

Finally, before I go, I took a proper pasting on Twitter last night for questioning why we gave the departing James Maddison such an ovation when he was hooked by Brendan Rodgers. Having watched him niggle, feign and chunter for 86 minutes, while also doing his best to get in Pukki’s ear ahead of him taking the penalty, I was genuinely struggling to see why we would do that.

Yes he was, and still is, a brilliant footballer and, yes, his sale did effectively save the club from a financial crisis – I get that – but there was no personal sacrifice involved on Maddison’s part. Out of it, he got a lucrative move to a really good football club.

It just struck me as odd that his ovation, in the circumstances, was akin to a departing Norwich player.

But anyway, three down, 35 to go. The sooner that first point arrives the better.