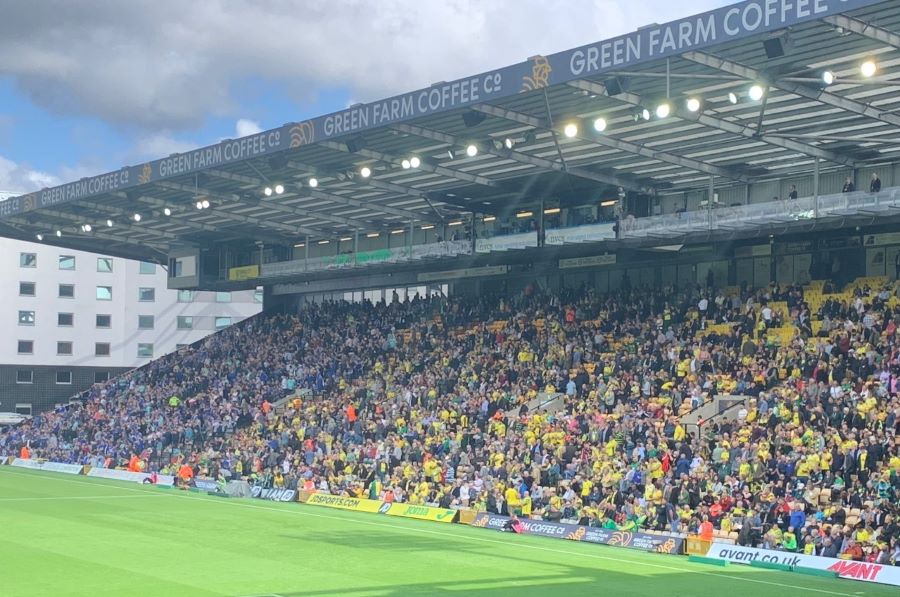 Who’d have thought it? As we go into the international break we are above Arsenal in the Premier League table. Oh joy, you might think, until you actually take a quick shufti at said, sad table. And who do we face after the break? Arsenal at the Emirates of course.

But with all thoughts of early-season relegation zone six-pointers cast aside, I wonder if we actually were a little bit unlucky against an admittedly injury-hit Leicester City on Saturday.

There were two controversial VAR decisions during the game as we all well know by now. Did VAR get both decisions right? I reckon it probably did but from my perch in the Barclay I had a less than clear view of either of them in real-time.

When Pierre Lees-Melou went down under a clumsy [and unnecessary] challenge from Caglar Soyuncu I was 120 yards away and 50/50 between a penalty and a dive. TV replays later showed I should have gone for the penalty. Teemu Pukki waited for what seemed like all eternity before calmly sending Kasper Schmeichel the wrong way from the spot. Justice done? Yes, in this case, I think so.

As for the second incident, it had Daniel Farke mildly fuming afterwards. It initially appeared a goal as Milot Rashica took a corner, Kenny McLean leapt like a Loch Fyne salmon and we were deservedly back in it at 2-2. However, I have always had the nervous habit of looking across to the assistant if a close-range goal is scored from a corner or free-kick. Flag straight up. But why?

From behind the Barclay goal, it was impossible to see Cantwell in front of Schmeichel. As Farke says, the Danish keeper is about 10 inches taller than our Todd. I had no idea he was there tbh. Was he taking an active part in play? I’m not sure but VAR decided he was. Benefit of the doubt to Leicester in this case – but if they’d had either full-back on the line as we invariably do, the goal would have stood.

We still could have got the equaliser I feel we deserved. Josh Sargent and Adam Idah both had good chances late on but it wasn’t to be.

Without the need for a TV replay, the way we contrived to let Leicester in twice was all too apparent.

Brandon Williams was caught out naively trying to play out from the back with Ben Gibson and as the cross from Ricardo Peirera came in Jamie Vardy pulled away from a non-existent marker to Give Tim Krul no chance. Leicester’s second came basically from Billy Gilmour going awol, Vardy collecting and laying off to Marc Albrighton whose admittedly fine finish took a slight deflection off the covering Williams, who was a fraction too late to close him down.

I’ll repeat that I think we were worth a draw but we didn’t get it. Muck happens. But as Gary said yesterday, there are some positive points but we need to get a different type of points – and that right quick. With a stuttering and uninspired Arsenal up next followed by Watford, we have a brace of opportunities to do this after the break and we simply have to take one of these chances to open our account.

Gary’s *Skipp-shaped hole* has been filled by last night’s official confirmation of the signing of Norwegian international Mathias Normann from FC Rostov, which I am surprised about as I never felt it would happen. But it did, so it proves that my gut instinct can be fallible

Maybe Alex Tettey had a word on our behalf? I dunno about that either, but it would be rude to rule it out.

Where does that leave Jacob Lungi Sorenson? Only Daniel Farke will know the answer to that.

For those who are lucky enough to be going, I wish you all a great trip to the Emirates after the international break and you never know – we could get our first points of the season in North London, whether Mikel Arteta remains in situ or not.

Let’s hope so because our season now begins on September 11.

* I was reliably [?] informed during the match that referee Robert Jones’ inlaws all originate from Leicestershire. If that’s true I wouldn’t be at all surprised as there is a huge difference between letting the game flow and *missing* obvious fouls and blatant gamesmanship.