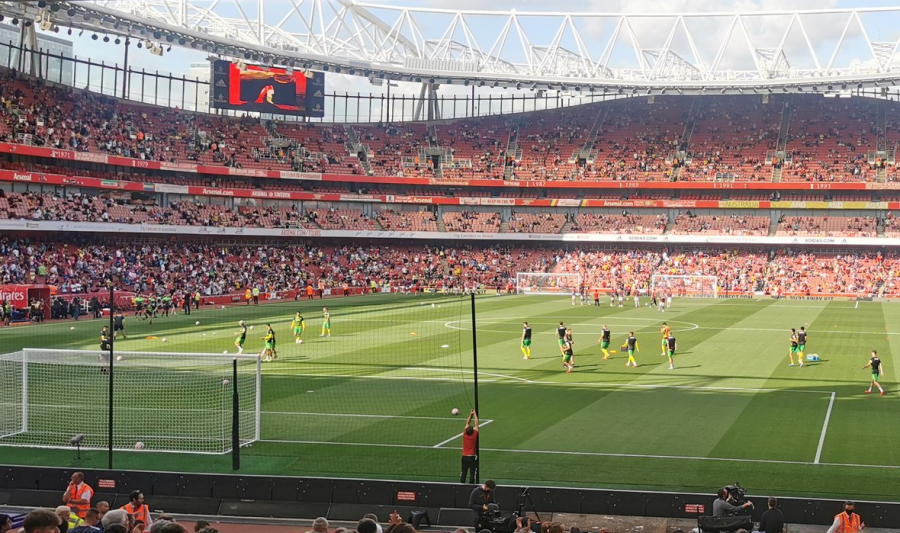 City played well, stood up to the battle, were easy on the eye and looked solid for long periods, but narrowly lost thanks to a bit of bad luck and some questionable defending.

The venue was different, the personnel slightly adjusted (Daniel Farke made four changes to his starting eleven from the 2-1 defeat by Leicester City) and more new additions had arrived, but in the end the headline was the same as City lost 1-0 to Arsenal at the Emirates Stadium: The Canaries played well but came away with nothing.

Summed up perfectly by Farke: “We are disappointed because we are not playing for warm words or for great performances. We are playing for points.

“From minute 20-25 on we were on the front foot, dominated possession, dominated this game, brought the game a lot into Arsenal’s half, created many good situations. Sadly, we missed a little bit this cutting edge in the final third.”

That recurring tale seems to be becoming a staple of the early 2021/22 season as it was in 2019/20; no doubt a worrying parallel for the City boss as he seeks to avoid the same fate as in that dreadful campaign.

Admittedly there were no good performances in the Project Restart era of that campaign, but the opening throes of 2021/22 (excluding their dismal 5-0 loss to Manchester City) bear an eerie resemblance to late 2019, when the Canaries turned in excellent performances against the likes of Wolves, Sheffield United, Tottenham and Arsenal without defeating any of them.

It must, of course, be noted that at this stage nothing is decided, and while the Gunners remain in crisis, their squad far outstrips Farke’s for experience, market value and technical quality. The same can be said for the Canaries’ three prior Premier League opposition.

What City will be keen to avoid is the development of this early trend into a long-term pattern.

As will repeatedly (and perhaps patronisingly) be said in the coming days, there were positives to take from the defeat. Brandon Williams, for example, was excellent both defensively and in his role as a key part of building attacks from the back.

However, one suspects the Manchester United loanee – very used to winning as a habit – will grow tired if he’s often required to repeat his sentiments from the Arsenal defeat.

Williams was composed when required, aggressive when necessary and responsible for the moment which most felt like a symbol of luck changing. When Nicolas Pepe’s close-range effort was superbly blocked on the line by the 21-year-old, it hinted at an end to the trademark lack of fortune for his new club.

What’s most frustrating about that moment, and many like it, is that the closer City came to flipping the script, the more closely the script was adhered to; the Canaries’ hubris highlighted in painful irony.

It had looked for so long like Norwich were turning the tables on Arsenal, only to find themselves dazed and exactly where they have been in the latter stages of most Premier League games under Farke.

There also appears to be no cure. The symptoms have been repeated so often that City’s misfortune is clearly no coincidence, but if the only antidote is game management, experience and nous, there’s very little Farke can do between now and January.

In fact, Stuart Webber’s summer recruitment was designed to improve upon that weakness, adding the experienced Pierre Lees-Melou and Ben Gibson (permanently), but there has been little improvement in that department thus far. Perhaps Mathias Normann is the solution.

City’s new Norwegian was withheld yesterday after a busy international break and very little time to learn his complex role, but Norwich desperately needed somebody to control the tempo of the game, to stem the flow when the time between waves of Arsenal attack grew shorter as the second half wore on. It seems inevitable that Normann will start at Carrow Road against Watford next weekend when a win seems vital already.

And with that sentiment comes nagging Jamal Lewis’ words in a recent interview:

“At Norwich, in the Premier League, it’s like, ‘OK. Cool. Dust ourselves off and go again.’ At Newcastle, it’s like, ‘No, that’s not good enough. We need to do this, this and this’.”