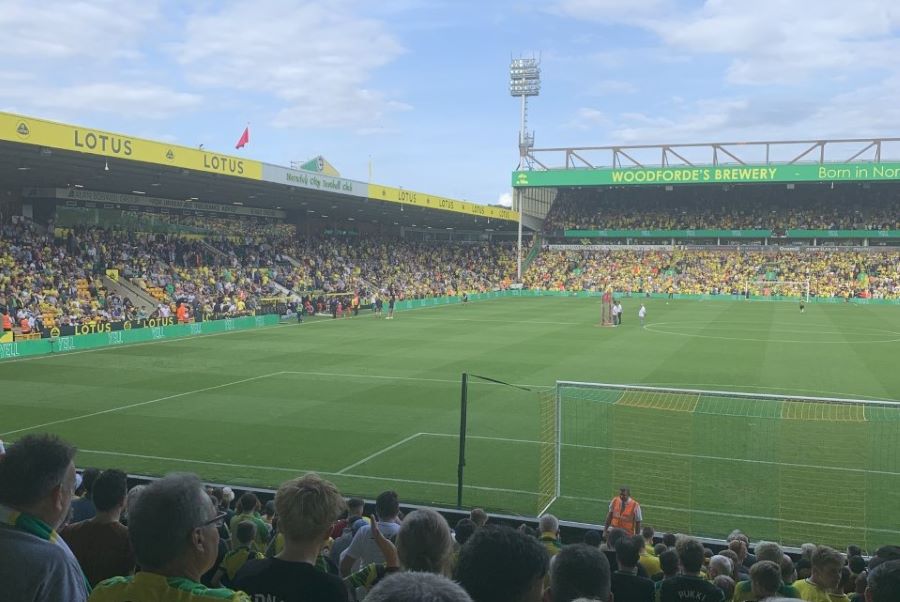 You know things are not going well when you’ve had to give Match of the Day the swerve for five consecutive Saturdays.

Some of you are no doubt braver than I, but Lineker’s half-hearted ‘and Norwich?’ that invariably follows the collective gushing over the qualities of our opponents is too much to take when the pain of defeat is still smarting.

This was supposed to be the game when our season kicked into gear. I was less accepting than some of our first four games being effectively writen-off, but it was clear from the moment the fixtures were released that Watford (h) was the most likely opportunity for our first win.

That we came up so far short was a full-on blow to the nether regions.

We could legitimately argue we were worthy of a point against Leicester and were plucky in defeat against Liverpool, but against a Watford team that looked more streetwise and organised, we were well beaten. Comfortably so.

And not only were the Hornets more streetwise and organised; they were also bigger, faster, stronger and more athletic. They also made far fewer errors.

I wrote in my pre-match piece on Friday that yesterday’s game was going to be a useful barometer of how successful Stuart Webber’s summer overhaul has been in making Daniel Farke’s squad more robust and able to handle the physical demands of the Premier League.

I keep tapping the barometer and the answer is still the same.

Clearly, there are also issues with the shape, formation and permutations of personnel with which Farke has so far tinkered, but until we can cope, particularly in the middle of the pitch, with the hurly-burly of Premier League football then the wins will remain hard to come by.

Right now it’s difficult to see where the first point let alone the first win is coming from.

All the failings that become so apparent when we enter the top tier have gone precisely nowhere.

We’re still a soft touch. We still give away soft goals. We still make individual errors. And we still look powderpuff in the final third.

For as long as all these traits persist, we will remain in 20th.

But it stings even more because looking at the squad, we should be more competitive. We’re not going to be challenging for a top-half finish, nor are we regularly going toe-to-toe with those in the top six, but there looks to be enough quality there to at least give ourselves a fighting chance at winning some games of football, even allowing for the lack of bulk and athleticism.

Right now, that’s all being undermined by us being far too easy to score against.

There were some promising signs and some good moments – all of the new players have shown glimpses of promise – but they’re fitful and there are never enough moments to come together to produce a good, solid, all-round performance.

A few good spells and some promise are not enough to win football matches at this level, not when teams know if they’re patient and solid, that Norwich will make a gaff or two and cough up a golden chance or two.

I’ll not dissect the three Watford goals because we’ll all have seen them but, like the Arsenal goal last Saturday, it wasn’t single individual errors that proved so costly each time. It was a series of errors for each goal.

The Match of the Day pundits, if they could be bothered, will have had a field day, which leads me on nicely to something else that really stings as a result of this atrocious start to the season.

Ever since promotion was secured in April, this club has had to endure jibes, platitudes, jokes and (sometimes) insults based on its propensity to yo-yo, its funding model, its inability to splash cash on a Premier League scale, and the way it chooses to do things differently.

As a result of all of the above, City fans rallied superbly in defence of the club, taking to social media, phone-ins etc to try and correct the misunderstandings and ignorance around our model.

Pundits, experts and national journos were literally queueing up to tell us we’ll be heading back whence we came at the end of this season, but we fought back passionately, attempting to explain, even politely in some instances, that bolstered by the sale of Emi Buendia, we have been spending what, in Norwich City terms, were astronomical sums. This time around it would be different.

Yet everything that was said… the derogatory comments, the jibes, the prophecies of doom… has been played out just as they predicted. Even the spinniest of spin doctors would struggle to drag a positive message out of a record that reads W0-D0-L5 with a goal difference of -12.

Of course, the season is only five games old and there is still time to prove all of the doom-mongers wrong, but as things stand we have not a single item of ammunition with which to return fire. The stirring and passionate defence of our model looks right now to be nothing more than bravado. No actions have yet emerged to back up those words.

For Daniel Farke, there is one massive week ahead at Colney. The Carabao Cup game against Liverpool may be a pleasant, even winnable, diversion from their league travails – depending on the strength of Klopp’s XI – but to garner a positive collective mindset off the back of yesterday is a huge challenge all of its own.

Five defeats on the spin at the start of a new season take some recovering from. There has been no promotion ‘bounce’ in Norfolk. Only in west London and Hertfordshire.

So where from here?

Well, Farke spoke passionately in Friday’s presser of many things including this club’s habit of feeling sorry for itself very quickly when things go awry in the Premier League, so I guess, first of all, management, players and supporters must try and avoid falling into that particular trap.

Only hard work is going to make this right, along with a rethink of the 4-3-3 and eradication of the defensive cock-ups. But until then…

Keep the chins up. Still 33 more chances to get some points.