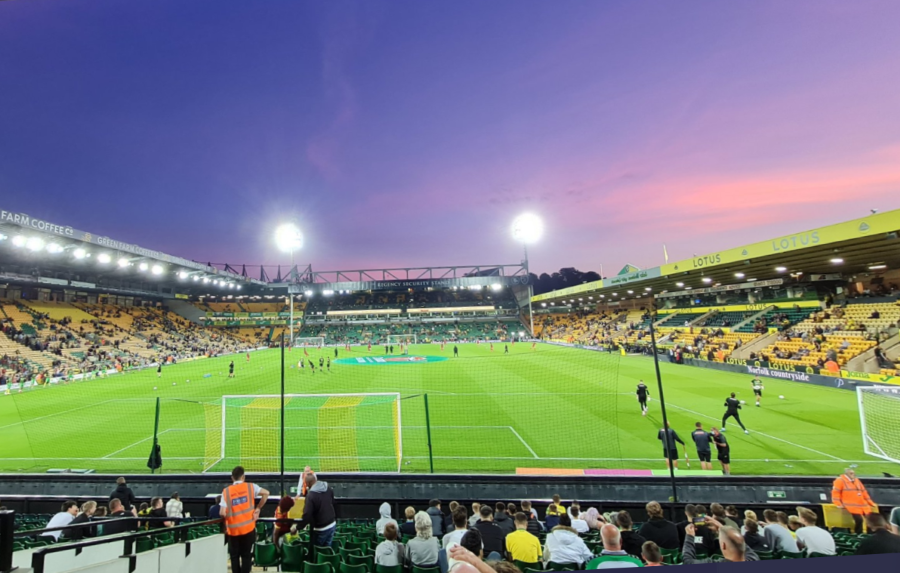 Another match, another loss for City as they were unceremoniously dumped from the Carabao Cup last night, but after the repetition of a familiar result, at least the script felt slightly altered.

After weeks of the same old naivety, defensive errors and lack of creativity, it was courteous of the Canaries to throw in some penalty drama, a new system that worked until its players didn’t, and the return of the familiar set-piece Achilles heel. The Watford-shaped wound remains open, however, and doesn’t look like healing until three points are on the board.

With Billy Gilmour at the heart of proceedings and finally allowed the space and attention he requires, Daniel Farke’s side put together a series of strong passing combinations and looked a threat.

The German’s new 3-5-2 looked dangerous in the Liverpool half despite the lack of exciting attackers in his lineup, and Dimitris Giannoulis gave the impression of a man desperate to earn back his spot after losing it to Brandon Williams in recent weeks.

Christos Tzolis’ excellent movement created a pathway for the likes of Gilmour and Giannoulis to get the ball forward effectively and had his end product been more finely tuned, Norwich could’ve returned to the dressing room in the lead.

Giannoulis was set free by his new wing-back role, and credit must go to Ben Gibson for his unseen role providing a solid base for the Greek to play from down the left, even if the ex-Middlesbrough man was guilty of lapses in concentration at key moments.

In 38 minutes of focused performance, City showed green shoots of promise and had they kept that level up for 90 optimism may just have crept, in small doses admittedly, back into Carrow Road.

However, the two incidents that defined the match, and predictably highlighted City’s issues this season, bookended this period of promise.

In the fourth minute, Minamino inexplicably found himself in space following a Liverpool corner, finishing inside the six-yard box after some woeful defending. In the 42nd Tzolis seized the ball from designated penalty taker Adam Idah and promptly found the legs of Reds’ goalkeeper Caoimhin Kelleher.

That both incidents epitomised their start to the season is the most worrying sign for this City team, and the collective sentiments of ‘here we go again’ felt around Carrow Road and in living rooms around the Canary Nation were palpable.

City are dangerously slipping into a rabbit hole they are not keen to explore, and a repeat of the miserable Project Restart series could look even uglier given fans are now back in the stands in NR1 and free to voice their displeasure in grim reality.

Ex-Canary Peter Crouch was surely referring to this exact feeling of déjà vu in his Daily Mail column, where he said: “The relegation we suffered at Southampton in 2005 will always stick with me. The lack of confidence in the dressing room, the acceptance of defeats.

“We won only one of our first 12 games that year and it can overwhelm the group. It certainly did with us. We expected to get beaten. When that dressing room is silent, that is when you know you are bang in trouble.”

Twinned with this uneasy feeling of history repeating itself was a fresh new form of despair to this City regime: a spat over who takes a penalty before the selected taker’s underwhelming miss.

Farke outlined exactly what the situation was and quite how irritated he was with it post-match. “Christos [Tzolis] was not the first [penalty taker] on the teamsheet,” he said. “If you do this (take the penalty despite not being the chosen taker) you have to make sure you score otherwise you are in trouble.

“He was unbelievably emotional and excited but that’s what happens with young players, they take the wrong decisions. I was a bit annoyed that none of my older players was aware that he shouldn’t take the penalties.

“I love this guy and he will be an important player for us in the future and in general he had a really good performance. But believe me, after I have spoken to him, he will never do this mistake ever again in his life.”

As if there weren’t enough issues for Farke to deal with.

The former Borussia Dortmund II head coach insisted that “the topic is done,” but will surely be frustrated that the man who looked at times the solution to the Canaries’ attacking problems has complicated his selection situation ahead of their crucial run of games.

New issues may have reared their head, and the script – while almost as miserable as before – felt slightly altered as Norwich were beaten once again, but the solution to Farke’s problem is clearer than ever before: a win by any means necessary.