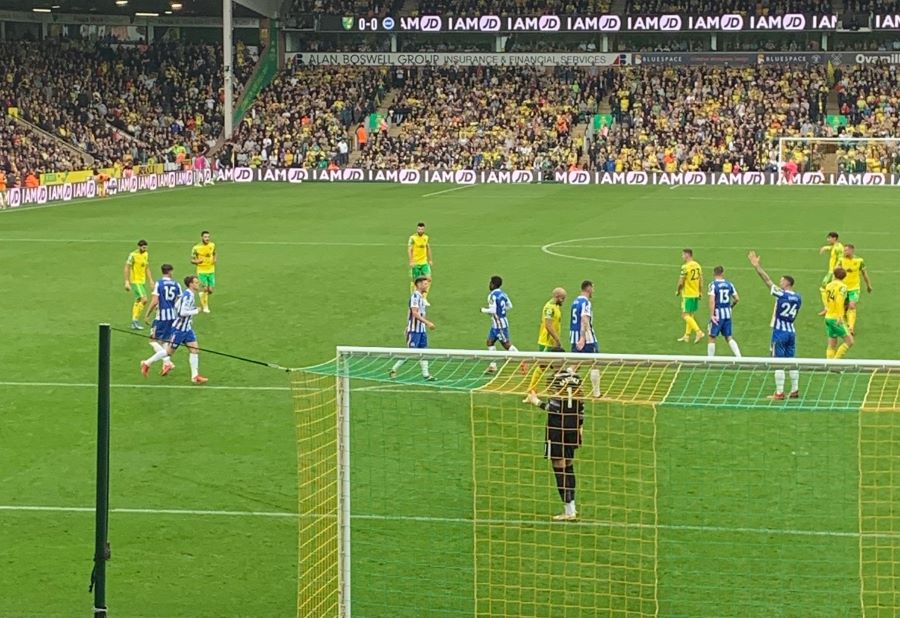 There was a sense of cautious hope, some may even say optimism going into this game. Farke resisted the clamour for the darling of the national media, Billy Gilmour, to be included and elected to play an unchanged side, apparently citing the lack of time that the squad had had together since the last game.

The game began nervously.  Brighton pressing City high up the pitch, as seems to have become the standard tactic for opposition teams in the first 15 minutes.  City looked edgy and when they won possession, they struggled to retain the ball.

After 10 minutes, Sargent did well to win the ball from a City throw-in which triggered a spell of meaningful City possession.  They immediately began to look a little brighter and sharper and were moving the ball quickly and accurately in the Brighton half.  Eventually, a good ball forward found Sargent who, with his back to goal, spun and got off a shot which was deflected wide by Dunk for City’s first corner.

Brighton appeared to be playing the wrong game at times – 2 yellow cards in succession for rugby-style tackles, both in areas of the pitch where such antics were unnecessary.

Throughout the game, Brighton were quick to break. On 18 minutes, they took a quick throw. Gibson reacted first but could only play the ball out for a corner.  From this, City won the first ball but the clearance fell to Lallana whose shot was beaten clear by Krul, who then recovered quickly to claim the rebound effort.

Moments later, a loose ball in midfield bounced through the Norwich defence to leave Maupay bearing down on Krul.  He was always stretching for the ball and fell theatrically as he lost the ball.  Replays showed the faintest of touches on him by Krul, but the Dutchman reacted furiously, manhandling Maupay back to his feet.  Nerves were on edge as VAR checked, but the contact was not considered as a clear and obvious error and the game played on.

City were working their way into the game as the half wore on. Pierre Lees-Melou was outstanding, making interceptions and tackles at the back, getting forward whenever possible. He now has the honour of replacing Alex Tettey as the recipient of the Carrow Road ‘SHOOOOOOOOOT’ whenever he gets the ball near the area.

Just before halftime, City spurned a golden chance.  Sanchez blundered with a clearance from well outside the area. From 30 yards, Sargent had an open goal but his shot was way too weak and was cleared.

The second half got underway with no changes to personnel but it seemed evident that City were keen to get Aarons more involved in the attacking play.  His counterpart on the other side of the pitch, Giannoulis had been one of City’s main attacking outlets in the first half whereas Aarons had looked noticeably cautious going forward.  Normann played 2 sweeping diagonal balls out to the youngster in succession, but on these occasions to no avail.

City were now pressing Brighton much higher, having seemingly earned their right to play in the game, and were preciously close to catching Brighton on a number of occasions.  The game was much more open with Albion less able to dominate and dictate the ball, perhaps City even in the ascendancy restricting the visitors to quick, dangerous breaks.

On 62 minutes, Lees-Melou, continuing his superb work from the first half, won the ball in the City half and played a great ball to set Aarons free.  Pukki initially lost the ball but quickly won it back, returning it to Aarons who played a peach of a ball through to the Finn.  Faced with the onrushing keeper, his little dink only found the side netting though.

Whenever City pressed forward, there was the ever-present threat of a Brighton break.  On 64, as he moved the ball forward, Normann slipped and was dispossessed by Maupay – Lees-Melou was there to stop him with a tactical trip.  Normann was becoming more prominent moving forward too, showing great skill juggling the ball before nutmegging the defender and being halted by the inevitable foul.

City were beginning to make decent opportunities, but never quite able to find the killer touch. Brighton were resolute in their defence and most efforts were blocked before troubling Sanchez.

On 73 minutes, there was a rare yellow card for Pukki.  Sargent did well to win the ball and his surging run set Giannoulous free, but only Pukki was in the box.  As Pukki fought for the ball in the corner, he was swiped off the ball but was off the pitch at the time.  His protestations to the Assistant Referee earned him the booking.

Rashica replaced Sargent on 74 minutes and although his physical presence was missed, the pace of the Kosovan immediately caused problems. By now, Normann was beginning to struggle with what looked like cramp and he was replaced by Rupp in a like for like swap, Farke presumably judging that the balance in the middle of the park would have been upset had the less defensively-minded Gilmour been brought on.

For the final few minutes, Idah relaced Pukki and nearly made an impact straight away. He won the ball and fed it to Rashica, who used his pace well. Unfortunately, Idah couldn’t quite get on the end of the return ball.

Brighton then had a short period where, for the first time since the first half, they were able to retain possession and play the ball around in the City half.  However, this only lasted a minute or so before Norwich won the ball back. A quick long ball up the pitch found Idah, who did well to hold onto it until help arrived in the shape of Aarons, who regrettably was unable to fashion anything from it.

So, a point gained or two points lost?  There will be those who would have wanted Farke to throw caution to the wind and go all out for the win.

With the ever-present threat of Maupay and a Brighton side looking to counter quickly, it is understandable that he opined otherwise.

On the other hand, out of small acorns a mighty oak doth grow.  2 draws and a City side looking solid and hard to break down.  Today they created chances, or at least half chances, which is in itself an incremental improvement on what has gone before. Sargent looks like he needs a bit more confidence finishing – a Dean Coney style finish would do to set him on his way!

On the few occasions when the City defence was breached, Krul was in superb form – a fingertip save in the first half standing out.

The midfield looked solid – the undervalued McLean worked hard, almost as a second left back at times, and with Giannoulous kept the City left pretty tight.

Aarons, although he did not get forward so much, was solid defensively.  But the outstanding performer has to be Pierre Lees-Melou -by far his best game yet and if he continues to improve at this rate, he and Normann will begin to form the basis of an imposing midfield.