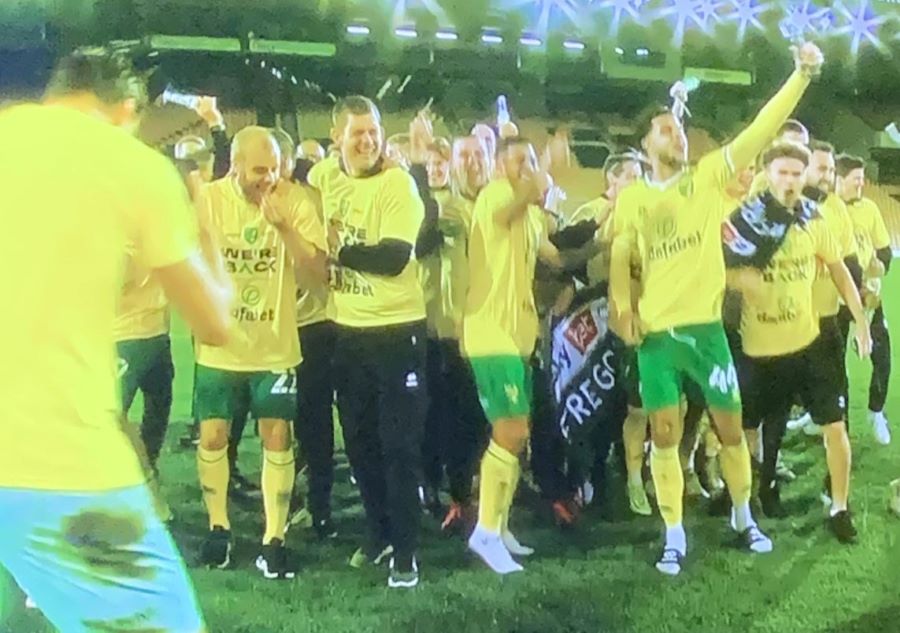 A friend of mine recently boasted about completing a job application and when asked for his religion, he’d put down ‘football’.

He didn’t get an interview.

But in the same way that people choose to label themselves according to their religious beliefs, when we tell people we are Norwich supporters, it becomes less about what we do (i.e. watch football) and more about who we are.

Part of our identity, which we reinforce through wearing the club’s colours and crest.

Mention any club and it will invoke some form of preconception about its supporters, whether that’s plastic glory hunters, beer-drinking hooligans or long-suffering masochists. Views that will be linked to the identity of the teams they support.

To those looking in, we are the yo-yo kings. Too good for the Championship; too poor for the Premier League, both financially and in terms of ability; destined to spend eternity in some form of footballing purgatory between the two divisions, alongside Fulham.

Those closer to the club will know that it is built on strong principles and values. A club that is trying to combat the short-termism that exists in football through the development of a stable and sustainable operating model. One that embraces inclusion and diversity and works tirelessly to embed itself within the local community.

There’s so much to be proud of but ultimately the metrics on which we are judged are points and league positions and sadly, when mixing with the elite, our approach simply doesn’t seem to work.

The praise and accolades that accompanied our Championship titles, replaced by widespread disapproval and ridicule.

Promotion to the top flight feels like getting an invite to a Black-tie dinner.

Last time around, we turned up in jeans and a T-shirt, grabbed a few canapes and a glass of fizz, busted out a couple of moves on the dance floor, before seeing ourselves out the door. This time, we’ve gone to the trouble of putting a tie on and hiring a cheap suit but find ourselves standing in the corner alone, whilst the other guests wonder what the hell we’re doing here.

The collective resolve that ran throughout the club and support for doing things ‘our way’ is wavering and it seems that the club is going through something of an identity crisis.

Without wanting to reopen a debate that has played out countless times already, nothing illustrates this better than the failed sponsorship deal with BK8.

In purely financial terms, it was a no-brainer. The most lucrative deal on the table, which would have unlocked the ability to strengthen the squad further. The associated cost of the deal was to alienate a huge part of our supporter base.

The decision to sign and subsequently revoke the deal, alongside the fierce debate that followed, is indicative of a club that is struggling to stay on its chosen pathway. One that is increasingly conflicted between sticking to the masterplan whilst adapting to the top flight.

But it shouldn’t be a surprise, because the pursuit of financial advantage to the detriment of core values lies at the very heart of the challenge that the Premier League presents, whether that’s sponsorship deals, ticket prices, the tenure of managers, or changes in ownership.

If we, as supporters, struggled coming to terms with the marketing strategy of a betting company, how would we cope with a takeover bid financed by a country with an appalling record on human rights?

But it’s not just off the pitch where our club is facing an identity crisis.

Since Farke’s arrival, we have been treated to some breath-taking football. A possession-based masterclass from a squad built around gifted technicians.

Sure, we’d have regular defensive howlers and still can’t defend a set-piece, but it mattered not when 65 per cent of the time we were knocking the ball around like prime Barcelona.

Despite coming up against better players, it seemed as though we were still prepared to go toe-to-toe against the best. Who can forget the plaudits we received for playing through Man City’s press in what remains the solitary standout performance by Farke’s men in the Premier League?

And yet, just like Alex Neil before him, the pressure and scrutiny that comes from being outplayed and on the wrong end of results week after week, has brought about a change in approach.

The desperate search for points has forced a change in formation. An attempt to create a solid defensive platform on which to try to build some form of forward momentum. It’s an entirely sensible thing to do and yet we currently find ourselves looking completely devoid of attacking intent whilst utterly fragile at the back.

But more importantly, we don’t look like ‘us’ anymore.

The footballing principles on which this team has been built have gone and the players who were recruited to carry out a specific game plan look increasingly lost and lacking in confidence.

Ultimately, we have to decide who we are as a club and the value we place on being in the Premier League.

When we identify ourselves as Norwich supporters is it more important to us that we have top-flight status or that we have ‘poor millionaires’ who are genuine fans running the club? Do we care enough about what logo sits on the front of the shirt, if that shirt is being worn by a striker who can bang in 20 goals a season?

I don’t know what the answer is. If I did, I’d be submitting my CV in to Carrow Road.

I probably wouldn’t list football as my religion though. That doesn’t seem to work.