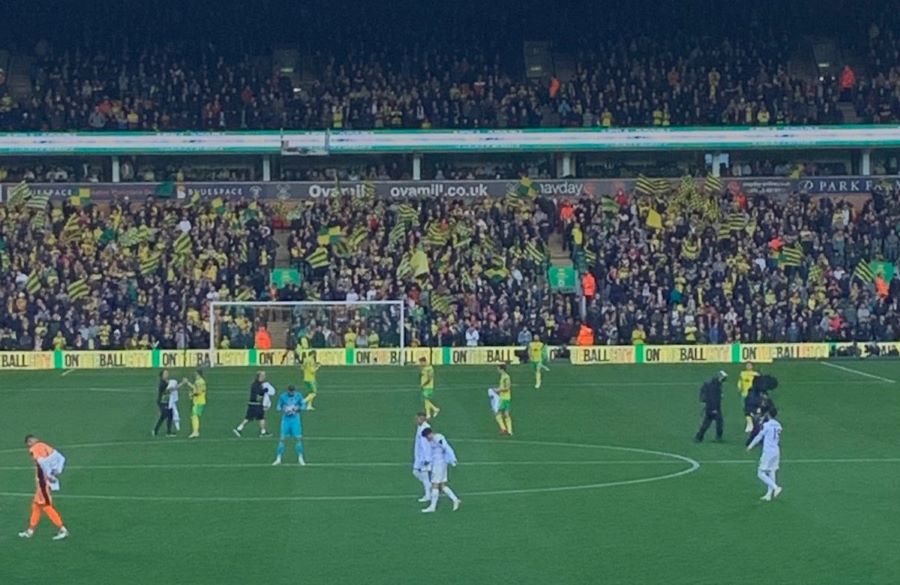 You know when you sign up to be a City fan that the gig is generally a tough one. There’ll be some highs but to really feel the joy they bring you have to have experienced the heart-wrenching lows. And there are more of the latter.

That’s a given. If we weren’t prepared for all of that we’d have already hopped aboard the glory trains to London, Manchester or Merseyside.

Yet amidst those extreme lows, there are usually one or two little nuggets of joy that remind us why we do it; why we are prepared to regularly have our hearts broken. A brilliant goal, a moment of genius, an unexpected win even.

But right now, there’s none of that. Nada. It’s joy-less.

And even worse… that feeling of impending doom that we all feel in the hours and minutes leading up to kick-off is shared by the players. For all the pre-match chest-thumping and fancy words, it didn’t look as if they believed they could win that game yesterday.

To be fair to them, there was a response to the Chelsea shellacking in terms of endeavour and grit, but that simply had to happen anyway. Carrow Road may not be a seething cauldron of venom – Stuart Webber noted that (as a compliment) in his address to the Canary Nation last week – but the old place would not have tolerated a lack of effort yesterday.

But those players didn’t appear to believe they could get three points. They’ve forgotten how. To play in the yellow and green is, right now, as joyless as it is watching them.

No spark, no cohesion, no invention. In 2007-08 Derby County’s amassed a miserable 11 points. Where are we getting another nine from?

That’s the question my uncle and I pondered as we trudged back to the car yesterday afternoon. Being the wise old head that he is, he did remind me that football, being the daft game it is, may throw up a City win when we least expect it, but it was said with a wry smile.

As at 4pm yesterday afternoon, neither of us really believed it.

It will come though, but when you’re talking about wangling a single win from somewhere as some kind of triumph, then you know the brown stuff and the fan have already collided. And we’re ten games in. Ten.

For it all to have unravelled quite so spectacularly is crushing. To be so blatantly uncompetitive is soul-destroying.

It’s six months to the day since a happy band of die-hards mustered on the far side of Carrow Road, opposite the main entrance, to laud the Class of 2021. Kenny danced, Emi jigged, Skippy waved his crutch, Tim cheer-led and Delia sang from a window.

We knew what awaited us and we knew, from experience, it would be another massive challenge, but as summer progressed and new signings appeared through the Colney doors at regular intervals the belief grew.

It felt as if Stuart Webber had made good his promise to learn from round 1, where he admitted to arming Daniel Farke with little more than a water pistol. Even minus our want-away five foot seven of football heaven it felt as if, as a collective, we were better prepared.

We even braced ourselves for the proverbial roller-coaster but even that was overly ambitious on our part.

A rollercoaster has ups and downs. This season, Norwich City trades only in downs.

The aforementioned unravelling has been on an industrial scale. So much so, the team we watched yesterday is one none of us recognises anymore. The identity of which we have become so accustomed and so proud has gone. Totally. In fact, there is no longer an identifiable method and style.

The formation yesterday flitted between a 3-4-1-2 and a 4-4-1-1 depending on whether we were in or out of possession but neither looked a particularly comfy fit for those asked to implement them. It was, by the end – and this is not easy to say – a shambles.

The second Leeds goal of the game, the second self-inflicted blow of the afternoon, was effectively the end of it as a contest. Every last bit of belief and fight had been harnessed to get the equaliser but the buzz lasted just two minutes and once Rodrigo’s shot had fizzed through the outstretched arms of Krul, there was nothing left.

There was no shape, structure or cohesion. We looked like a Championship side who were about to lose to a very ordinary Premier League side; one that could well have a relegation battle on their hands.

But our fight is no longer against relegation. Already the gap looks insurmountable – at least it is based on all the evidence. Our fight is with ourselves; to prove to ourselves that what we’re dishing up now is not the Norwich City we want it to be. It’s a battle to regain some self-respect, and perhaps the respect of those on the outside looking in.

Because right now there is none. They’re laughing and mocking.

Two seasons ago we bemoaned what happened at both extremities of the pitch while agreeing that what happened in the middle third was actually pretty decent but now there is little to excite us even in said middle third. Minus Buendia we are horribly devoid of a creative influence.

I’ll not, for now, delve too deeply into the managerial situation because Webber made quite clear last week that the head coach’s job, despite the growing body of evidence against, is as safe as houses. Knee-jerk reactions to defeats are not the Webber (or Delia) way but I’m not sure any reaction to a record of no wins in ten is knee-jerk.

Part of the problem is that we all still feel a lot of love for Daniel Farke for what he has done for the club. He has proved by any metric you like that he is an outstanding coach in the second tier – no question – and we love the way he handles himself, how he speaks and how he differs in manner from almost any other coach.

His honesty and ability to dissect and explain is to be admired but yesterday, for the first time, he sounded like a man with no answers. He alluded to it being a good performance when it clearly wasn’t.

He did, again, make reference to the straitjacket in which he is working, aka self-funding, and while being non-critical of it, it is clearly an ongoing issue if this club wishes to be a competitive Premier League club as it maintains.

Two clubs with very rich owners will go down this season, but it’s the self-funding one that is set adrift without a paddle. Those other two, whoever they may be, will be competitive and will probably take it to the wire.

We won’t be taking anything to the wire.

It’s looking increasingly likely that this model, as much as we love it the ideal, is incapable of supporting a top 20 football club. Maybe the answer all along was to keep with that “top 26” mantra and accept our fate as drifters between the two divisions and just hope we don’t eventually get subsumed into Championship mid-table mediocrity.

Those at the very top table need to have a serious think about what they want this football club to be.