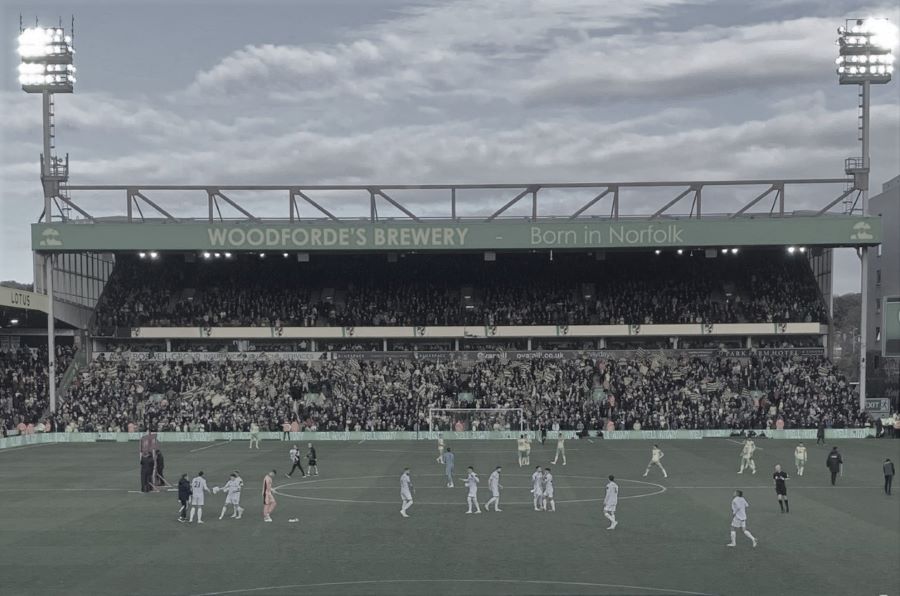 City’s pass completion rate during the 2-1 home loss to Leeds United was 67.1%, their lowest since February 2019, 119 games ago. What is perhaps most relevant is that the game in question was a 3-0 defeat of Ipswich.

Football fans can accept losing, and they can handle unstylish performances, but not the two together. That 3-0 victory may not have been altogether elegant and attractive but it was a win against City’s bitter rivals to take them top of the league.

Thirty-three months later, as the Canaries limped to their eighth loss of a ten-game-old season with a similarly ugly style of play, their supporters were left wondering what is left to savour.

When Norwich were relegated, humiliated even, during the 2019-20 season, they at least went down with a fight. The nine eerie Project Restart fixtures had an air of resignation about them but only after Daniel Farke’s young side had swum defiantly against the tide for 29 fixtures, passing their way to some beautiful moments on occasion.

Stuart Webber has been keen to rubbish suggestions that this campaign has been worse than that relatively dismal effort, saying: “Two years ago was very different, we were miles off. I know people can look at the performances at the minute and go, ‘they don’t look much better,’ and I get that. Watching that Chelsea performance, I’d look like an idiot saying ‘we’re miles better than two years ago.

“But two years ago, we didn’t have a go. This summer was very different, we’ve got a squad full of internationals, we know we’ve got enough quality to stay in this league.”

It may be true that more money has been spent and more ambition is present at the Lotus Training Centre, but there’s been more evidence of regression than improvement on the pitch.

Although there may be more time to salvage the 2021-22 season, at least City fans were able to feel a semblance of pride when they were being labelled the best bottom side in Premier League history. At least there was a morsel of entertainment as the Canaries regularly lost playing brave and exciting football.

If their last Premier League campaign was an ambitious and ultimately unsuccessful mission, this is them failing more miserably than any side before them while attempting a fairly common and uninspiring goal.

There are countless clubs who have been promoted to the English top table, recognised the technical deficiency of their squad and attempted to hoof, scrap and time-waste their way to survival.

Some have been successful (Burnley, Crystal Palace, Brighton and more), many have been less so (West Brom, Cardiff, Middlesbrough etc). But none have put up less of a fight than this current Norwich City group, and there is absolutely nothing for fans to cling on to when bottom of that list.

Even the most impressive of Farke’s players are producing moments of frustration and impatience when slowly progressing the ball had been City’s previous identity.

Mathias Normann made 20 unsuccessful passes and at one stage looked incapable of retaining possession. Perhaps this is an apt time to take note of the fact that Scotland’s best and most reliable passer sat on the Norwich bench for the entirety of the afternoon.

The only moment during the whole match when things truly came together was when Andrew Omobamidele headed home his first senior goal – and the Irishman’s admission that City are “most vulnerable when [they’ve] just scored” tells you all you need to know about the mentality issues at Carrow Road.

So the question becomes ‘what next?’ for Farke.

The German had the opportunity to revert to his trademark patient style against Leeds and yet opted for his most direct approach yet. If reversion to ‘Farkeball’ is not the answer, will Norwich attempt an even more rudimental style when they visit Brentford next Saturday?

#ncfc take the fun out of quite a lot really

✍️We are delighted to have completed the loan signing of Nairn-based midfielder, Kenny MacInnes from @ElginCityFC 🥳 More details here 👇

What this doesn't show is the moment the Sutton keeper (Roffey?) went over and shook Flecky's hand after he completed his hat trick. The spirit of the game and the former magic of the Cup encapsulated. #ncfc

Fans hit out at the FA for handing out ban to Wigan player over flare 'incident' - https://fanbanter.co.uk/fans-hit-out-at-the-fa-for-handing-out-ban-to-wigan-player-over-flare-incident/