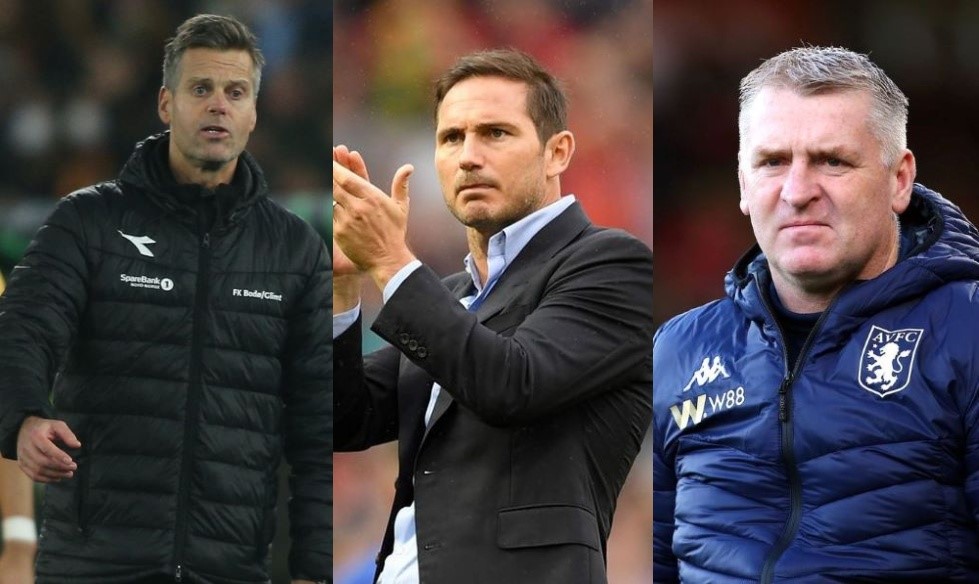 The last few days of post-Daniel Norwich City have been a whirlwind of very little information.

A tweet from a renowned in-the-know City aficionado at the start of the week suggested that Norwegian coach Kjetil Knutsen from Bodo/Glimt was going to be the replacement for Farke.

Shortly afterwards the usually reliable John Percy of the Telegraph announced that Frank Lampard was in talks and so the pendulum swung back.

As we sit here on Friday morning, TalkSport boldly announced this morning that Frank Lampard was on the verge of agreeing to become the new boss, and last evening Sky reported that Dean Smith had just conducted a very impressive interview with the club’s hierarchy.

How much, if any, of this is based in reality, we can only speculate.

It certainly wouldn’t be beyond the likes of Sky to throw in a new name just to drum up a few more quid for SkyBet, or for TalkSport to make up some utter drivel just to pad out their programming.

Where I am, and where I believe many of the yellow and green faithful are, is attempting to prepare myself to back the new coach, regardless of who it is.

Knutsen is an easy win for me to get behind. Little known, but an increasing profile due to unprecedented success for a smaller club and an exciting attacking playing style. Ticks the boxes that I like in a City boss.

But is he too inexperienced? Or too similar to Farke? Will our cadre of international Premier League players get the lift and confidence they desperately need from a coach they’ve never heard of whose CV consists of Norwegian league football?

Dean Smith has always struck me as a nice bloke, a student of the game, and someone prepared to give new ideas a go. Someone who has worked under a similar structure to ours when at Brentford, and who would buy into the club ethos.

But how damaged is he by the Villa experience? There has to be a rawness from losing his dream job less than a week ago surely? And for all his positive points, did he just get the best out of a one-man Grealish-led Villa only to find that he could no more survive without him than Farke could Buendia.

The most difficult for me to get behind though is Frank Lampard.

Everything about him immediately screams wrong to me. The experience of him rocking up at Derby with barely a coaching badge to his name and having the national media fawn over him for a season was nauseating. He then gets another job he hasn’t really earned, jumping the queue of managers who have proved themselves, and I spent a season and a half-hoping he’d fall flat on his face at his boyhood club.

But you can see where the thought pattern began because there is something of the overprivileged about Lampard’s managerial career thus far. A footballing class system that separates Lampard from the vast majority. He hasn’t done the hard yards in a comprehensive, learning his trade the way most have to. He’s had the express route to employment, straight into the job he wants based solely on name and contacts.

He’s not the punchy underdog that Norwich City aspires to be. He’s jarringly different to the humble Farke, the growling Glaswegian “Them Against Us” Lambert, or any other manager that has come to this fine club before.

Lampard is very much one of the footballing establishment. One of those that usually looks down from on high at the likes of Little Old Norwich. It could barely be more of a culture shock than if Prince William declared he was ready to give football management a bash and showed up at Colney enquiring where one might acquire a tracksuit.

Increasingly, as it’s become more likely, I’ve been trying to talk myself into viewing the potential appointment in a positive light, as I will for whoever wanders through the manager’s door eventually.

If you can possibly separate the Frank Lampard ™ media brand from the manager, he doesn’t have an awful CV. Get away from how he just wandered into a Championship job, and he did pretty well at Derby.

Yes he had money and inherited a half-decent squad (supplanted with a supply line of fringe first-team Chelsea youngsters), but as many a manager will tell you, you can have great players but if you can’t get them to play together you won’t be successful.

For a first-ever season in management, to get them organised enough to play good football and finish as a Championship play-off finalist is impressive whichever way you slice it. Not impressive enough to immediately earn a job with a top six elite club, but if you come with the Frank Lampard ™ media brand you get to jump a few stages of proving yourself.

Fourth place and a respectable if forgettable Champions League showing in his first season with Chelsea while blooding youngsters like James, Temori, Mount and Hudson-Odoi is not to be taken lightly either.

The following season and a mediocre (but by no means disastrous) period led to Chelsea showing him the door with a ruthlessness that, while not unexpected, must still have stung, as it will have Smith.

While he hasn’t exactly earned the opportunities he has been given, neither has he been a massive failure in either of them. For someone who has managed for only two-and-a-half seasons, he’s won a hell of a lot of games. Yes, he’s had the resources to do so, but so have a lot of other highly respected managers who’ve made a much bigger pig’s ear of it.

I think if we go back a few years and look at another Chelsea manager as a comparison, it might give us some perspective. Roberto Di Matteo didn’t quite get the leg up that Lampard did, but after reasonable stints at MK Dons and WBA, he parlayed a coaching role at Stamford Bridge under Andre Villas-Boas into the caretaker boss in March before winning the Champions League and FA Cup at the end of the season.

In typical Chelsea fashion, he only lasted until the following November but was then one of the most sought-after coaches in football for a while. Had the timelines been skewed and a figure like Di Matteo shown an interest in the Norwich job, I tend to think we’d have welcomed him with open arms. But then he didn’t come with the Lampard ™  baggage.

And while his achievements were hugely impressive, it’s difficult to say they were any more a part of his endeavours from March to May than Lampard planning and implementing a top-four finish in his first Premier League season, seen out in its entirety.

Putting all issues aside, Lampard does have ability as a manager. Whether it’s the right amount for the task at Norwich is another matter entirely. Is he up for his first experience of a relegation scrap on limited resources? Time to roll your sleeves up and get dirty with the farmers, Frankie.

We know the media frenzy will be awful. We know the “Frank Lampard’s Norwich City” will p1ss off everyone else in football as it did when it happened to Derby.

But maybe it’s time to embrace high profile. Maybe this is what we need to feel like a part of the Premier League that they don’t want to scrape off every May.

I’m deep into trying to persuade myself of the positives, whomever it may be.

If they can keep us up, I don’t really care who it is.