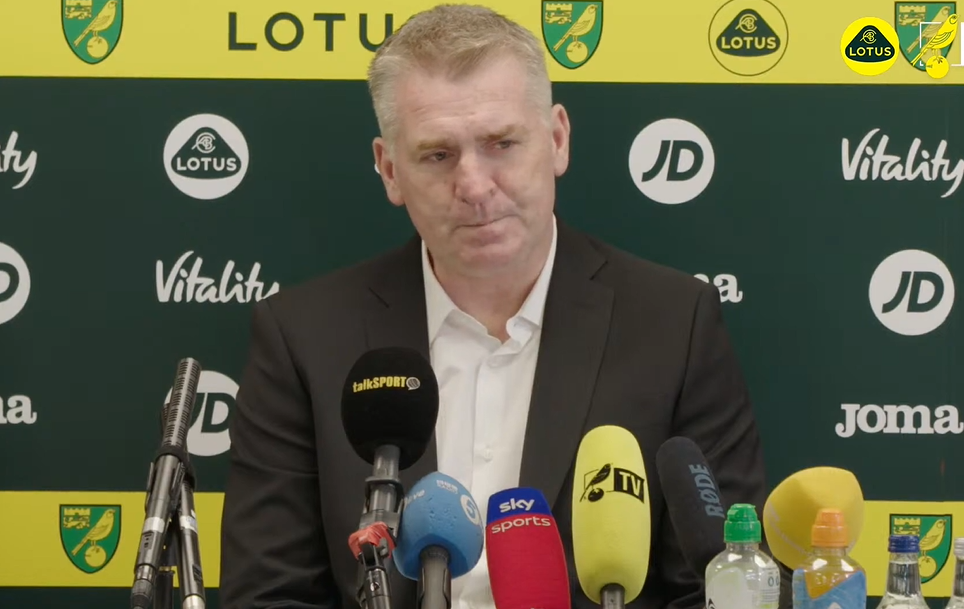 After City had won their first game of the season at Brentford – Normann and Pukki both scoring to give the Canaries an unlikely victory – it looked as if Daniel Farke would survive another day. Yet, nothing in football is guaranteed. The German was permitted a swan-song before being relieved of his duties.

The rumour mill went into overdrive the minute City confirmed the departure of the much-loved German, with Frank Lampard and Kjetil Knutsen the main names being thrown around.

Both offered the Canaries something vastly different; one a household name as a player trying to prove his worth as a manager still, the other a more Webber-like appointment – an unorthodox roll of the dice with the Norwegian favoured by hipster football fans.

The bookies got it wrong, however, and Dean Smith’s appointment became a formality after Lampard rejected the vacancy according to reports. Looking in from outside the Norwich City sphere, Smith’s appointment is a sign of intent from the Canaries hierarchy.

With Farke, his naiveties came to the fore in the top flight, and he appeared unable to change in-game situations to a large degree,

Smith’s Premier League experience will prove vital to Norwich but could the ex-Villa manager mount an unlikely relegation escape? But before I get carried away with what the 50-year-old manager could achieve in Norfolk, it seems right to look over his managerial career to date.

When you read what fans of Walsall, Brentford and Aston Villa have to say about Smith, the consensus is that he is a well-liked man, and these are hard to come by in football. Often a bad taste is left when a manager ups and leaves your football club, yet, Smith remains in the good books of all his ex-clubs.

In the four years he was manager at Walsall, Smith took the Saddlers from relegation favourites to promotion contenders. Throw in their first-ever trip to Wembley in the EFL Trophy in 2015, Smith had put the unremarkable West Midlands club on the map before exiting for Brentford.

Smith oversaw the foundations of what was to eventually become Premier League football when he was Brentford manager, initially winning over the neutrals with an entertaining brand of football. Joining Smith in west London from the Saddlers was Rico Henry who would become one of the Bees’ star men.

His first tangible success would come when he was given the almighty task of getting Aston Villa promoted; taking over the Villa with them marooned in mid-table in the Championship.

The success he enjoyed there was doubly sweet as it was his boyhood club no less and in those first few months the West Bromwich born man conjured up a 10 match winning run that saw Villa make the play-offs. They went on to beat Derby comfortably in the final and lifting the Playoff Final trophy aloft was an emotional moment for the 50-year-old.

Keeping Villa up in that first season when the club looked doomed to relegation and too far adrift to mount an escape was an achievement, as was the 11th-place finish in the season that followed.

But it fell apart for Smith in recent weeks, a gutting 3-2 home loss to Wolves at home saw his tight-knit Villa group start to unravel, and he was later relieved of his duties after a narrow loss to Southampton.

As the man who got them back to the top flight after fears Villa Park would be staging Championship football for the foreseeable, he is still held in the highest regard still in the claret and blue section of Birmingham.

So is Norwich City a good fit for a man just axed from his dream job?

I think so. Smith isn’t one for taking time out, after moving instantly from Walsall to Brentford, and likewise from Brentford to Aston Villa. He is a man who is obviously attached to the beautiful game.

The personnel at Norwich also works in the ex-Villa man’s favour, as his work with Jack Grealish could well translate to Todd Cantwell. Dropped by Farke this campaign, Smith could well get the best out of the enigmatic Cantwell as he did with Grealish, and as a man-manager by trade, he could well revitalise a number of under-performers.

While still at Villa Park, Milot Rashica was on Smith’s radar also and was rumoured to have nearly signed under his tenure in the Midlands. Smith can now utilise the Kosovo-born midfielder with the Canaries.

Stuart Webber nearly appointed Smith while he was at Huddersfield, so this combination has been some time in the making. Webber picked out Smith from a whole host of candidates for a reason, taking a liking to a manager who has tasted success in his managerial career.

Even if City do drop back into the Championship – which looks a real possibility – Smith has a Championship promotion on his CV, but it was his top flight capabilities that made him the ideal replacement.

Moreover, when you look closely at the methods and mannerisms of Smith, he is one who clearly values a defined culture at a football club.. This is crucial at Norwich City; a likeable, well-run and sustainable club that routinely punches above its weight.

Smith will buy into this but will want to change this approach to the top flight. It shouldn’t be treated as fleeting or temporary, but rather something to maintain and be consolidated, and he will want it to be a club that feels like it deserve to be amongst the likes of Liverpool and Chelsea.

After getting sacked recently, Norwich’s new boss will want to prove the nay-sayers wrong, and facing up against the club that put the dagger into his Villa tenure will be a huge fixture.

With favourable clashes against Wolves and Newcastle to follow, could Smith add another great escape to his managerial resume?

He isn’t, of course, a miracle worker but with Villa coming to Norfolk in the middle of December, it will be intriguing to see where the Canaries find themselves a month or so into his reign.